The Digital Comic Museum is a treasure trove of public domain comics. Hundreds of pre-1959 comics have been scanned and are available there for free downloads. One gem in the bunch is the full run of Avon's Strange Worlds. Like most anthology comics of the period, some of the contents are not worth your time or trouble -- but the good stuff? Well, the scans below pretty much speak for themselves.
Highlights of the run include multiple stories by Wally Wood, Everett Raymond Kinstler and Joe Kubert. You'll also find Wood collaborating with Al Williamson, Frank Frazetta and Roy Krenkel in Invasion from the Abyss in #3.
Many of the scans posted at the DCM are unedited -- and as such, the blacks are washed out, the colors muted -- the tanning paper of the vintage comics making the pages too dark. I'm grateful for the work done by the original scanners, but I can't help but mess with the images a bit in Photoshop to make them more pleasing to look at. The cover of #4 is presented here as a "before and after." You might prefer the unaltered scan (shown first) -- but I like 'em cleaned up a bit. In either case, it's a great Wally Wood image. Most of the scans posted here have been reworked by me. You can get the original versions at the DCM. 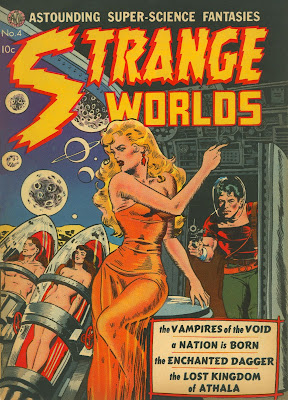 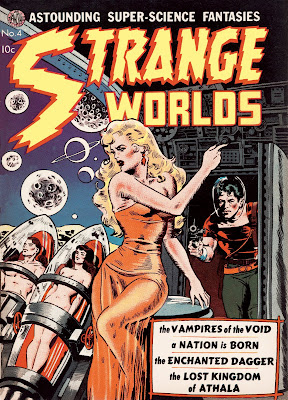 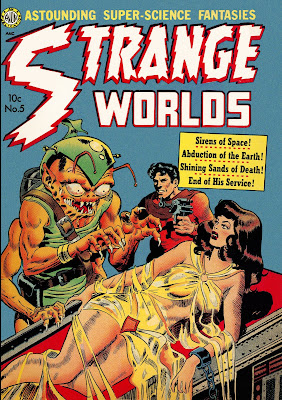 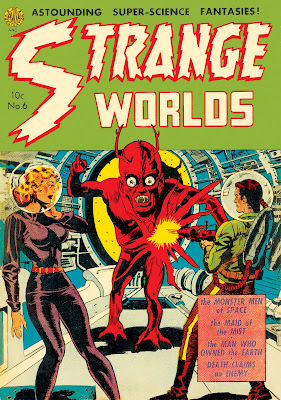 Issue #9 sports a nifty cover, credited to Syd Shores by the DCM, though the Grand Comics Database has no credit listed. 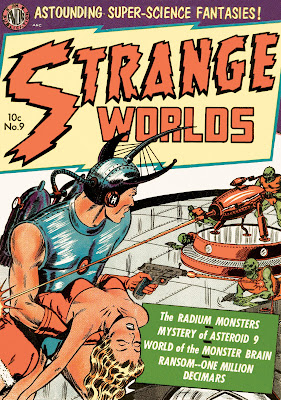 Strangely enough, the title morphed into a war comic with issue #22! It sports a handsome Ray Kinstler cover, though! 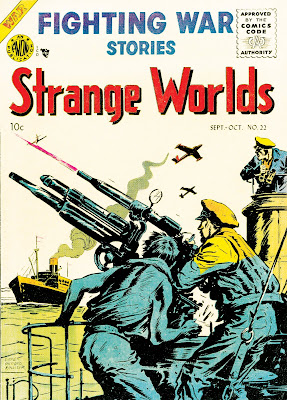 The Flame Goddess from #3 has a particularly attractive splash page -- art by Sid Greene. 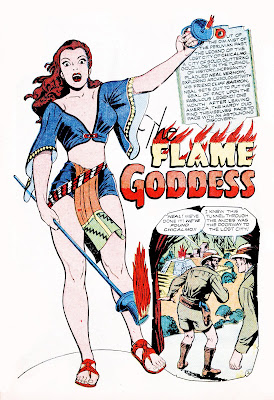 A selection of Wally Wood pages -- especially sweet are the black and white inside covers. 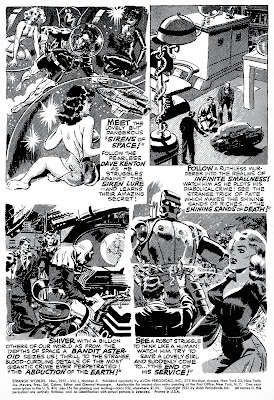 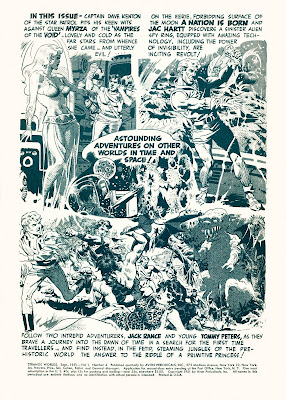 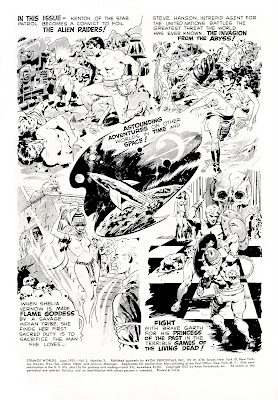 Wood's drawing here is still in the formative stage. It has all the "Wood-isms" one has come to expect, but he's not quite the mature artist he'd be just a few years later at EC. 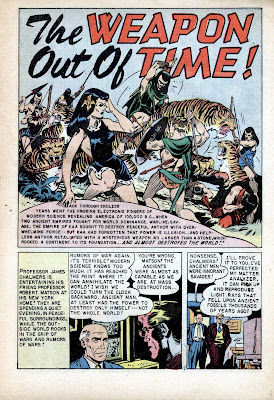 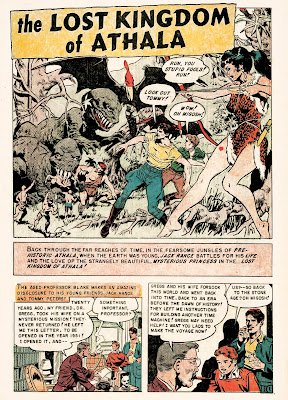 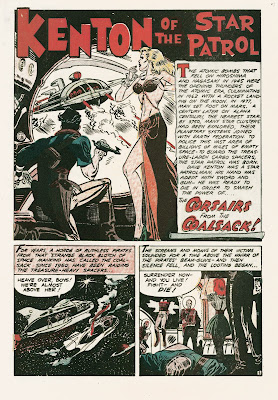 Some examples of Everett Raymond Kinstler's contributions to Strange Worlds are shown below. Serious film fans ought to recognize the movie stills Ray used as reference for some of these images. Ray leans a little on Alex Raymond in his Kenton stories -- and dig that Hal Foster swipe in the bottom right corner of the first page shown here! No offense meant to Ray -- one of my favorite artists ever to draw comics. "Swiping" was a common thing in the early days of comics, and most artists had a file of movie stills as well as Raymond, Foster and Caniff strips to be used as "reference." 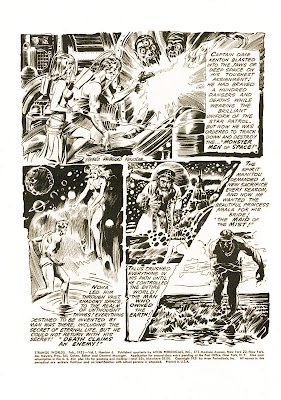 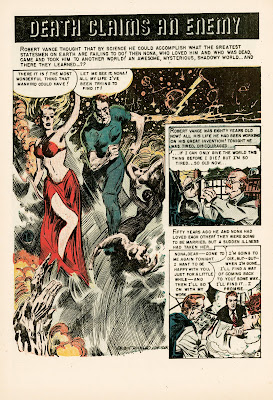 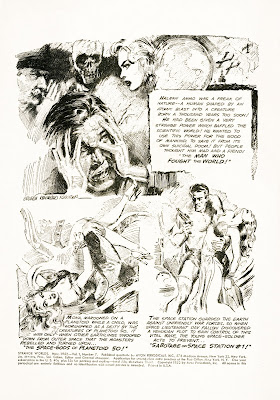 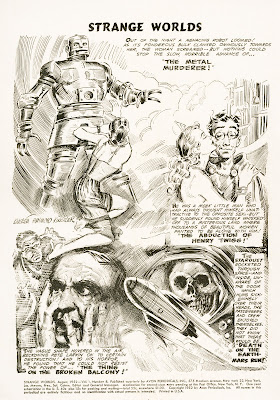 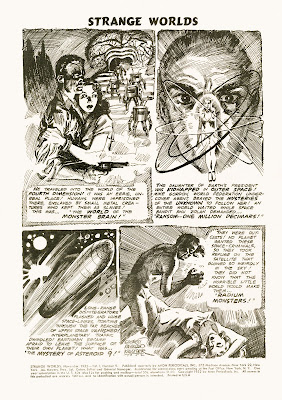 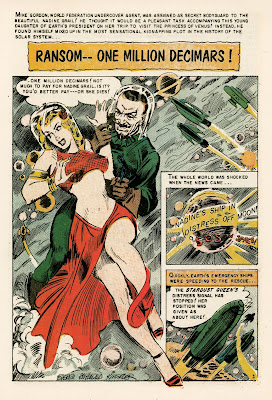 Wow, thanks for this. The only Kinstler comic work i was aware of was the Silvertip stuff, which I love. And he worked with Wood? Too cool!

The GCD gives 338 separate comics credits for Kinstler -- so he did a lot more than SILVERTIP. His ZORRO comics are some of my favorites.

Wonderful stuff! Wally Wood IS sci-fi to me.

And--I found a another Kinstler swipe! Third page down, the frightened man with his hands on his face. Compare this with Graves Gladney's classic 04-15-40 cover painting for THE SHADOW:

Great work Terry! I like the touch up.
Since you can't smell and touch them, there's no point in looking crumbly.
I also appreciate being led to the site . I'm having a lot of fun browsing through them. I delete a lot of course. Some I keep. Early Walt Kelly Animal Comics I've decided are a keeper.
I may have a go at going beyond swiping and using grabs of some of this art as bkgd elements in a Flash motion comic. I'll credit the artist.