Here are the Rex Morgan strips from late November to mid-December. The first Sunday page is another seasonal stand alone strip. It doesn't advance the story any -- just establishes the time of year and lets me work on showing Rex and Sarah and how they relate as father and daughter. And gives us a little happy moment before the next storyline starts.

The snowmen are a tribute to the late Richard Thompson, artist of Cul de Sac and the still-with-us Bill Watterson of Calvin and Hobbes fame. I just wanted to tip my hat to Richard and acknowledge his remarkable work and his unfortunate passing. His pal Bill seemed an appropriate addition. 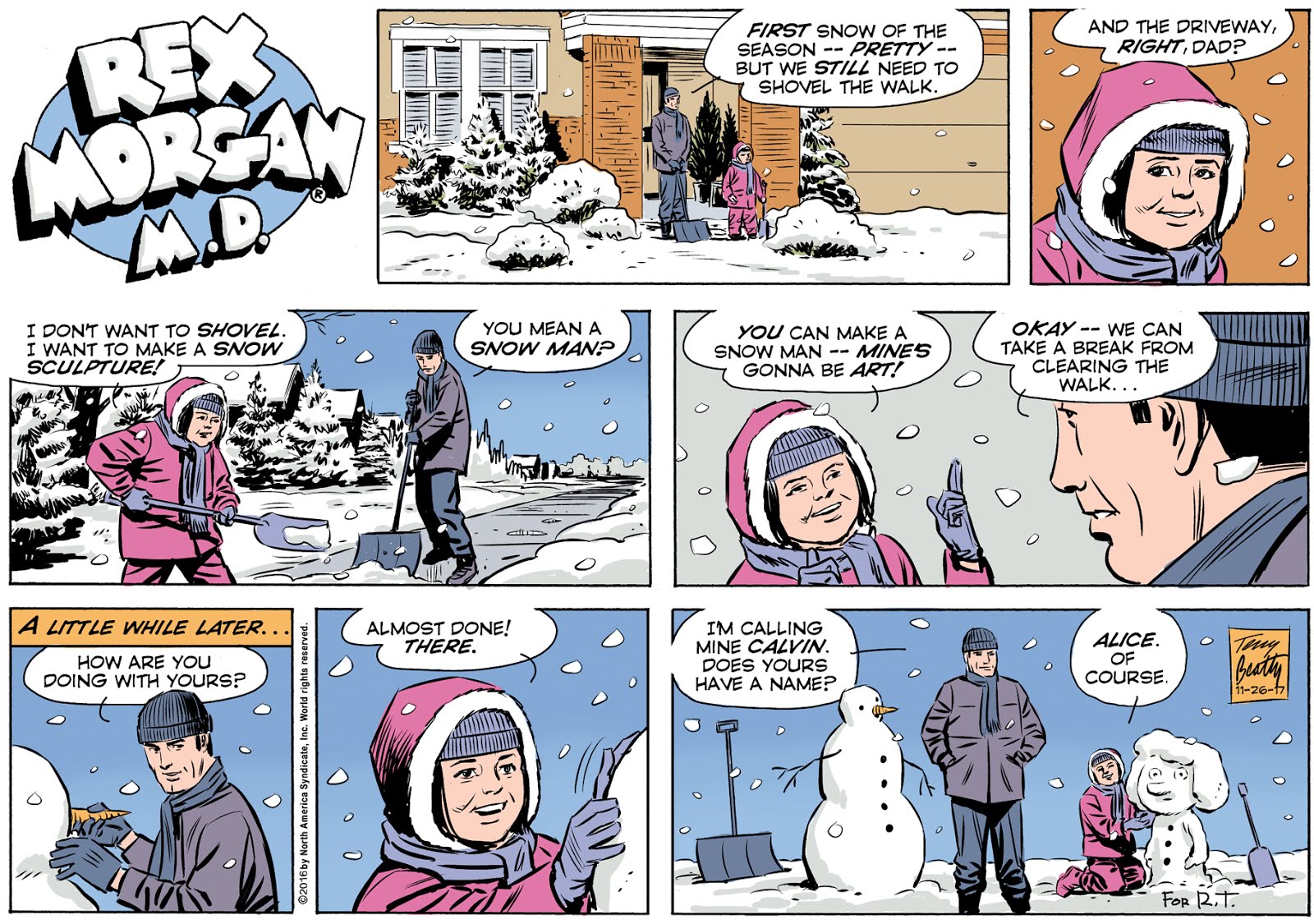 I wanted to start aging Michael in "real time," since, frankly, there's nothing much to do with him
as a baby, except create a reason for June to stay home on extended maternity leave. It'll take a couple more years to get him where I want him to be for more interaction with Sarah and acting as a full character on his own. The first birthday crept up on me mighty fast -- so I'm glad I didn't miss it somehow! The several days of getting Sarah ready for school were designed to lull the readers into a false sense of security -- "Nothing's happening!" they whined -- and then, BLAM! Sarah's accident in the Saturday strip. Don't assume I don't know what I'm doing, folks.

I had initially planned to have Sarah in a car accident -- unbuckling her booster seat's belt to pick up a dropped book or something, at the same time a truck skids on the icy road and hits the car. June would have been driving -- Michael in the car, too. But because of her unbuckled belt, it's Sarah who is injured.

And then there was a big ol' car accident sequence in Judge Parker. Considering that JP is Rex's "sister strip" and runs in a lot of the same papers, I felt I needed to switch gears. I had recently seen some disturbing videos of cars running school bus stop signs, nearly hitting kids -- in some cases they did hit kids. Gears switched. 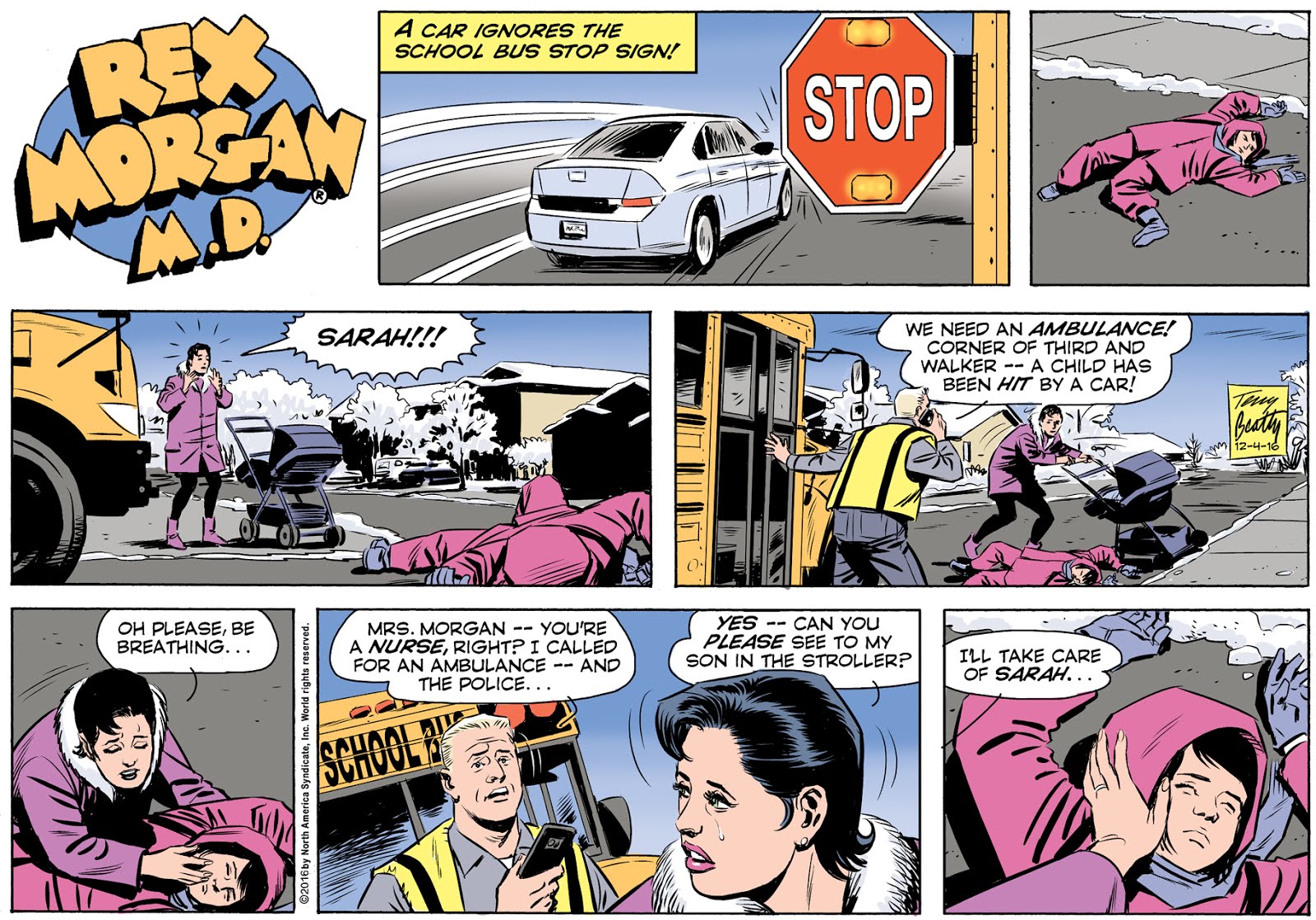 Sarah's accident came at an unfortunate time for one of our subscribing newspapers. There had been a deadly bus crash in Chattanooga just the week prior to the scheduled running of these strips. Though the Rex story does not involve a bus crash, it still is a bus-related accident, and the paper felt it would be too upsetting to local parents to have this sequence run there. I support their decision to drop the last panel of the Saturday strip and the entire Sunday. There is no way to predict this sort of thing -- all you can do is respond. I had already tried to draw the sequence without exploiting the violence of it (not actually showing Sarah being hit) and in the hospital sequences cut way back on what would really be happening with Sarah -- explicitly to avoid triggering upset in parents who may have gone through this sort of thing. Trying to keep it all "soap opera" and non-specific. All on purpose. And still, we had a problem.

One mea culpa here -- at this point I should have been drawing Michael in a toddler stroller, not the baby carriage-style stroller shown here. He's too big for that. My bad.

Also some have questioned Sarah riding a public school bus to her private school. Well, there are communities in which there are "ride to school" programs in which students at private or charter schools ride public school buses to school -- the parents pay a fee for the service. I didn't feel the need to explain that in the strip, since it's not really a story point, and kind of a boring detail. 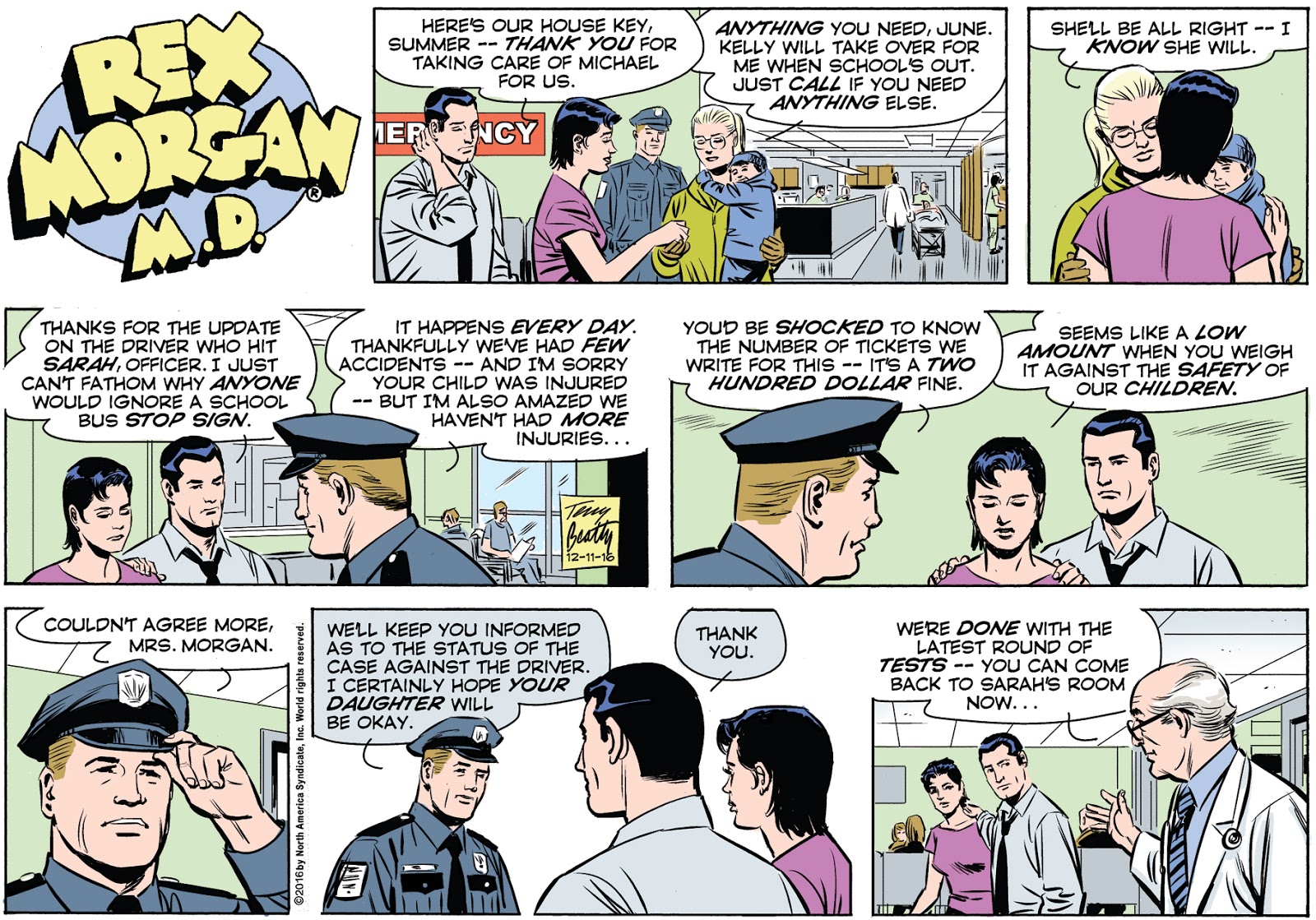 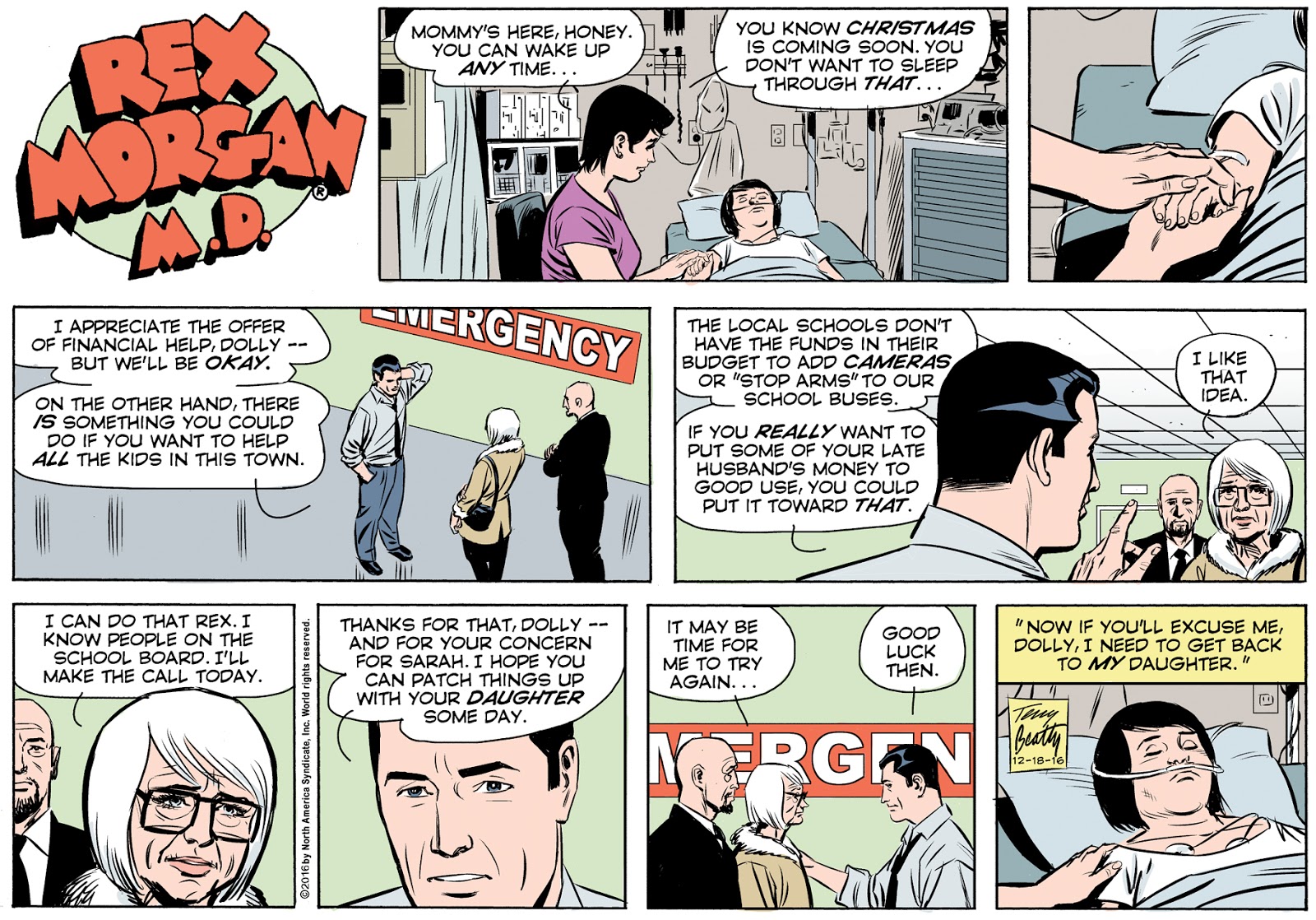 Dolly and Bugsy make their return to the strip, as we reveal the truth about her daughter. I faked out most of the readers, who believed the daughter had died -- but I never once said that in the strip. I said she was "lost," "gone," but never dead.

Also some readers complained that I had drawn the school bus with a stop arm. No -- I had drawn it with a stop sign -- the stop arm is a six foot long contraption with a stop sign attached that helps keep traffic from passing the bus. Not at all what I drew. Again, I do know what I'm doing, folks (baby carriage excepted).

The book Dolly is reading on 12-13-16 is Guild, a excellent Western by my late friend Ed Gorman. I wanted to acknowledge his passing somehow, so worked in a plug for one of his books. If you enjoy a good mystery or Western novel, go search out something by Ed, would you? He was a hell of a writer.
Posted by Terry Beatty at 12/19/2016 10:51:00 AM 0 comments