I'll have a table at this show this coming Saturday.  Doors open at 5:00PM, not Noon as has been reported elsewhere.  I don't know a thing about the bands that are playing -- but there will be a good mix of cool stuff from dealers and KC area comics pros -- and it should be a fun show.  Aftershock hosts a twice a month rockabilly night, and I've been to plenty of those.  They do good food, too.  Come on out and buy some art and comics, have a beer and hear some bands! 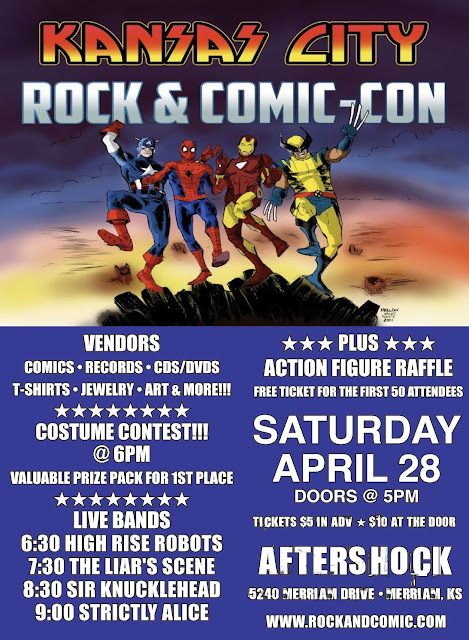 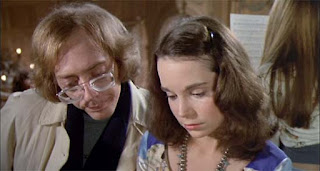 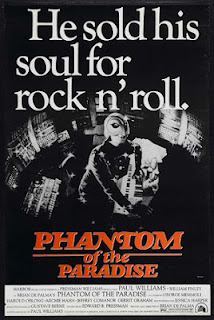 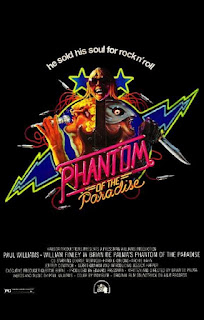 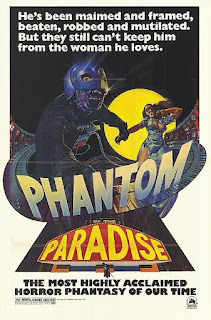 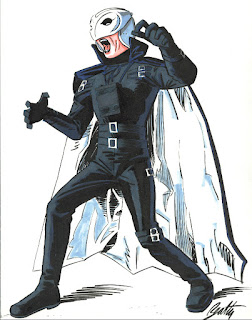 Links to this post
Email ThisBlogThis!Share to TwitterShare to FacebookShare to Pinterest
Labels: Phantom of the Paradise. Brian DePalma, William Finley

Week 3 of The Power House Gang.  I didn't keep the roughs for this one -- so the only extra I have to show is the black and white line art.  I tried a little something different with the textured gray tones in the background.  I think it added a nice mood to the piece.  Once again. I've taken advantage of the expanded layout possibilities in the new format.  Note that the first two recap panels use art from last week -- but reworked so as not to be total repeats.  A very simple color scheme this time. 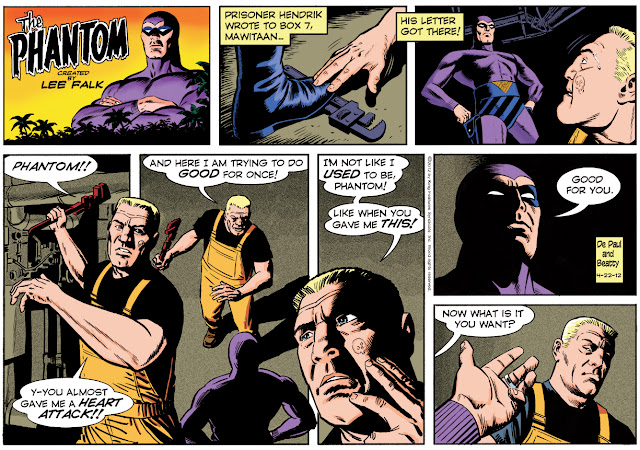 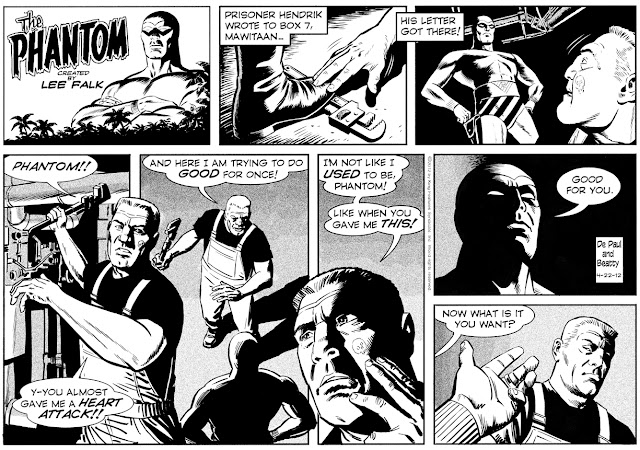 The tale of The Power House Gang continues. Here is this week's Phantom Sunday page, script by Tony DePaul -- everything else by me. Circumstances have led me to take over the coloring of the strip with this week's installment -- and I hope the readers will like my approach in this and future episodes.

Below the final print version, you'll find this week's "extras" -- two stages of the preliminary pencils -- one very rough and another close to finished. You can see I made some changes between the first rough pencil layout and the final version. I'm so glad the current format allows for these large vertical panels (when needed) -- it really lets me do a more dramatic page.

The original black and white ink art for this page will be up for auction on eBay soon. In the meantime, the previous page is still up for bid (see my previous blog post for a link).

See you in the "funny papers!" 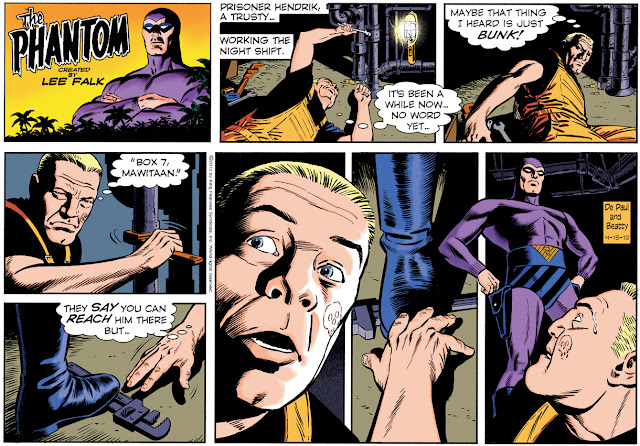 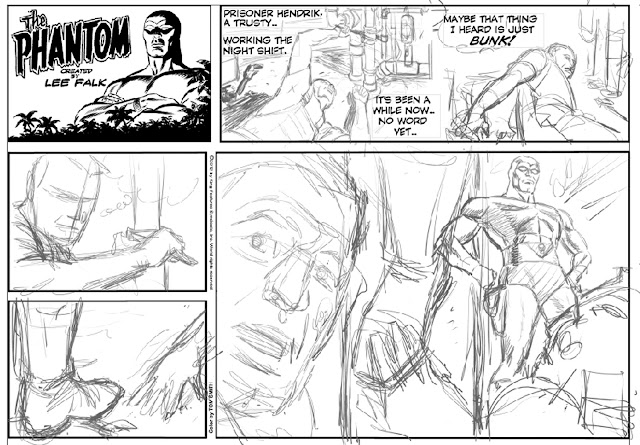 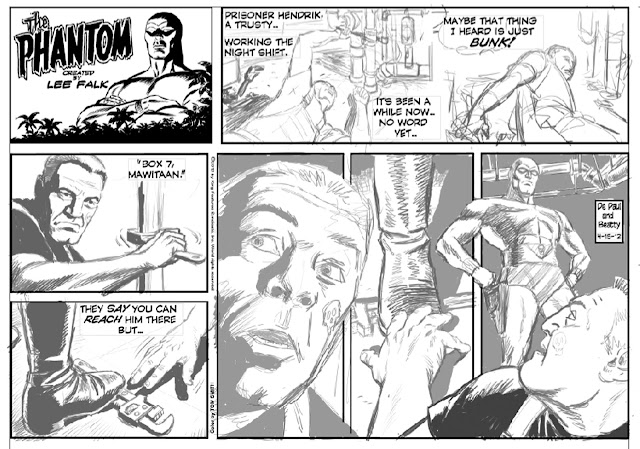 What am I bid? Where will I be?

I'm selling the original art for the latest Phantom Sunday page on eBay -- if interested CLICK HERE.  I'll be doing this regularly, so if you want to keep track of my auctions, my seller name is beattylee.
( For those who wonder about such things, the seller name goes back to when my account was shared with someone else.)

I should also note that upcoming convention appearances include SpringCon in the Twin Cities -- where I hope to see many old friends -- and my first time at the Superman Celebration in Metropolis, IL. 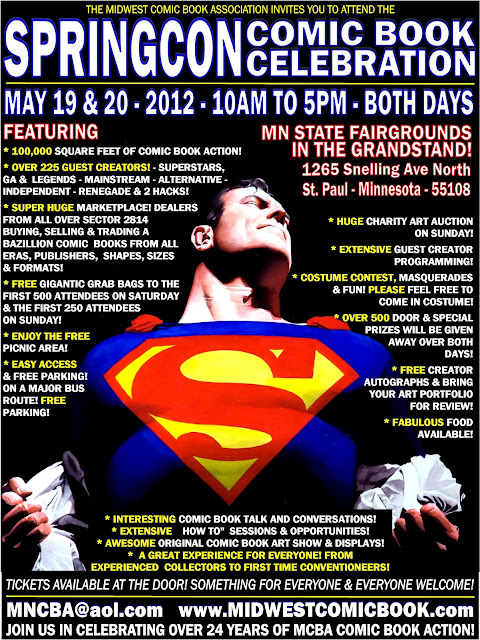 This week's Phantom marks the beginning of a new story -- and the first to be drawn exclusively by me.  The previous tale saw me stepping in after the untimely passing of Eduardo Barreto and several fill in strips by long-time Phantom daily strip artist Paul Ryan.  This Sunday also marks the last strip to be colored by Tom Smith.  Tom had colored the feature for Paul for several years, and came back to it when my art began running -- but  budgetary reasons demand that I take on the color chores as well as the rest of the art.  My thanks to Tom for helping me get off to a running start -- it was much appreciated. 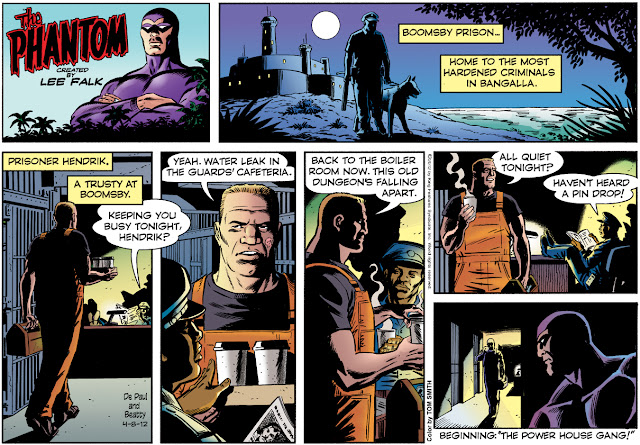 Since it's Easter, I hid an "Easter egg" in the strip.  Do you see it?

Below is my rough pencil version -- today's extra for my blog readers.  And below that, a rejected version of the last panel.  The Phantom's pose struck me as too similar to the hiding-behind-the-tree shot in my first Sunday page -- so I reworked it.

Come back next week for more!

Oh -- the original art for last week's Sunday is still up for bid on eBay for a couple days.  Please have a look. 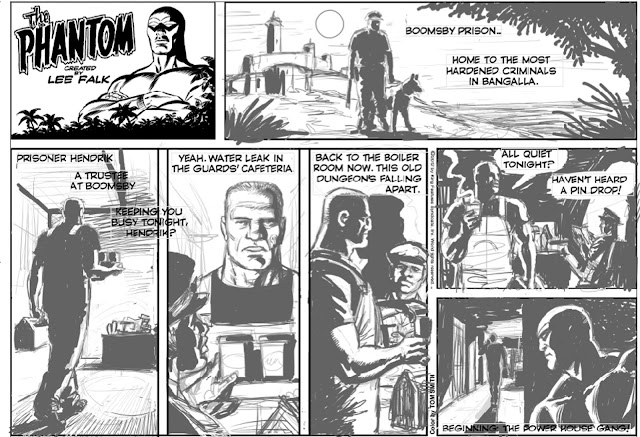 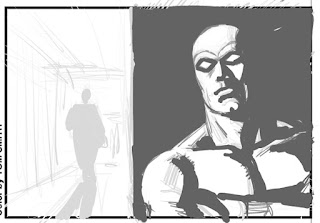 Double dose of The Phantom

I was busy attending Planet Comicon last weekend -- and forgot to post last Sunday's Phantom strip here! So here's a double dose -- last week's and today's.  As an extra, I'm including the B&W ink art prior to color, so you can see just how much colorist Tom Smith brings to the table here. 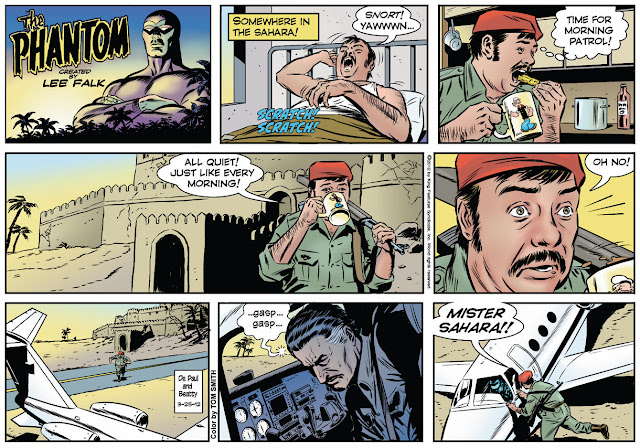 This week's strip is the final page in the "Shadows of Rune Noble" story line -- and my first chance to draw the Phantom recording his adventures in the Skull Cave -- and to draw my versions of Guran and Devil.  Seems Guran is the computer whiz and The Ghost Who Walks is a bit technologically challenged!  I really enjoyed drawing Eric Sahara/Nomad's trophy room.  I suspect we will see more of Nomad - but as for next week?  New adventure!!!

Congrats, by the way, to Tom Yeates, who takes over the art on the Prince Valiant strip with today's Sunday page.  Welcome to the King Features, crew, Tom!  And best wishes to Gary Gianni, who leaves the strip after a decade of wonderful work. 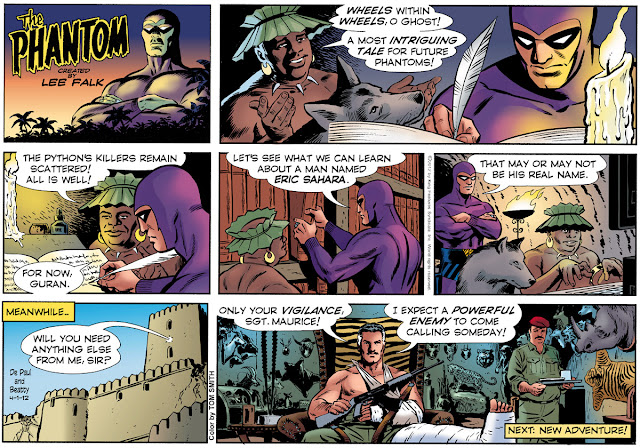 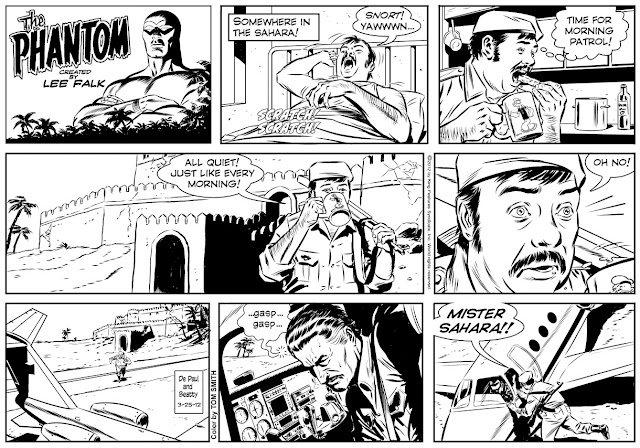 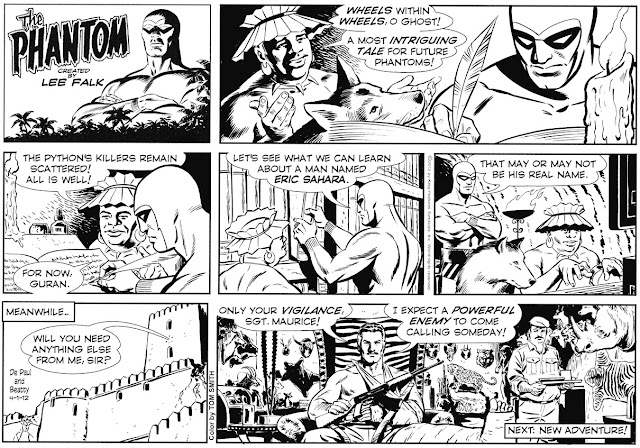