My second installment of  Rex Morgan hits the newspapers today -- and is already up at the Comics Kingdom site (18 comments by half past Midnight -- most of them snarky and insulting -- what a surprise!) Anyhow -- since it's the first week, I figured I'd continue to share the comparison of the color and gray toned versions. Again, the color isn't my work -- but the tones are.

As for the snarky comments -- I don't take them seriously -- no more so than I would a heckler at a comedy show. I just think it's sad that some folks clearly have nothing better to do than wait for new strips to be posted so they can see who can be the first to make the nastiest comment. I just think it'd be nice if people who actually liked the strips would post more....

And this isn't just about me being the new guy on the strip, so I don't take it personally. Comments have been nasty on this and most other strips for some time now. So ignore the rude comments from the Peanut Gallery and enjoy the huge archive of strips available at the site -- and please, check in and see what I'm doing on Rex and The Phantom once in a while. Okay? Thanks!

Today is the first day of what I hope will be a long run of me drawing the REX MORGAN M.D. comic strip. Shown here are two versions of my first daily. The color version comes from the Comics Kingdom website, where you can read this (and many other strips) every day for free. The color is done by someone hired by King Features, and I have little to do with it, other than offering a note or two (as in "Night scene!") A good many papers run daily strips in color now, and this is the version they'll get.

But some papers still go the traditional black and white route, so there is an alternate version with gray tones added. Later in the week, I'll show a few more of these. The tones are done digitally in Manga Studio -- and as a guy who used to cut a lot of zip-a-tone, it's a treat to be able to just use the "magic marker," and draw those areas in with a few swipes of the stylus.

I'm coloring the Sunday page myself, as I do on The Phantom -- and will share the first Sunday here as well -- but that won't be this coming Sunday, as there is still one Graham Nolan-drawn Sunday page in the mix. Beyond that, I'll likely only share a few selected strips, as the Comics Kingdom site is now free and has strips archived going back a decade. If you wish to follow the strip, and it's not in your local paper, Comics Kingdom is the place to go. I most likely will drop my regular Phantom posts as well, again, since the site has easy access to the strips now. You can pay a small fee, if you'd like, to have your favorite strips emailed to you each morning -- a service I use and like. And it's not just current strips, but many vintage ones as well. I subscribe to DeBeck's Barney Google, Crane's Buz Sawyer, Drake's Juliet Jones, as well as vintage runs of Phantom, Mandrake and Flash Gordon.

It's unfortunate that so many hecklers/trolls have found their way to the site, and fill the comments with snarky rude remarks. I'd be thrilled if some of you reading this would go post something positive -- or at least civil, regarding the strip. And vote "down" on the rude comments.

See you in the funny pages! 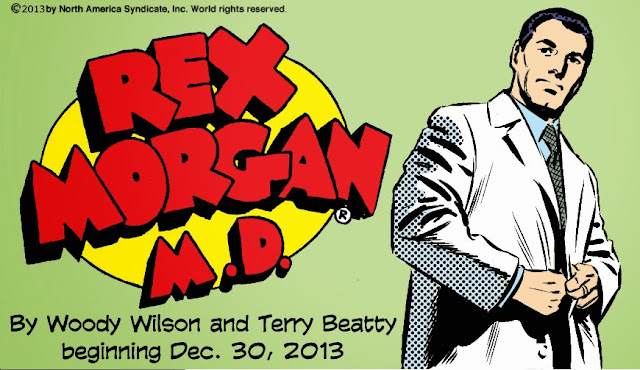 King Features asked me to hold off on announcing this news until a week from the first strip appearing, but now that we're there, I can share what I've been hinting at on my Facebook page for over a month -- as of Dec. 30, I'll be taking over the art chores on the long-running continuity strip, Rex Morgan M.D.

Graham Nolan, who began drawing the strip in 2000, has decided to move on, and King Features offered me the gig. I accepted, making me the second artist to concurrently draw The Phantom Sunday strip and the daily/Sunday Rex Morgan feature (Graham being the first, of course).

The strip began in 1948, written by Nick Dallis and drawn by the team of Marvin Bradley (figures) and Frank Edgington (backgrounds). When Dallis retired in 1990, Woody Wilson took over the writing and continues scripting the strip today. Other artists who have drawn Rex include Frank Springer, Fred DaSilva, Tony DiPreta and (uncredited) Fran Matera, Alex Kotzky and Andre Le Blanc.  That's quite a line-up, and I'm pleased to be included in such heady company.

This may come as a surprise to fans of my comic books, who'd expect me to be doing something more along the lines of previous work -- crime, detective, super-hero, horror, etc.  And while I certainly love working in those genres, I'm enjoying spending a good chunk of my work week drawing ordinary people in ordinary situations -- concentrating on the character "acting," and making the drawing seem realistic and natural. And of course, I'm continuing to draw the Sunday Phantom strips, so I get a good share of masked hero adventure, still. This now makes me a full-time newspaper strip cartoonist -- something I've wanted since I was a kid, reading the "funnies" every day -- one of those being Rex, which ran in my hometown paper.

I'm actually creating two versions of the daily strips. One strictly in line, for the web, and papers that print them in color (King is coloring the daily strips while I color the Sunday) -- but I'm also doing a gray toned version for papers that are sticking to the traditional black and white dailies. I'll share some of those toned strips here, once they run in the papers. Original art collectors will be sorry to hear I'm doing the strip entirely digitally (in Manga Studio) -- so there will be no physical originals for my Rex strips. It's the only way I can keep up with the schedule -- and I suspect there would not be as much of a market for Rex Morgan original art, as there is for my Phantom pages -- which I will continue to create with actual ink on actual paper! Manga Studio makes adding the gray tones incredibly easy -- no more cutting "Zip" -- a real pain to do by hand.

As a seven days a week feature, I won't be showing them all here -- but you can follow the Rex Morgan strip at the new Comics Kingdom website -- which is now ad supported and free for readers to browse. You can read The Phantom there as well, and it's possible I may stop showing all those strips here as well, since they will be regularly available at Comics Kingdom -- and you can even search back through strips as far as a decade ago. My first Rex daily will appear Dec. 30 (my wife's birthday) -- with my first Sunday on Jan. 12 (the day after my birthday!).

I'l have more to say about Rex Morgan later -- but for now, I need to get to work drawing the strip! See you in the funny pages!

A Holiday Message from The Phantom 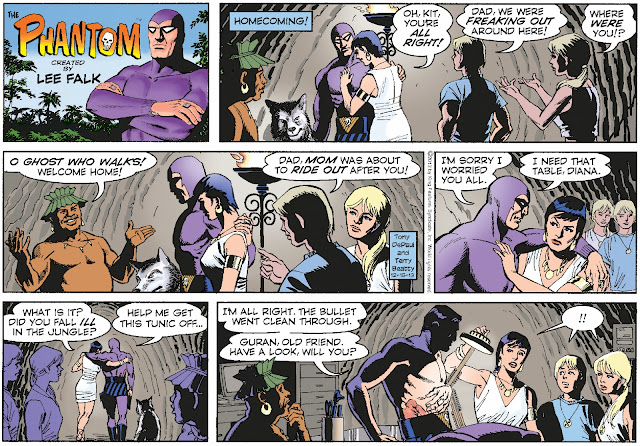 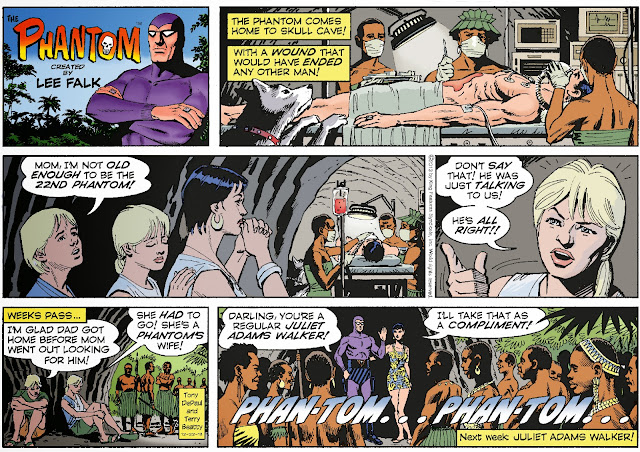 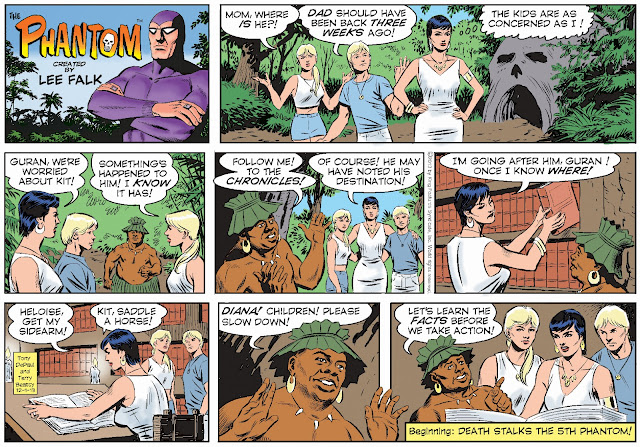 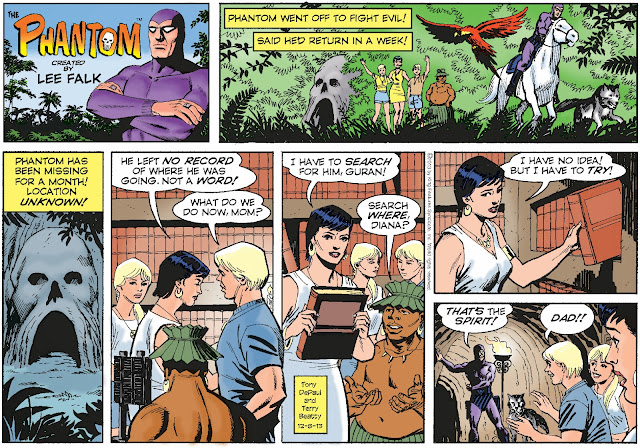