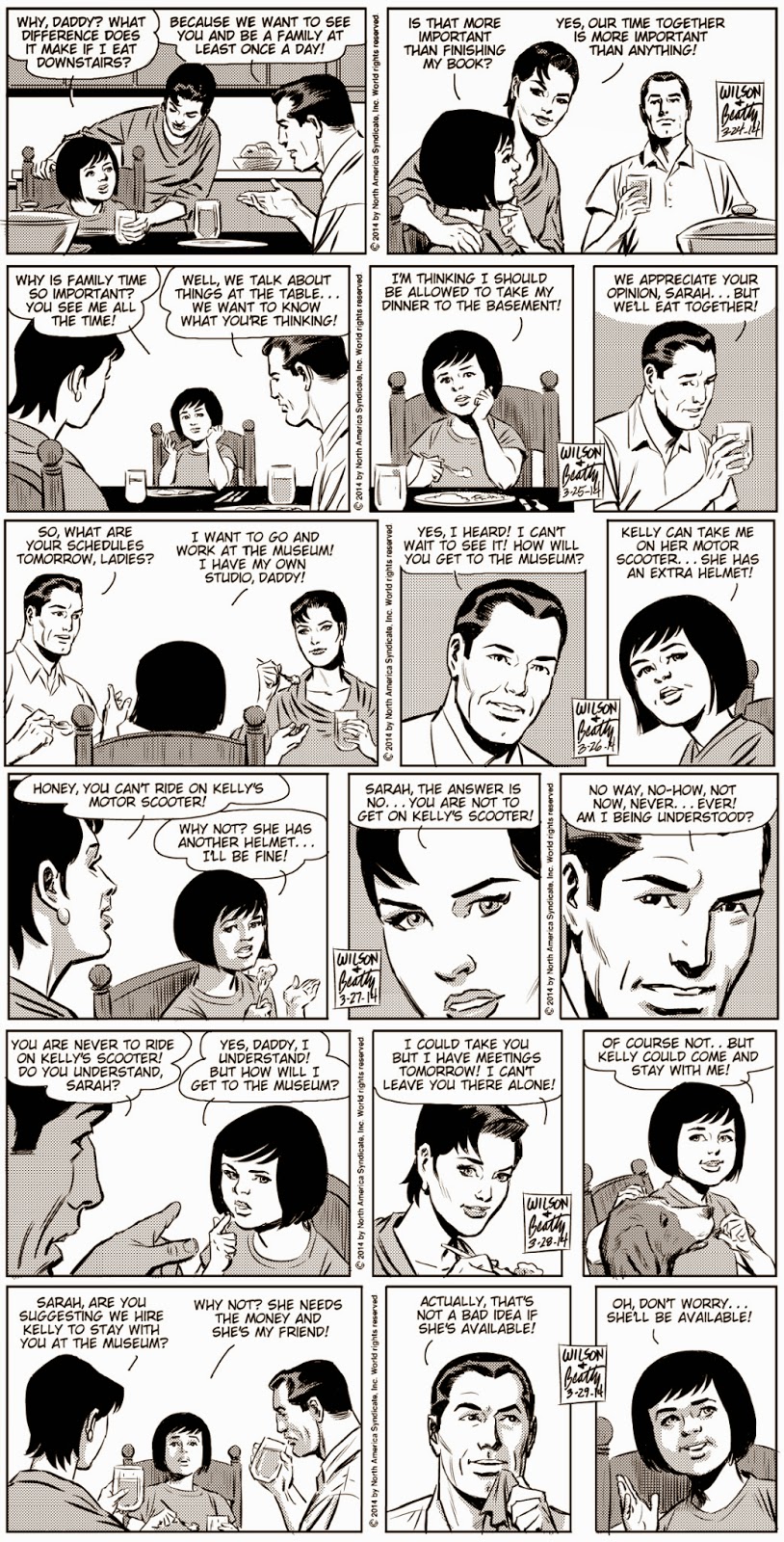 Here's the latest week of Rex strips. I'm currently working through the weekend so I can take Monday off to drive to Minnesota to spend Tuesday (her birthday) with my daughter Elizabeth -- then stick around for a few days to see family and friends. I'll be digitally drawing Rex and The Phantom while I'm there, of course. No time for any other commentary -- The Ghost Who Walks must be drawn!

Sunday, Snowy Sunday with the Phantom and Rex Morgan

I'm getting ready for the last day of Planet Comicon and am not thrilled with the weather. We had two lovely days prior to this -- and now it's cold and snowy again. Of course, the show is inside, and it'll be perfectly fine in the convention center -- but with the demands of parking for a show such as this, it'll be a long cold walk, from whatever parking garage I choose, to the loading dock where the guests/exhibitors roll into the show. With William Shatner joining the Star Trek guests at the show today, I expect attendance will be just crazy. I doubt that'll translate into business for us comic book/strip folks -- but it will mean a tougher fight for available parking on this blustery cold day!

So -- all that aside -- here are today's Sunday strips -- with a whole bunch of preliminary extras for The Phantom. 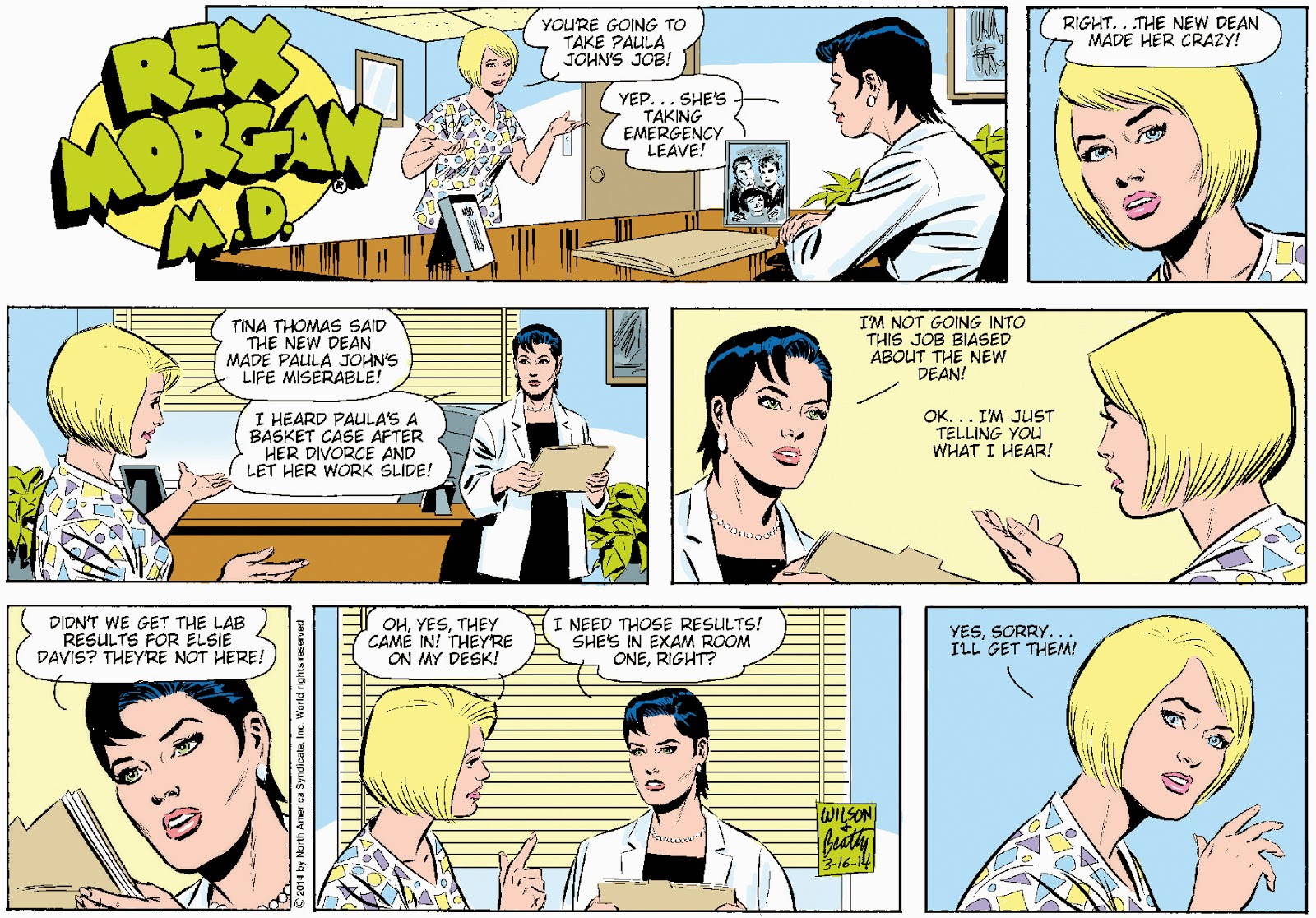 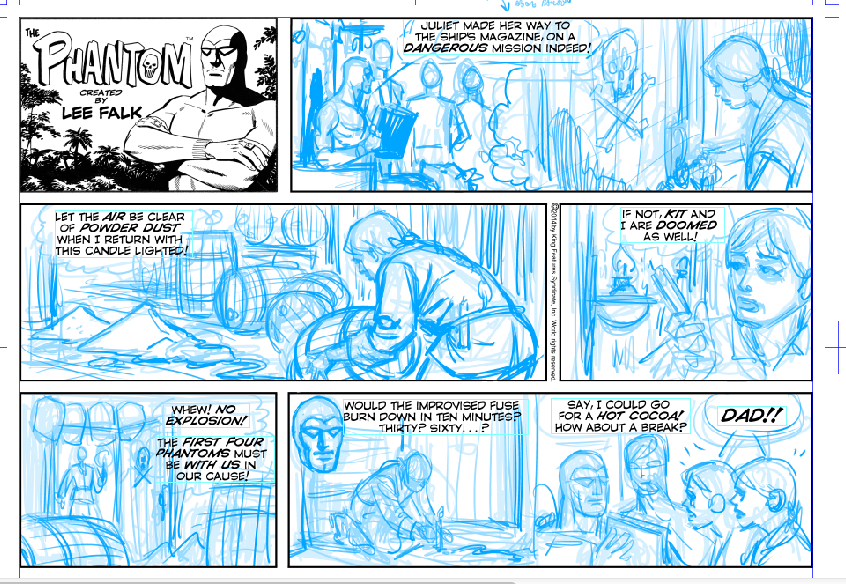 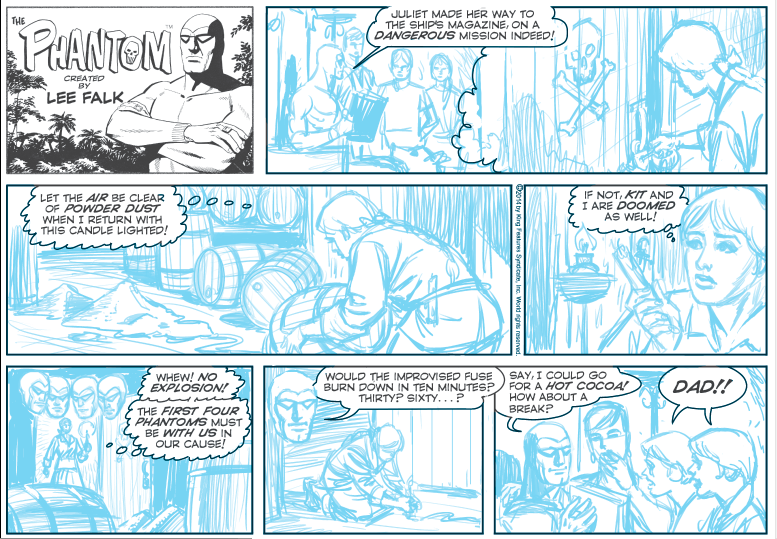 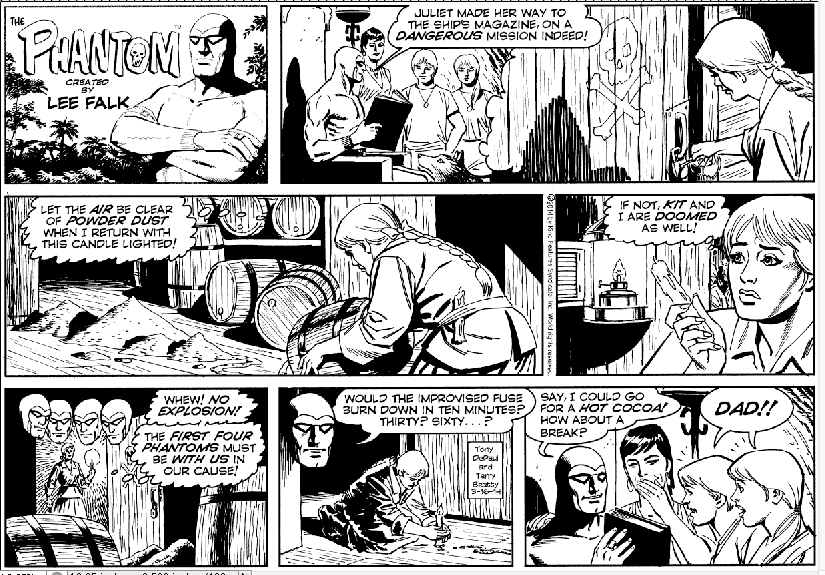 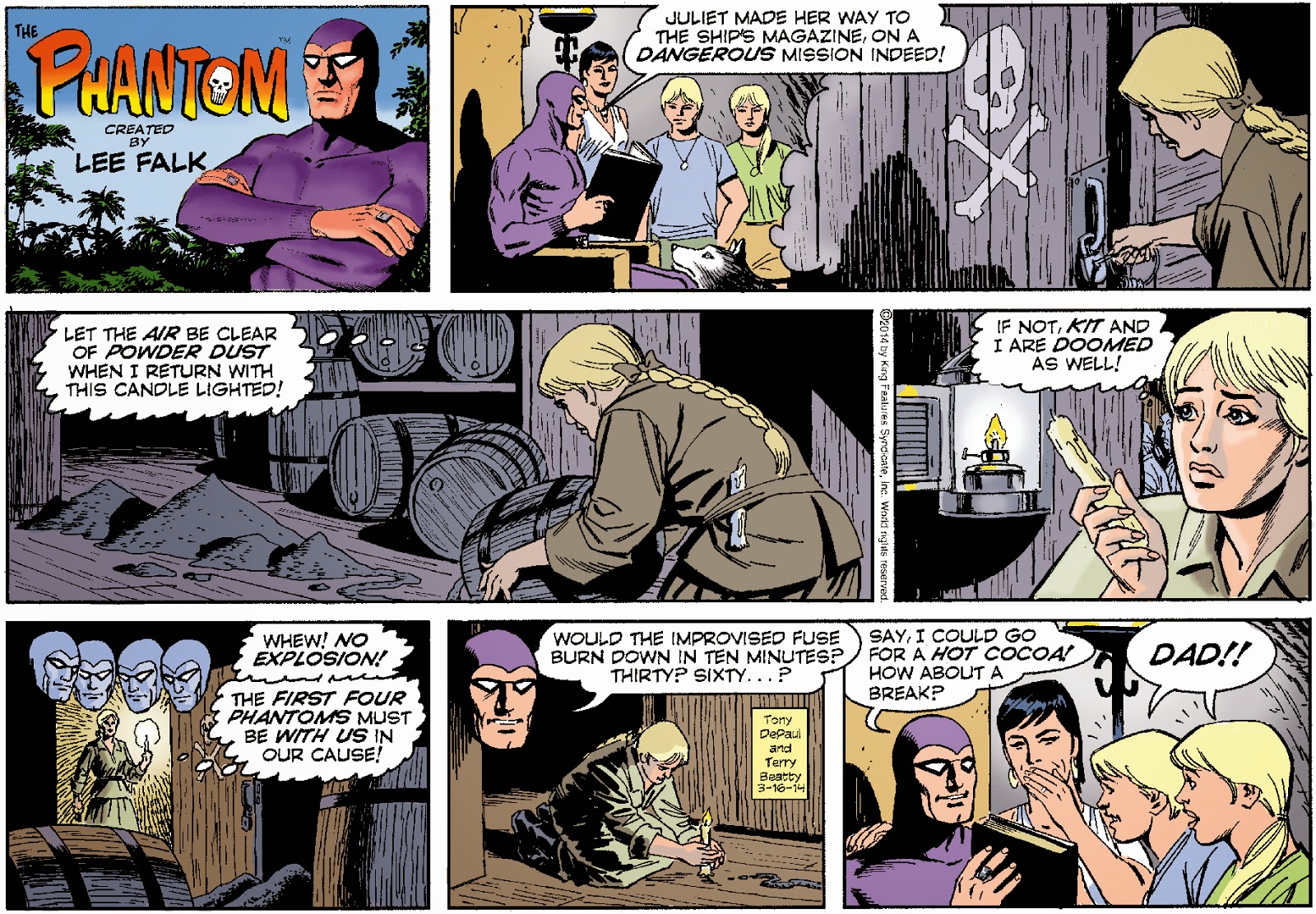 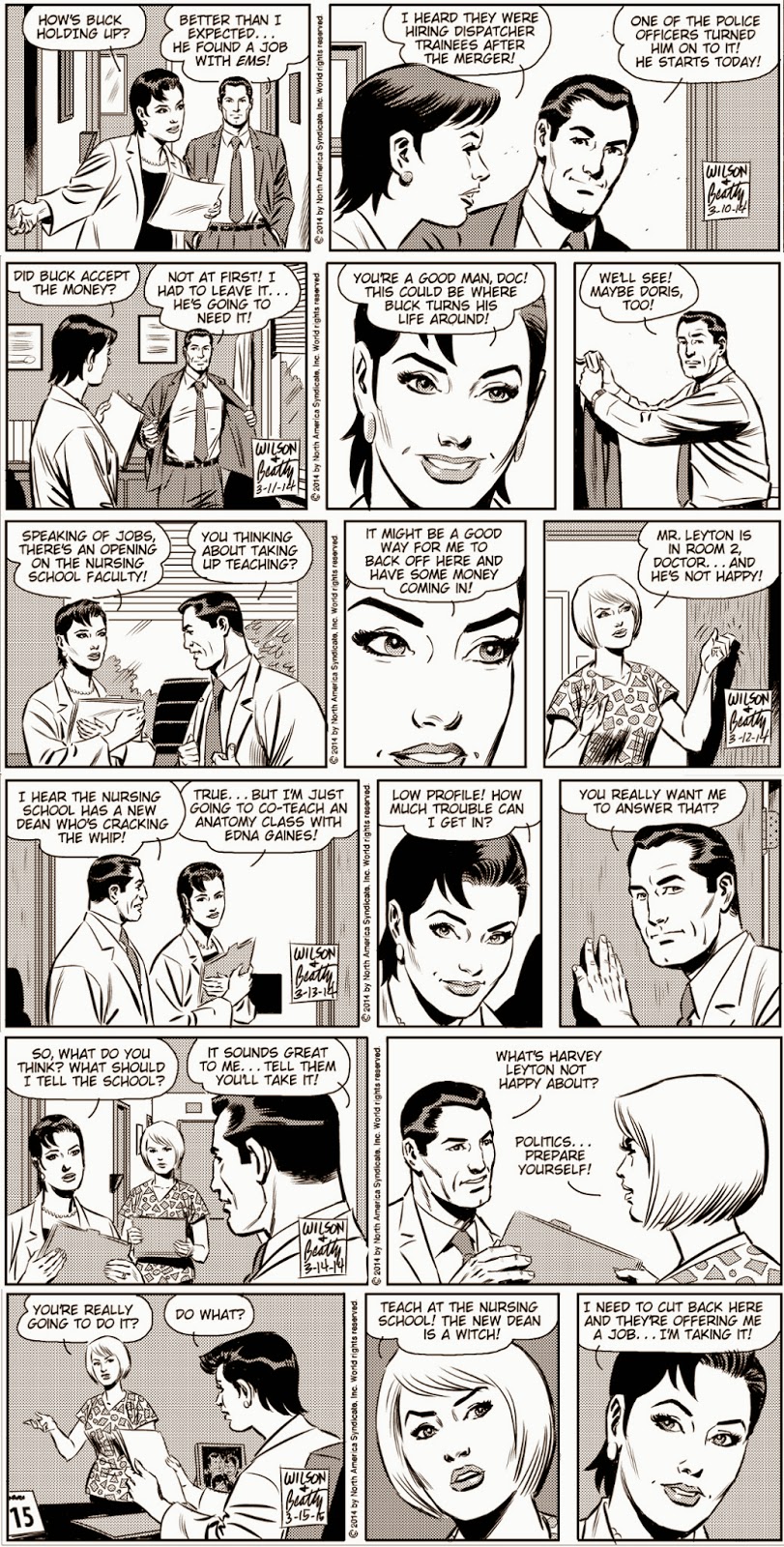 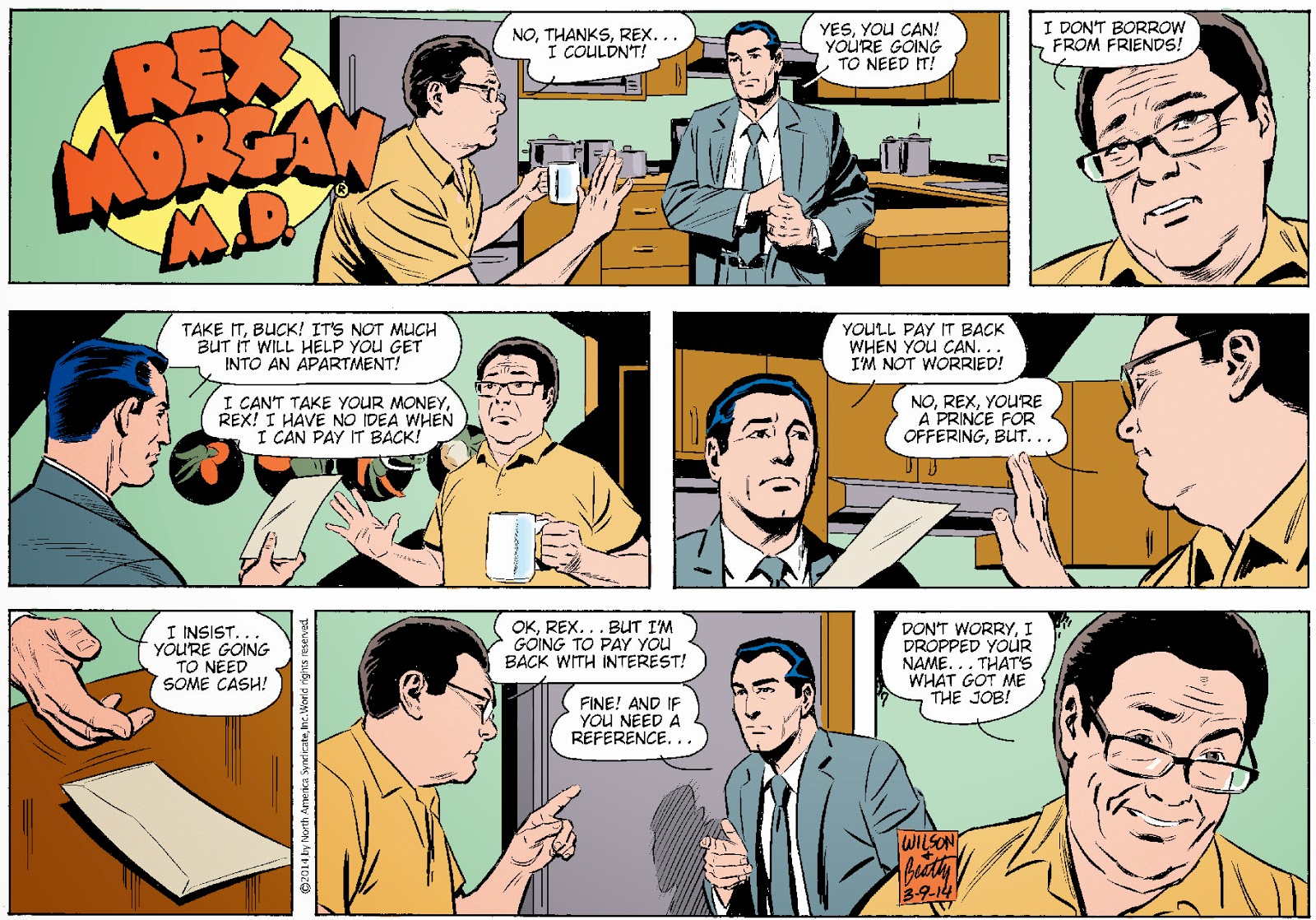 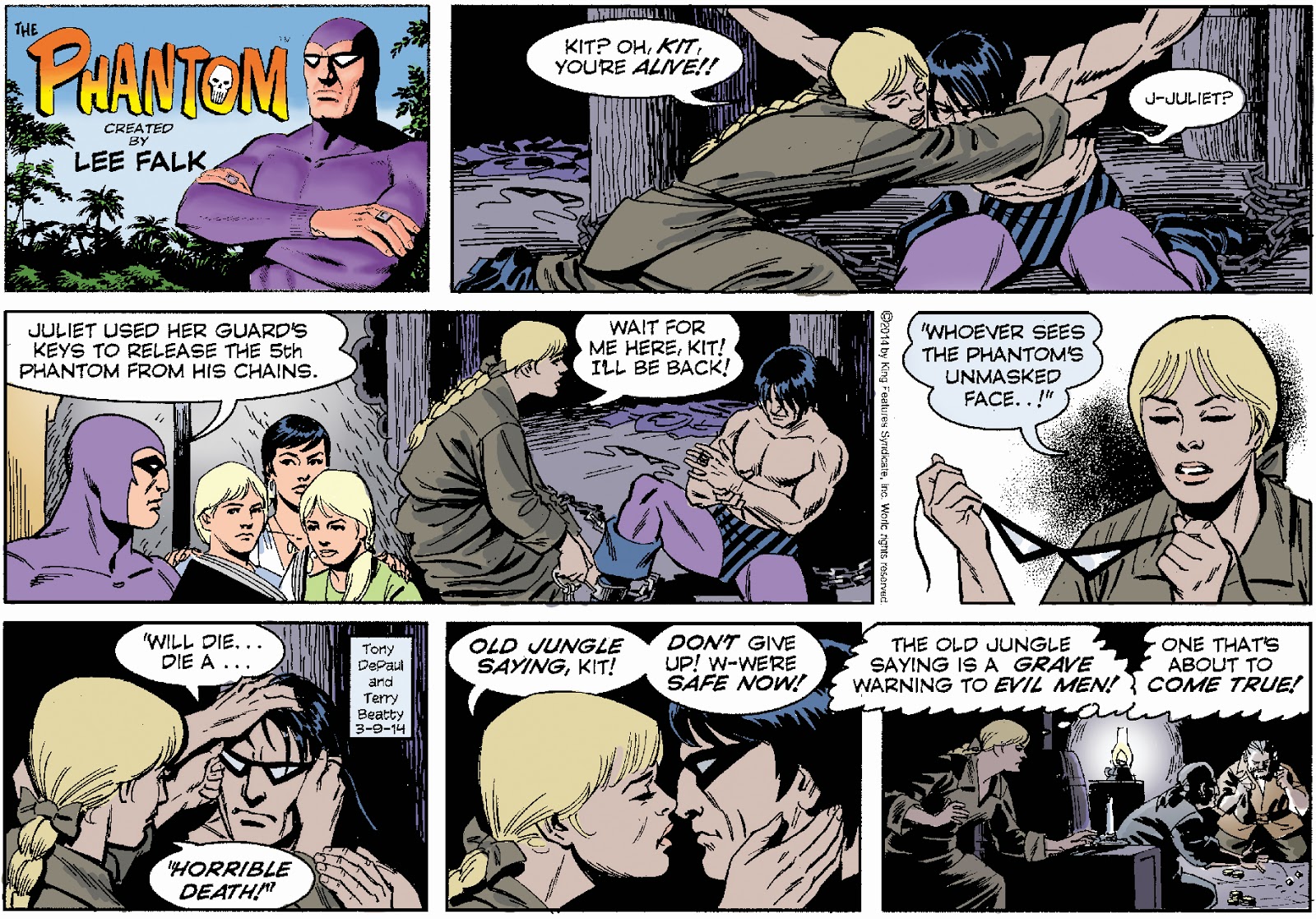 And a few Phantom extras today -- the blue line "pencils" I print out to ink (image is cut off a bit at the bottom -- sorry), the final B&W art -- and just for the heck of it, the color plate. 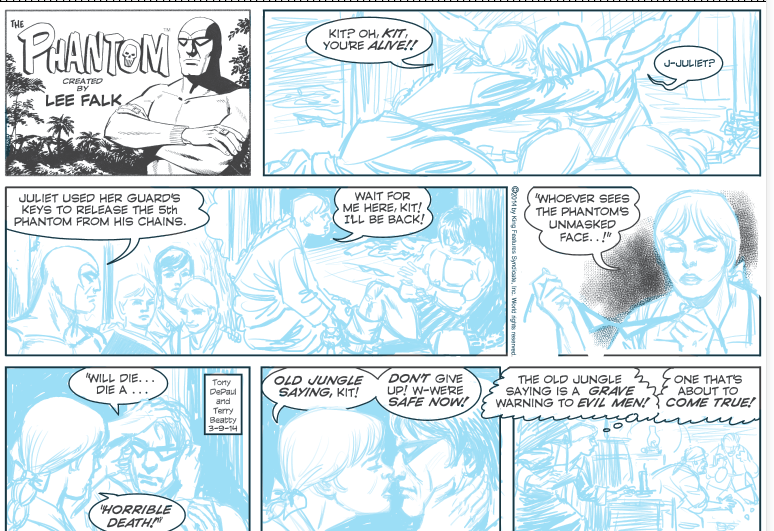 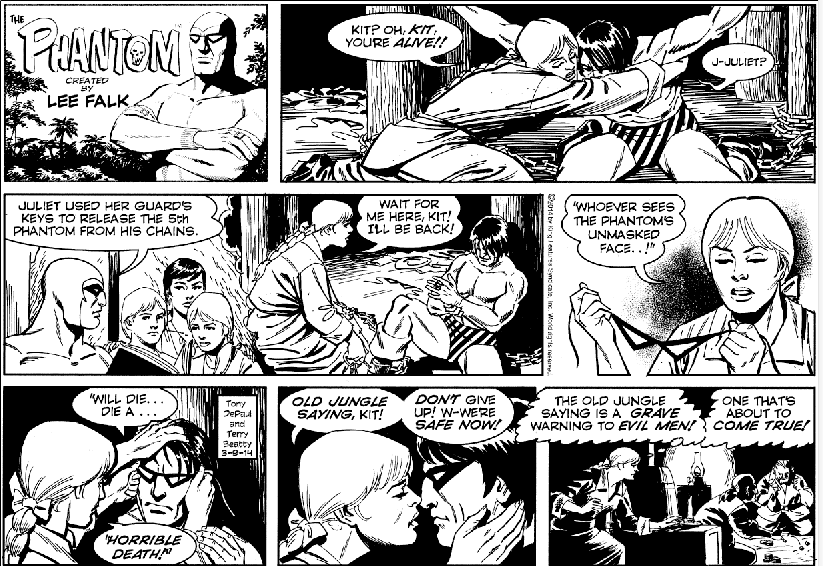 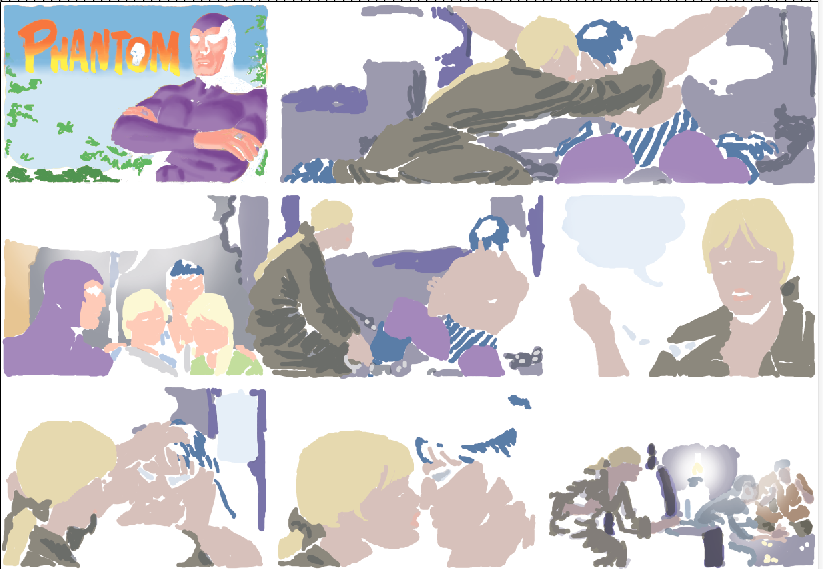 Here are the latest B&W strips. I've switched to a tighter dot pattern -- and am now using a lighter and a darker tone for variety's sake. 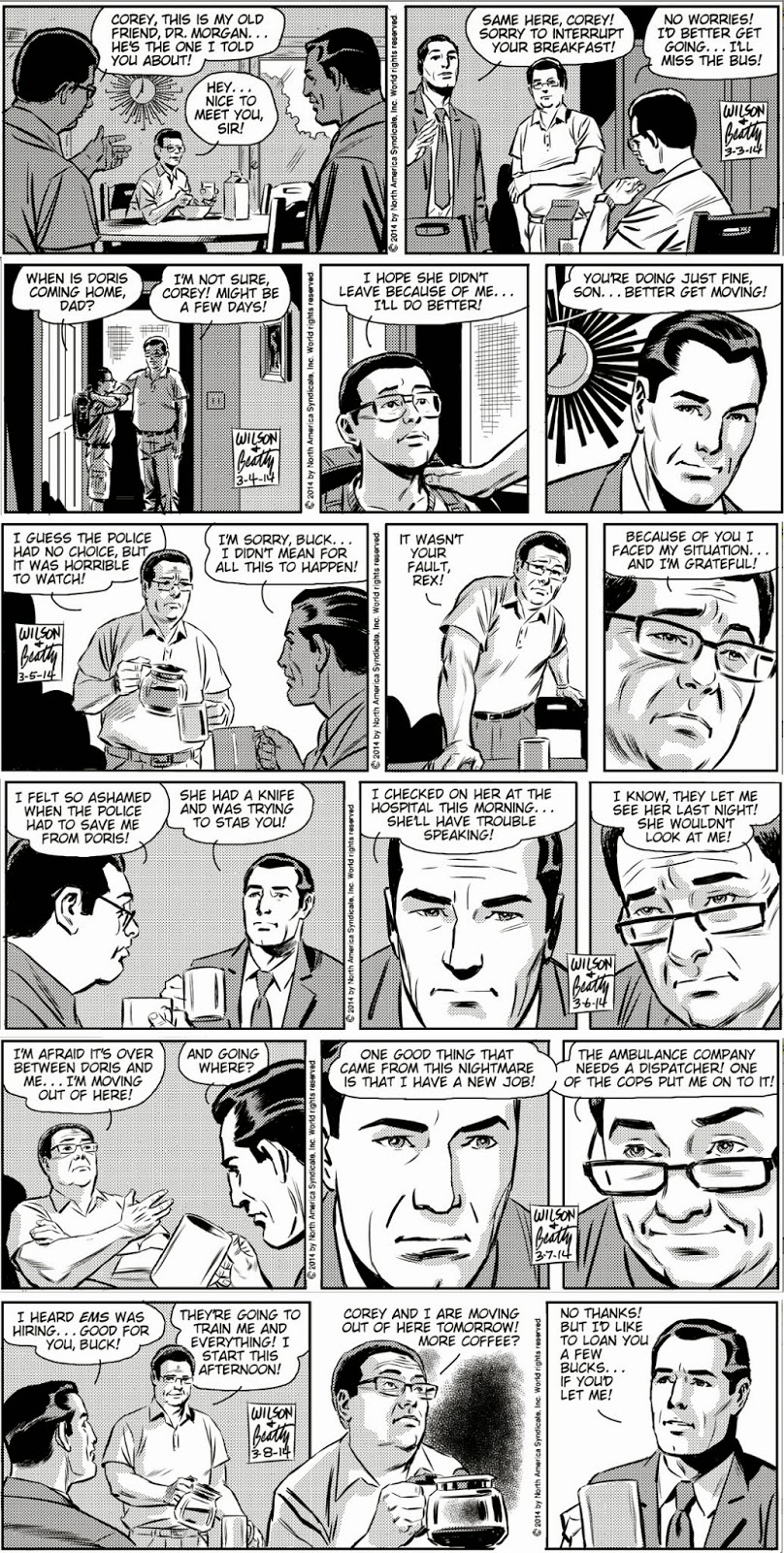 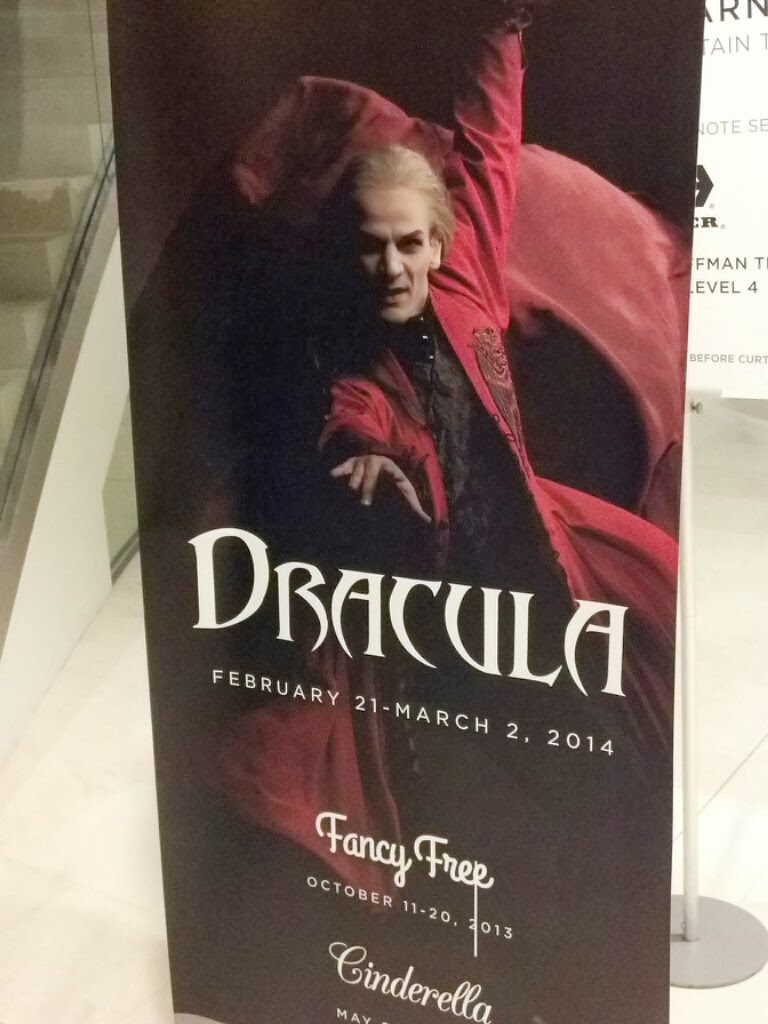 My wife, Erika, spent much of her childhood taking ballet lessons, and though she packed away her pointe shoes some time ago, she still loves the ballet. It is not, however, one of my passions -- and yet there is this (see picture above).

Dracula has long been one of my favorite films (the Tod Browning/Bela Lugosi version, of course) and one of my favorite stories. There's a picture somewhere of a 10 year old me at my brother Jan's college graduation, holding a book I'd brought along to read during the long ceremony -- Bram Stoker's Dracula. It was on loan from our home town library -- and being from the "adult" section, I recall having to get my parents' permission before our stereotypically uptight librarian would allow me to check it out!

So, on this rare occasion, when my wife's interests converged with mine, there wasn't much question that we had to take in the Kansas City Ballet's production of Stoker's classic vampire story. I can hear the monster/horror fans out there groaning --- "Ballet? Dracula? Really? Are you kidding?" Well, yes, yes, yes and no.

This was no light and fluffy thing -- but a beautifully produced, moody, faithful adaptation, that was at times genuinely disturbing and creepy. Anthony Krutzkamp's Count Dracula was powerful, commanding and malevolent -- a physically imposing character who treated the other characters/dancers like puppets on a string.

The look of the production was equal parts Murnau (Nosferatu 1922) and Coppola (Bram Stoker's Dracula 1992), with the Count often wearing a long flowing red coat reminiscent of the costuming in both films. The set design, lighting, etc. were all superb, and on a par with the slickest productions I've seen. Scenery and costumes were on loan from the Atlanta Ballet -- so this would have looked familiar to anyone who saw their production. Anyone thinking this would be somehow a low rent show because it's Kansas City (not NY or LA, y'know!) would be proven quite wrong.

This production has been around since 1996, though I'd not known about until it came to KC. That's what I get for not paying attention to the world of ballet, I suppose. Phillip Feeny's score was wonderful (played by the KC symphony). I had no frame of reference to judge the quality of the dancing (choreography by Michael Pink) -- but my wife assures me that it was excellent.

The story adhered quite closely to Stoker's novel -- one of the more faithful adaptations I've seen -- and had moments that were as nightmarish as any film adaptation. Dracula slicing open his chest with his fingernail for Mina to drink his blood -- luring his brides away from Harker by offering them a sack full of baby -- chilling stuff. Any horror fan going in with a reluctant "Dracula -- in tights?" (there were no tights -- full costumes for all) attitude would have been turned around quite quickly by this dreamlike presentation of one of "our" stories. The lack of any real spoken dialogue (Mina and Jonathan's names are shouted briefly -- but that's it), making the story dependent on the music and visuals (sets, dance, special effects) made it closer in tone to watching a silent film with a good score than seeing a traditional play or a modern film. Again, Murnau's version of the tale often came to mind.

I did think the second act lagged a little (first scene goes on a bit too long) -- and Renfield didn't quite have enough purpose -- but that's kind of true in the novel as well. Minor quibbles, though. All in all, I thought it was an amazing show - and this non-ballet fan would highly recommend it to anyone who loves the Dracula story. Unfortunately, today is the last day for the KC production, and I don't know if any tickets are still available -- so I can only suggest you watch for any local productions that might crop up in the future. If they are as good as this one was, you won't regret attending.

Here's  a promotional video for the show -- different dancers than we saw -- but it will give you a good idea of the look and tone of the production.

Rex and Phantom Sundays and a Phantom extra

Another double dose of Sunday strips -- Rex Morgan and The Phantom for March 2, 2014. As an extra, you get a screen shot of my almost-finished digital "pencils" for The Phantom. I enjoyed drawing the grizzly old pirates and the big punch in panel five.

As for this week's Rex Sunday, drawing hands holding chopsticks is a bit of a challenge…. 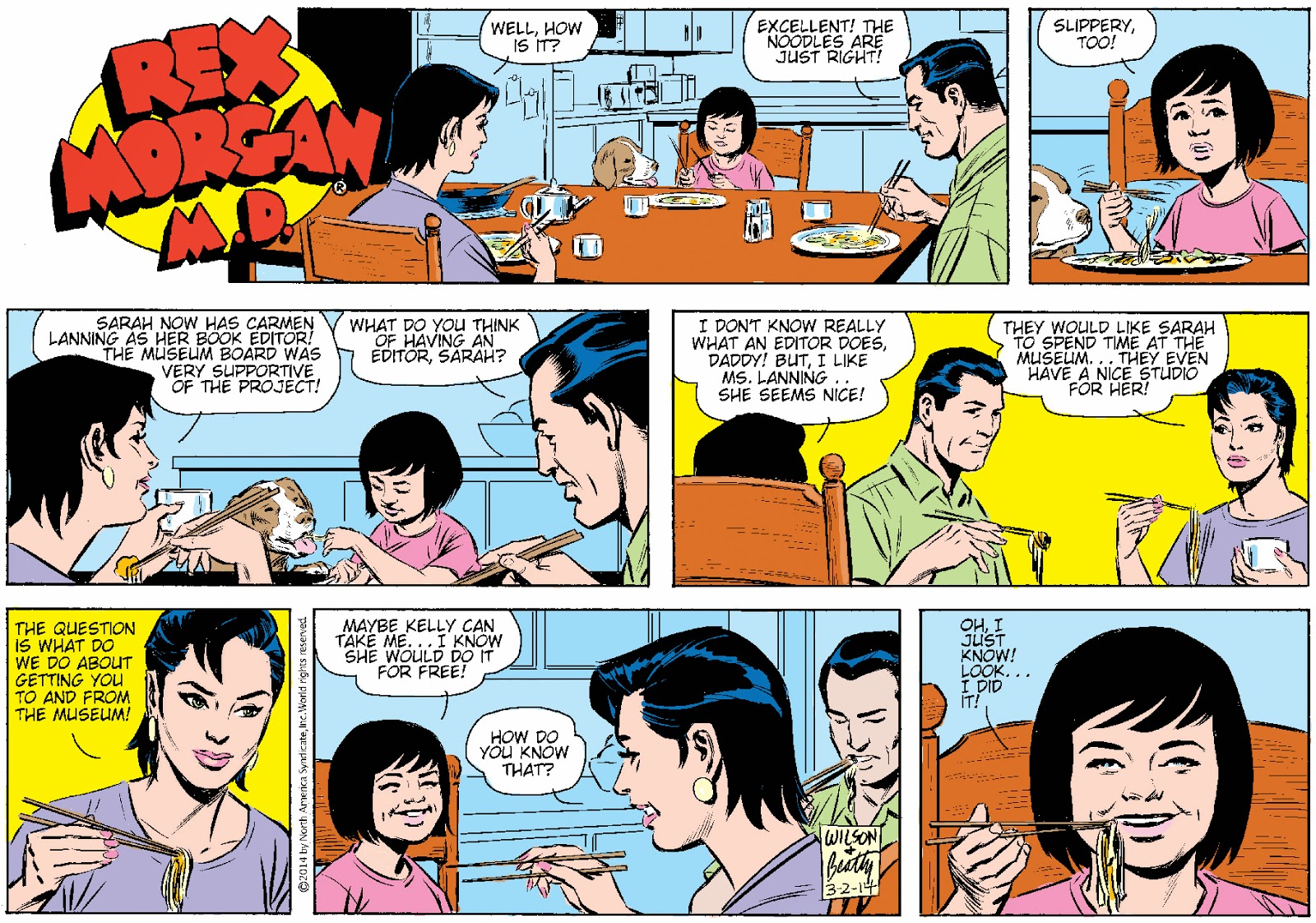 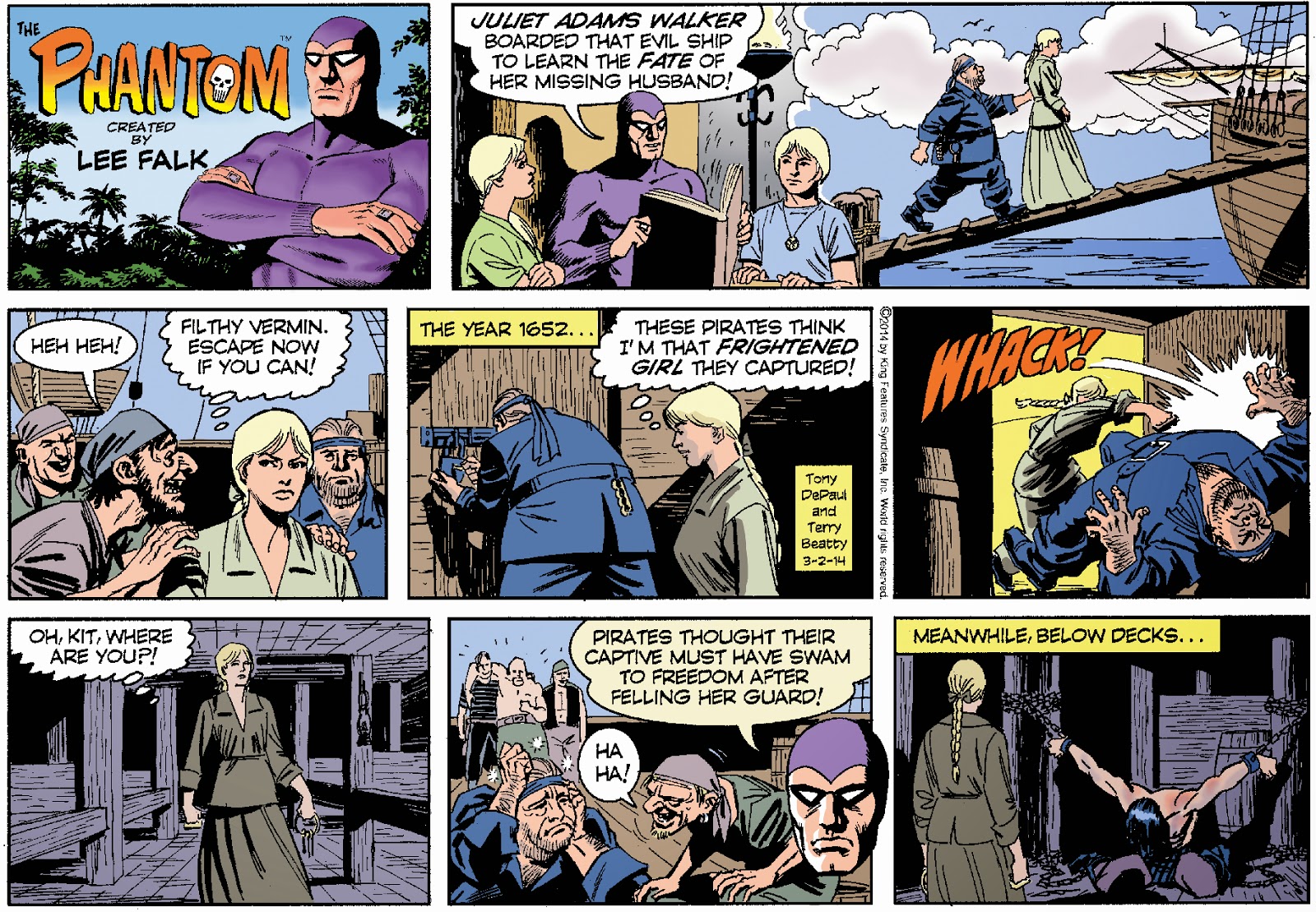 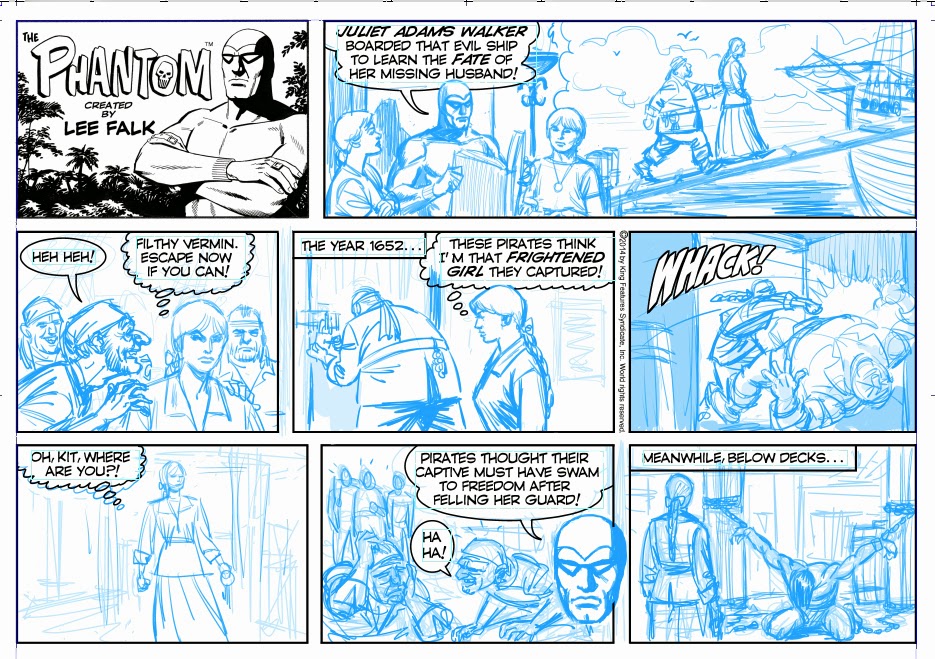 It's Saturday -- so it must be time to post this week's Rex Morgan dailies. Doris finally gets hers -- off panel -- and this has created a certain amount of discussion, including on Tony's Isabella's "Bloggy Thing."

A few notes regarding questions and comments that have come my way.  Yes, that is a real taser gun. What looks like a target symbol or registration mark are two panels that pop open/off when the taser wires are fired. Speaking of which, those are the taser wires on the floor in Wednesday's first panel, not a puddle of something (really, people!) And yes, that's June's hand on Rex's face (seen from her POV) in the last panel of Saturday's strip -- Rex's hand would hardly be that dainty, nor his nails that long. Sigh….

The decision to skip showing the moment of taser impact came from the strip's writer, Woody Wilson, not me. I've not asked him why, but knowing the sort of complaints papers get when violence  is shown on the "funny pages," I suspect he was just trying to avoid that headache. Though Tony DePaul and I seem to get away with quite a lot in The Phantom these days, so perhaps attitudes are changing, but then Phantom has always been an adventure strip, and Rex is soap opera, so context comes into play here. Frankly, I think the most shocking thing here comes in Rex's dialogue in panel one of Friday's strip.

One eagle-eyed reader noticed the lettering seemed larger this week -- and it is. I goofed and used "Comicrazy" the font I letter The Phantom, and most of my other comics work with, rather than the usual "Wild Words," which Graham Nolan had been using on Rex before I took over. So if hardly anyone noticed, does it matter…?

That's all for now. See ya in the funny papers!