Here we have some of the pieces hanging on the wall in the studio -- starting with Mitch O'Connell's portrait of Ms. Tree, drawn for the 50th issue of the comic. I really should have this in a better frame -- but there it is. It shares a wall with a George Petty cowgirl pin-up -- a framed print (original Petty art is beyond my budget, sorry to say). 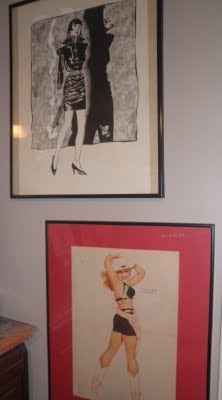 I grew up watching all sorts of Westerns on TV -- and that childhood interest has hung on through adulthood. Here are six arcade cards of cowboy stars, popped into a nifty frame found at a large chain craft/hobby store. Richard Boone as Paladin in Have Gun Will Travel, James Garner and Jack Kelly as the brothers Maverick and Dale Robertson as Jim Hardie in Tales of Wells Fargo are my favorites here. 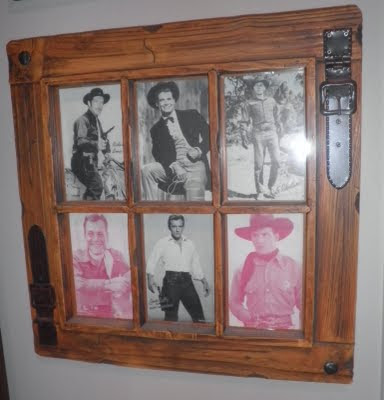 This Gil Elvgren pin-up calendar is not only lovely -- but is from the year I was born -- my January birthdate on display. The Aurora Captain America Comics Scenes model kit is represented by the cut box art front only -- art by John Romita, Sr. Gil Kane art is featured on the Lone Ranger kit -- which is a complete, sealed boxed version. A boxed Shmoo from Al Capp's Li'l Abner sits in front of a stack of Leave it to Beaver books atop a pair of Batman and Superman boxed book/figure sets. A tin lithographed Comic Book Corral (with unauthorized/look-alike Roy Rogers and Trigger image) holds a bunch of vintage comics. My childhood Barrel of Monkeys sits in front. An early Lone Ranger printing set (in plastic sleeve) is reflecting a little too much light to be seen well -- I'll have to post another shot of that sometime. A few other odds and ends just happened to have landed on the shelf, including a few recent comics, a vintage digest Carnival magazine and an Iron Man mask that I couldn't resist at a clearance price at the nearby Target! 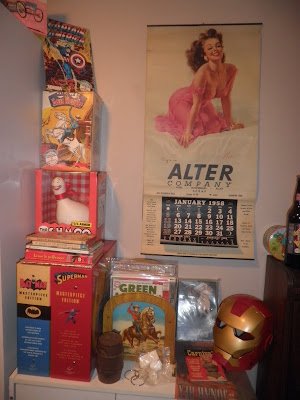 Here are the comics and magazines taking up residence in the Comic Book Corral at the moment. These will get filed away at some point and others will take their place, as it's pretty much the place where I keep whatever comics I've been looking at lately. Fanboy is a xeroxed fanzine spoof by underground artists Jay Lynch, Denis Kitchen and more -- it's the rarity here. 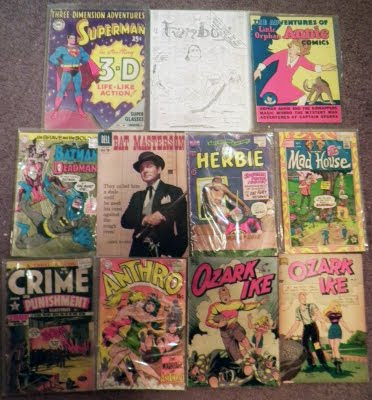 This issue of Green Lantern contains the Gil Kane at the drawing board panel that opened my young eyes to the fact that people drew these things -- I credit it with triggering the youthful decision to be one of those people when I grew up. And apparently I own two copies of Spectacular Spider-Man #2! I didn't even realize that until shooting these pics for the blog! The Rustlers is a beautifully drawn Western by Wm. Overgaard -- the Spider-Man Annual #1 is one of my all-time favorites -- and the only major early Marvel title I still own from a huge childhood find (which I'll discuss here sometime) -- and the Teenie Weenies is a stone cold mint Dell file copy. 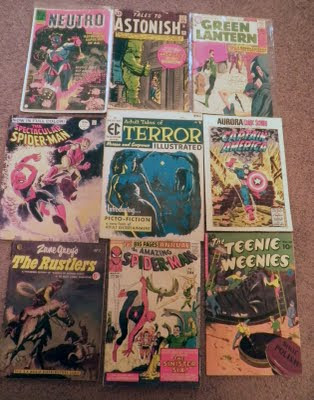 Back to the wall with an original pencil drawing of the Thing in cowboy mode by Joe Sinnott. I asked Joe to throw a "to Terry" on there somewhere -- and he ended up signing it twice. I'm amazed at how Joe's pencil line is as sharp and clean as his ink line! 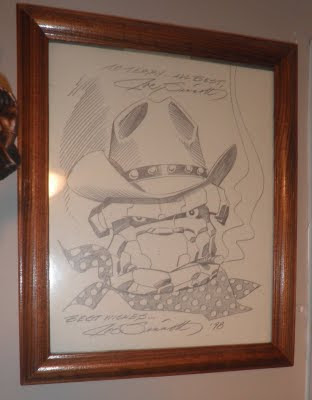 I have no idea who this lovely cowgirl is -- but I love the image. The horse looks a whole lot like Trigger.... 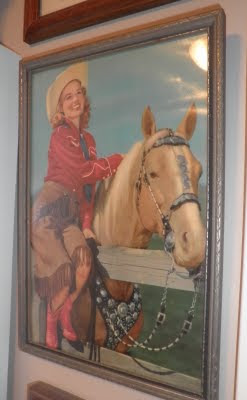 A '60s vintage Wyatt Earp print by the great Jack Davis. This is from a set of Cowboy and Indians prints offered for sale by mail order back then -- an antique shop find. 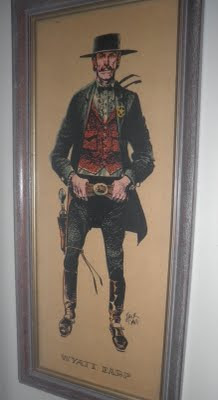 Another antique shop purchase is this set of vintage RoyRogers and Dale Evans paint-by-number portraits -- nicely done and in their original frames. I saw them in an antique shop on the way to St. Louis for a kit collectors' show a few years back -- I resisted them at first -- but stopped again on the drive home and picked them up.

This signed photo of Al Capp was an eBay buy. Listed as a printed signature, I had a feeling about it and bid anyway. Turned out to be an actual inked signature! Sometime you've got to trust those feelings. I figure Al would be happy to share wall space with the lovely Pontani Sisters. This trio has done many tours with surf guitar band Los Straitjackets -- and headlined burlesque tours of their own.