More books this time -- though the top of this bookcase is loaded with figure kits and other figural items. From left to right, here's what's what.
The small figure of Julius Caesar is a piece I found in an antique shop as a kid, while accompanying my parents on one of their many weekend antiquing jaunts. Had to have it -- and they were good enough to get it for me.
Behind him is a vinyl figure of Ray Harryhausen's Talos from Jason and the Argonauts. The small ape in the foreground was a gift from my UMA (Universal Monster Army) pal, Packy. The seated devil with sleeping apprentice is a resin "garage kit." The alabaster copy of Venus DeMilo was something that was in the house when I was growing up. At some point it became mine.
My Trick or Treat Devil Girl (a resin kit I sculpted and produced) is flanked by garage kits of Gil Elvgren pin-ups. The girl in the barrel is a Steve Kiwus sculpt, while the Aiming to Please cowgirl is by Tim Bruckner, and is a particular favorite. 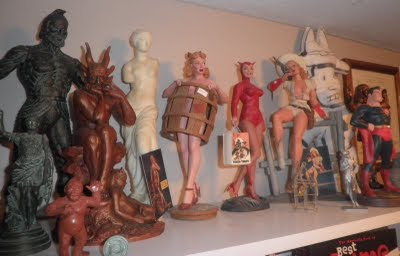 In front of the cowgirl is a little glass birdcage Christmas ornament that belonged to my mother -- and was a family piece from her childhood. The little metal sexy private eye is a Phoenix Phollies model kit from the UK. Superman is a Chris Ware-designed piece that was part of a boxed set of figure, book and comic book reprint -- I think it's just superb. The puffy B&W fellow in the hat is a doll of Doug Allen's character Steven. In front of him is a resin casting of my sculpture of '50s kids' TV star Mary Hartline (of Super Circus fame). A copy of my Johnny Eck sculpt, primed but not painted yet, sits in front of her -- leaning against him is the original wax sculpture of Miss Hartline's head. 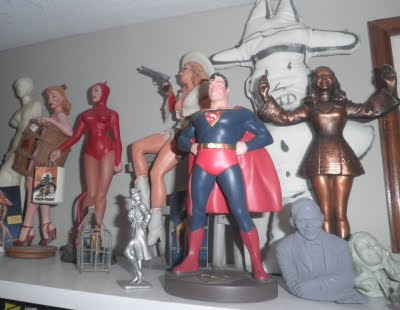 Here we have the first of several shelves in my studio packed with books by my friend and collaborator, Max Allan Collins. My sculpt of pin-up model Bernie Dexter as "Switchblade Siren" seems quite at home here. One of these days I'm going to produce a limited edition run of this figure -- it just hasn't happened yet. The Mammoth Book of Best Crime Comics reprints a Ms. Tree story by Max and me. 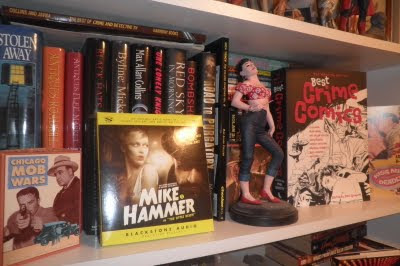 More books placed on the shelf in no particular order -- though I do have all the Hastings House/Nostalgia Press Prince Valiant books all together. The black book resting on top of the others is a photo album of my dad's -- pictures of him growing up on the farm in the '30s -- and in the service in the '40s. At some point, I may scan and share some of those photos. The gorilla is a Mold-a-Rama figure from Como Zoo in St. Paul. 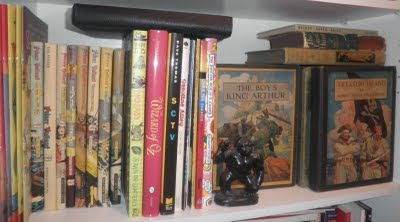 A pair of books illustrated by the great N.C. Wyeth. 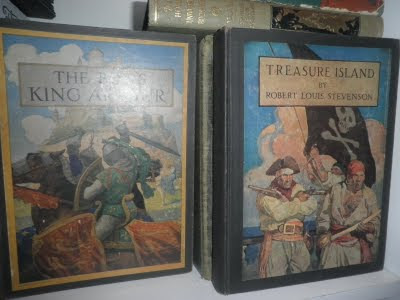 One of several books in my collection illustrated by Frank Godwin -- artist of the Connie and Rusty Riley comic strips. We had a Godwin illustrated version of Robinson Crusoe in the house when I was growing up, and I adored the drawings in it. Somehow, I did not end up with that -- but I've since collected many other books with Godwin illos. 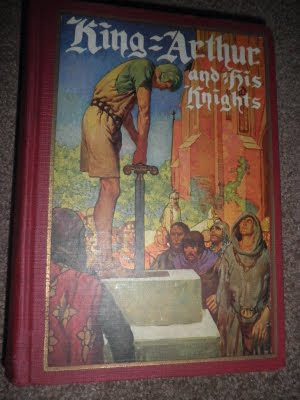 Books, books and more books -- and a resin Dracula "Soaky" -- a fantasy item, as one was never commercially produced ( a gift from another UMA pal). 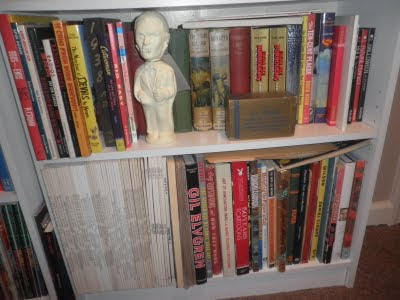 I loved this goofy Animal Lore book when I was kid, and recall many an hour flipping the pages to make the different combinations of animals. I also recall my father and me making our own versions -- folding paper and each of us drawing a part of the animal. That original copy is long gone -- this is a replacement I bought a few years back. 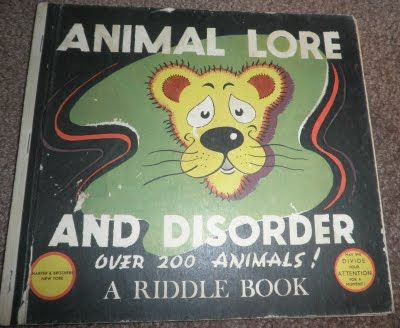 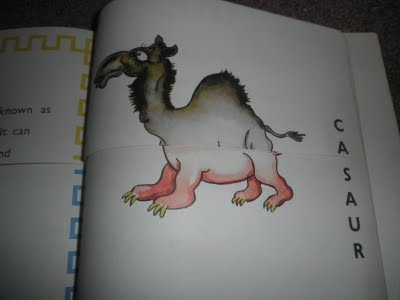 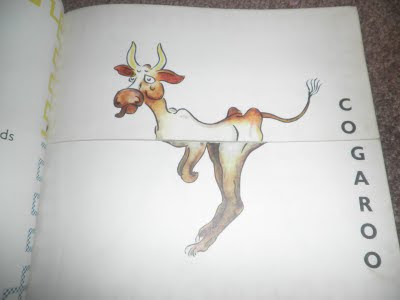 Somehow or another I seem to have started a collection of Joe Bonomo items! I think it started with this little boxed set of mini-books, which, if I recall correctly was a gift from my friend Barry Luebbert Phillips. All the books in the next picture down are stuffed into this little box! 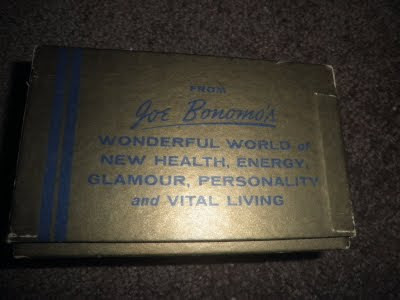 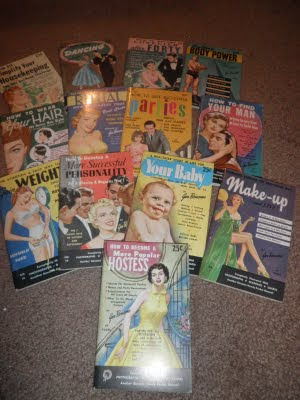 This copy of stuntman Bonomo's self-published autobiography/photo scrapbook came from an auction of the the estate of Herman Cohn. Herman ran the local newsstand where I bought all my comics, magazines and paperbacks as a kid. Bought my first Playboy there, too! This copy is signed to Herman by Bonomo. 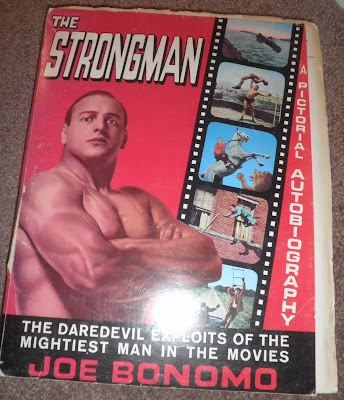 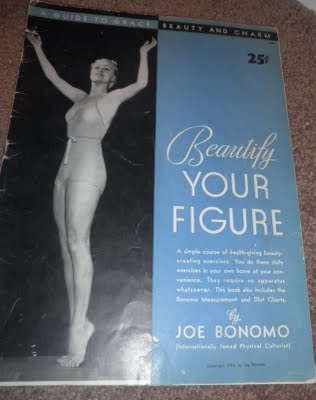 A wonderful book -- Forty Illustrators and How They Work -- a few selections from the interior shown below. 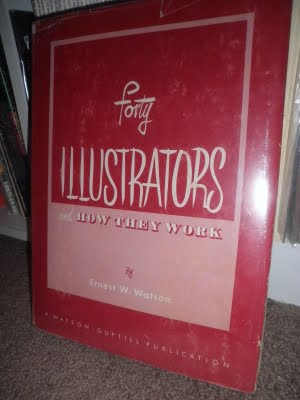 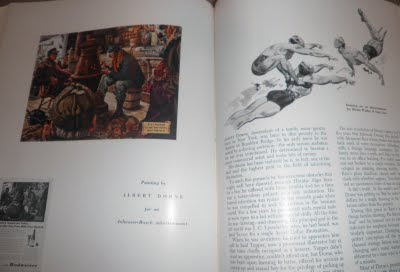 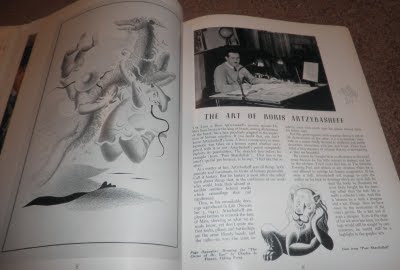 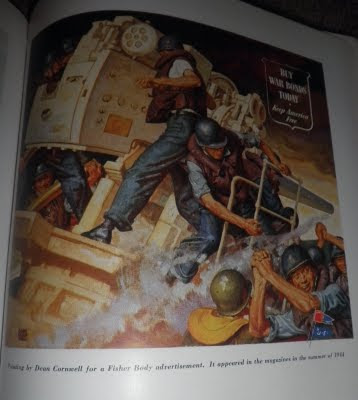 I was thrilled when I opened this collection of editorial cartoons to discover it was a signed copy. I've since learned that pretty much every copy out there is signed as well! OK -- maybe not a rarity -- but I still like it! 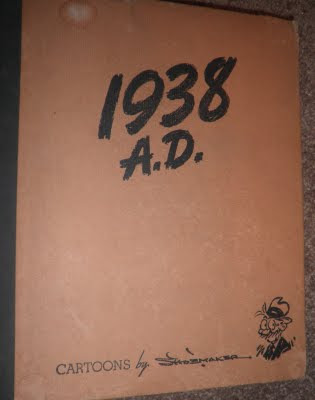 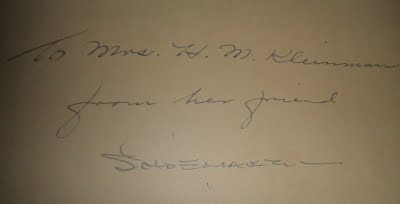 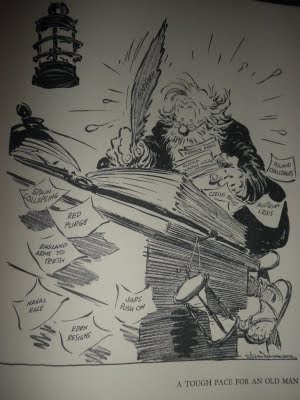 A recent find at a Half Price Books store -- this '30s Mickey Mouse book is pretty darn sweet. I don't actively collect Disney items (except for Pinocchio stuff) -- but when something like this falls into my hands for cheap (ten bucks!), I'm not going to walk away from it. 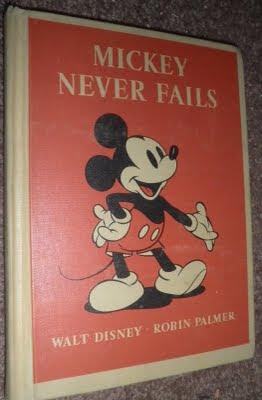 A pair of the Prince Valiant volumes I collected back in the late '70s. I think I got all these at Readmore Book World in Rock Island. Readmore was (is?) a great bookstore, and I used to drive there several times a month to pick up new books, magazines and comics. 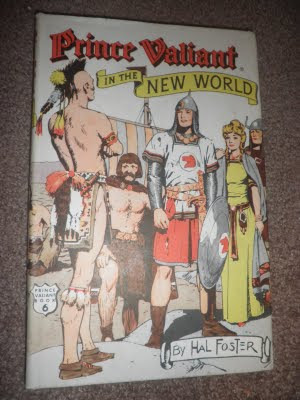 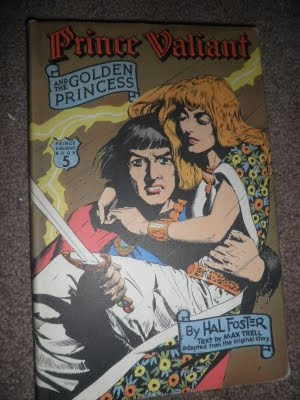 The only baseball card I own -- Bob Uecker! Why? Why the hell not? 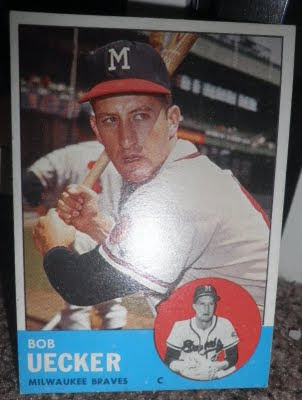