Our recent move from the Twin Cities to the Kansas City area gave me the opportunity to reorganize my collections and assemble a new studio room. I thought it might be fun to tour the studio one collection at a time. For today, it's Batman.
I've been a fan of the character since I was a kid, reading the Dick Sprang/Bill Finger material in DC's "80 page Giants" and watching the Adam West TV show first run. My professional association with the character lasted more than a decade, as I inked one after another of DC's animated style Batman comics.
I started with Batman and Robin Adventures and went on to ink Gotham Adventures, Batman Beyond, Batman: the Lost Years, the SubZero adaptation, the Superman/Batman World's Finest graphic novel (Eisner Award winner!) and The Batman Strikes. I ended my run with a few issues of Batman: The Brave and the Bold. I'd hoped to get a shot at penciling and inking that particular series, but, alas, it was not to be, and I've gone on to other things.
During my time on the books, I collected quite a few Batman items -- and here's what's on display in my studio. This little bookshelf was in my bedroom when I was a kid, and it's travelled with me everywhere I've lived. It's currently holding a number of Batman figures that reflect the look of the character from the various TV cartoon-based comics that I drew. A '60s vintage "Soaky" shares the top row with a '60s ViewMaster packet.
The gem of this collection is the Aurora Plastics' Penguin model kit on the bottom shelf. It's a particularly rare piece, and I was lucky to find it. I actually found two -- still sealed in their boxes -- at a flea market in Iowa. I purchased both kits and sold the better condition of the two to a Batman collector, recouping most of my investment. I then opened the one in the slightly crushed box -- doing so while on-line with a group of fellow model kit collectors -- describing the process (and the still-present "Aurora smell") as I carefully removed the cellophane from the back of the box and inspected the like-new contents. 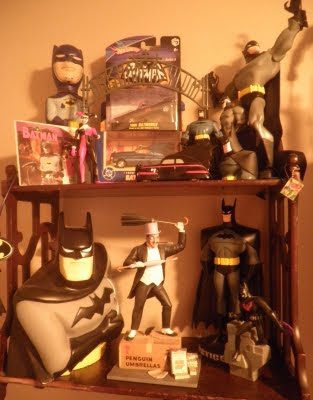 I'm sure some collectors will be horrified to hear than I opened this rare, sealed kit -- but I wanted to build it, darn it all! And so I did. You can see the results in the close up below. I love having this little guy on display and have no regrets about building and painting him. You can see the box, as well as a boxed Aurora Robin kit -- which I'll also build sometime -- in the next pic down. 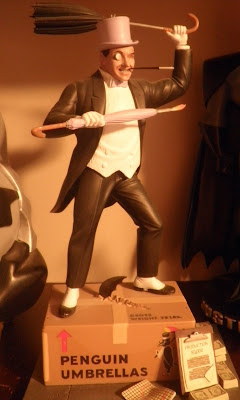 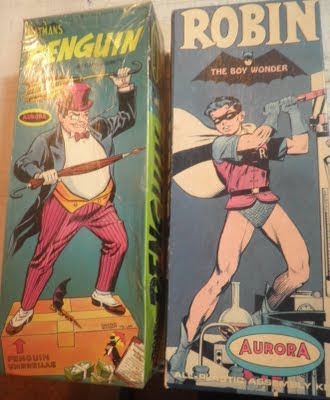 This later edition of the Aurora Batman model is waiting for me to build it. The box art, often credited to Neal Adams is actually by Dick Giordano. I do have a build up of the first issue of the kit, waiting to be restored -- but don't have the box (though I did own it as a kid). One of these days I'll add that '60s box to my collection -- as I love the iconic Murphy Anderson illustration and the bright yellow background on the thing! 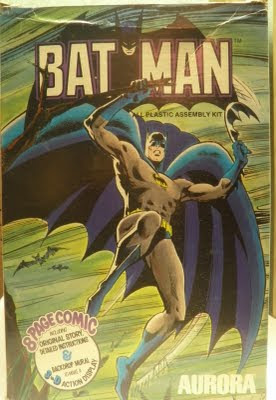 This batch of Batman-related books contains a few foreign editions of my own work -- and a number of books in which I've collected autographs of other Batman creators. The bookends are a Warner Brothers Store Two-Face set. Pee-Wee Herman's Billy Baloney and the Famous Monsters paperbacks are a little out of place here -- but that's just where they landed. 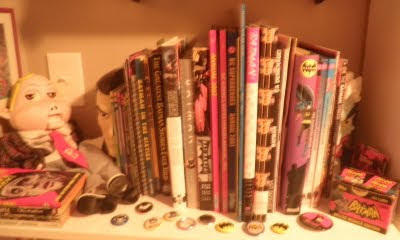 An autographed photo of Adam West hangs on the wall above the two Eisner Awards I have, thanks to my work on the Batman books.

I also collected signed pics of some of the other Batman TV show actors -- some in person (Adam West, Frank Gorshin, Yvonne Craig) -- others were gotten for me by friends. 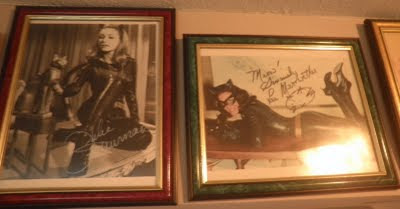 This is a Shelly Moldoff splash page recreation. I purchased this directly from Shelly some years back. One of the treats of working on Batman was getting to know other Batman artists -- as a member of a fairly exclusive club. I had lunch with Shelly at a con and he opened up and told me all sorts of stories about Bob Kane. Interesting stuff.... 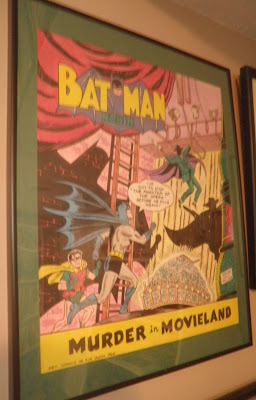 Below is a Brave and Bold Batman/Elongated Man page, signed to me by artist Jim Aparo and writer Mike Barr. Aparo's signature was acquired at a Chicago Con, where I had the pleasure of introducing Jim to Golden Age Batman artist Dick Sprang -- my finest fan moment. I do have a few things from Dick -- letters, prints, etc. I never could afford to get on his commission list -- but am more pleased to have counted him as a friend. Exclusive club, y'know. 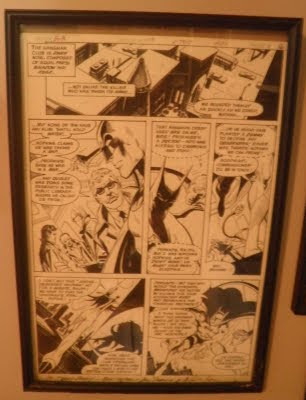 So that's it for the Batman segment of my studio tour. I'll share some more of my collections soon. Now that we're fairly well settled in to our new place, I'll be able to post here more regularly again. Packing for the move turned up all sorts of interesting stuff -- some I'd forgotten about -- and I'll be showing it all here eventually. Come on back and see.
Posted by Terry Beatty at 7/22/2011 04:29:00 PM

Email ThisBlogThis!Share to TwitterShare to FacebookShare to Pinterest
Labels: Batman Adventures, Batman Beyond, The Batman Strikes