Opposite my Batman collection sits this little art deco bookcase. This originally belonged to my mother's sister Ruth. A number of the books that reside in it came from my father's cousin -- also named Ruth. And so, this is forever and always "Ruth's bookcase." There's even an illustrated edition (Arthur Szyk) of The Book of Ruth on the bottom shelf.... 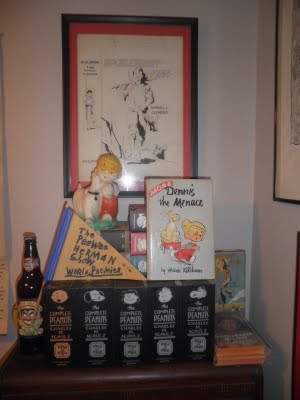 Taking up increasing amounts of space on the top of the bookcase are the current reprint volumes of Peanuts and Dennis the Menace. The Coney Island beer bottle is a recent addition. Inside the case are a variety of books and collectibles. 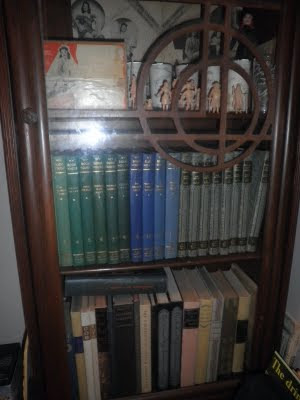 This Goldsmith edition of Huck Finn has cover art by Henry Vallely -- the prolific illustrator whose work was often found in original content Big Little Books. The original art for this illustration hangs on the wall. The Sgt. Bilko paperbacks are just a few of the Bilko items scattered throughout my collection. 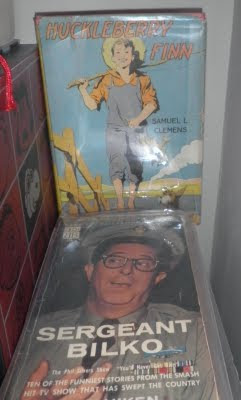 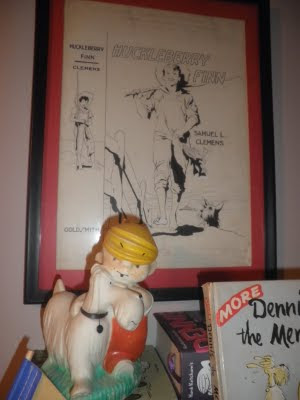 The new Dennis volumes are kept company by a vintage vinyl figure of Dennis and Ruff -- and a signed edition of More Dennis the Menace. I found the book at a used bookstore on a long-ago trip to California -- priced no higher than the other Dennis hardcovers they had. I suspect they'd never noticed the inscription and drawing from Hank Ketcham inside! 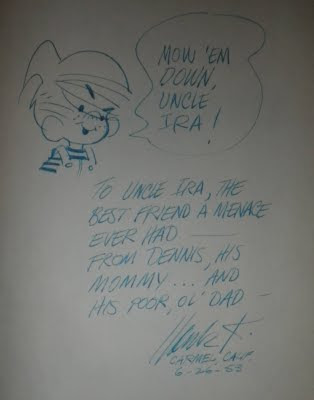 This PeeWee Herman pennant was a gift from Paul Reubens -- from a visit Max Collins and I made to his Los Angeles digs during a San Diego Comic Con trip. We clueless Iowans had no real idea how far LA was from SD! The drive back to San Diego was a long chore -- and we very nearly missed our flight home the next morning due to oversleeping. Thanks to old friend (and TBG publisher) Alan Light pounding on our hotel room door, we managed to get up just in time to rush to the airport! 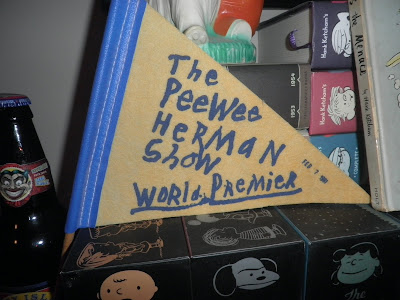 The witch version of my Trick or Treat "garage kit" lurks in the corner of the top shelf. Sharing that space are a number of items from the Earl Carroll Theatre. This Hollywood hotspot was famous for the celebrity signatures it had on display -- as well as their lovely dancers. That's a program from one of the Earl Carroll Vanities shows, signed by the performers leaning against the back of the bookcase. In front of it, is a set of six glasses covered in faux autographs of the biggest movie stars of the day. An ad for one of these sets claims eight total -- but the shipping box for same (see below) only has room for six -- so perhaps there were multiple versions. 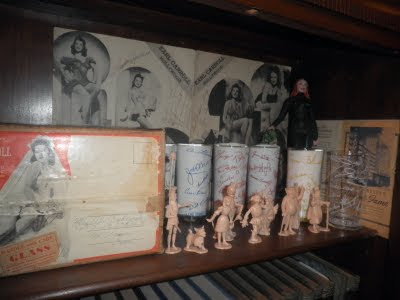 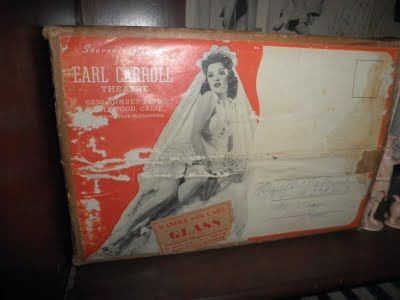 This little -- and fairly flimsy box -- is what the glasses were shipped in -- from Hollywood to Iowa. Not a nick on the glasses. Can you imagine shipping something so fragile like this today? They wouldn't make it past the front desk of the PO before being shattered! Some more Earl Carroll paper below. 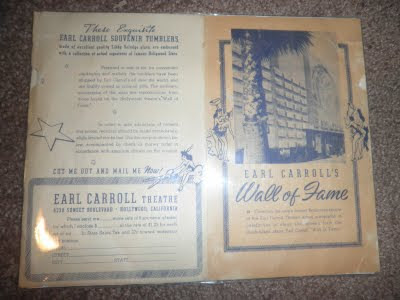 Here's a better look at the glasses -- well, five of the six anyhow. And a good look at the Aurora Plastics OZ-kins -- which seems to be missing one figure -- Wooden Sawhorse -- which has since turned up, thank goodness! These are based on the original Denslow illustrations for Wizard of OZ, and are very nicely done. This set was made in '67 and is fairly tough to find complete. Can you guess which figure is almost never found unbroken? I'm rather amazed that long thin piece of plastic on the left hasn't gotten snapped in one of the three or four moves these figures have been though with me. I guess I must pack things well, huh? 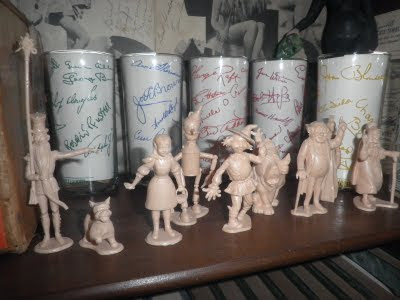 The rest of the bookcase is taken up by -- books! The My Book House series is a recent purchase -- and one I hope to share with my son as he gets a little older. The bottom shelf is mostly books that I inherited from the aforementioned cousin Ruth -- with a little Rockwell Kent and Lynd Ward of my own mixed in. 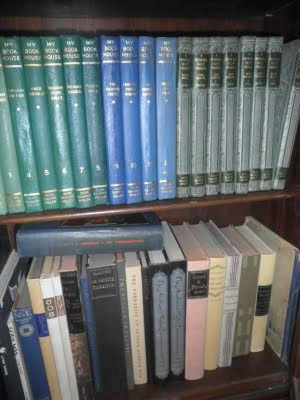 One of the My Book House volumes -- these are chock full of great stories and illustrations. 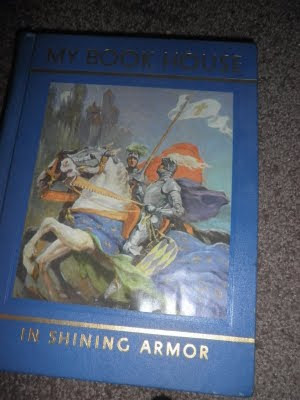 I love Rockwell Kent's art and writing. N by E is a particular favorite. 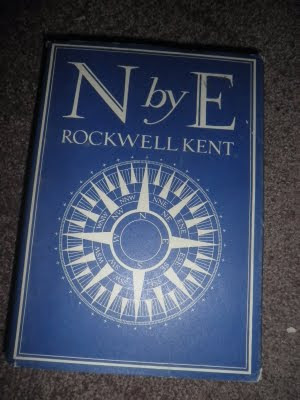 Arthur Szyk illustrated edition of the The Book of Job, followed by an interior illustration. Gee -- why didn't I photograph The Book of Ruth, considering...? 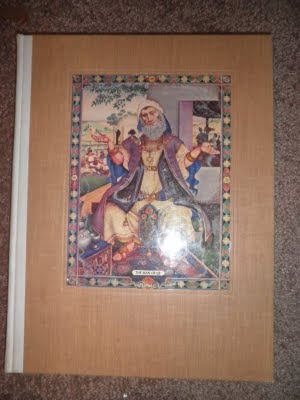 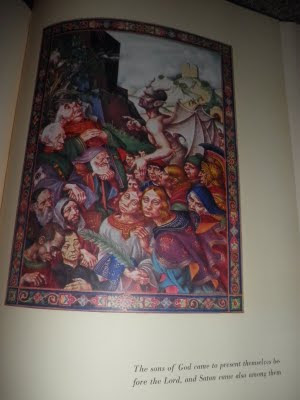 A Lynd Ward illustration from Beowulf -- one of cousin Ruth's books. 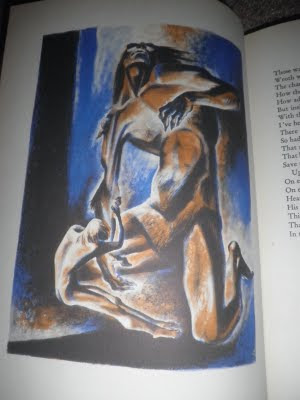 And finally, from on top of the bookcase -- and hidden by the beer bottle in the pic of that above -- is a Tintin tin! And if there's anything more fun to say than "Tintin tin," I want to know what it is! Much more Tintin in a future installment of this tour. 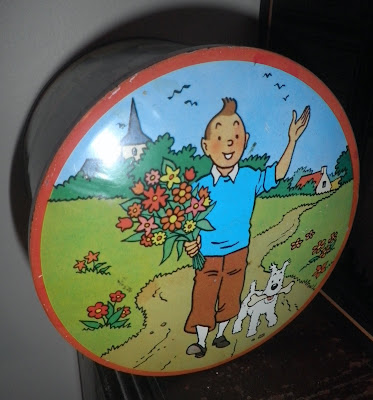 Very cool, Terry. I salivated over that art deco bookcase- much coveting!
Do you have a lot of your own art on display?

Too much other stuff to display much of my own art -- only the Johnny Dynamite book cover on the wall n the studio.