From left to right, here is a garage kit of Flash Gordon's Aura, sculpted by my friend Chuck Needham -- an amazingly lifelike piece. Her shoulder decorations came loose in the move -- just some of the dozens of model kit pieces that need repair after the long ride in the moving van. In front of her is a vintage plastic Halloween witch, and at her feet, a vintage pin-up ashtray. In the window are carnival chalkware representations of the Lone Ranger, Charlie McCarthy and Superman -- the latter in a yellow suit! A Devil bobble head. my sculpt of a Haddon Sundblom Santa Claus and a framed pic of the Cleaver clan fill up the rest of the window space.
In the front row are Barney Google and Snuffy Smith salt and pepper shakers, my sculpt of Bettie Page, a reproduction of the Dracula figure Bela Lugosi used to give out as a gift, the "TerryToys" faux-Marx Dracula and a resin Sam Scare (Scary Monsters magazine mascot) head. In front of them, a little figure of a girl that belonged to my mom -- and a pair of repro Jackie Gleason Marx figures. At far right is a resin copy of the award plaque from the Aurora/Famous Monsters model kit contest of the '60s. I painted this in imitation of James Bama's Frankenstein portrait. Oh -- there's an empty Kayo bottle and an original Mars Attacks card there, too.

I found this bookcase, intended for CDs and DVDs, was just right for BLBs -- that's big little books, for the uninitiated. I've been collecting BLBs since I was a kid, accompanying my folks on antiquing trips. They'd buy furniture and glassware -- and I'd, as often as not, get some comic character item -- or a BLB. Sharing space with the books here are some Forbidden Planet figures, a '60s vintage plastic witch, a cool '50's rocket milk shake shaker, a rare Rockwell Kent book and a photo of the Clyde Beatty Circus Sideshow.
There are several Clyde Beatty BLBs here, too -- as well as BLBs of the fictional Tom Beatty, Ace of the Service. Thomas Beatty was my grandfather's name -- but he was a dairy farmer, not a BLB character! Whether I am related to Clyde or not is something I still have to research -- but looking at pictures of my father as a young man and comparing them to pics of Clyde, they look more alike than my father and his brother did!
A reminder that you can click (and then click again) on this, or any picture in these posts, to see a much larger version, should you want to see the details....
My Japanese editions of Lone Wolf and Cub fill the taller shelves. I bought these at a San Diego Con, years ago. As I was walking down the street to take my haul back to my hotel room, I passed Frank Miller -- I held one of the books up and said, "Hey, Frank -- look what I got!" Seeing what I had just purchased, he said to me, "You're doomed!" 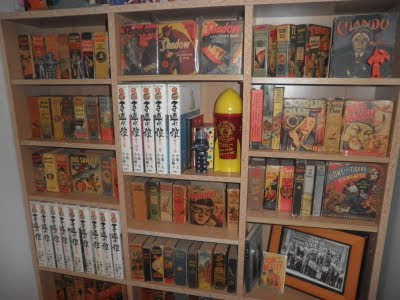 More BLBs. The Lone Ranger Cheerios box is a repro -- but the Roy Rogers Grape Nuts box is the real deal. The Aurora Witch is the recent glow reissue. 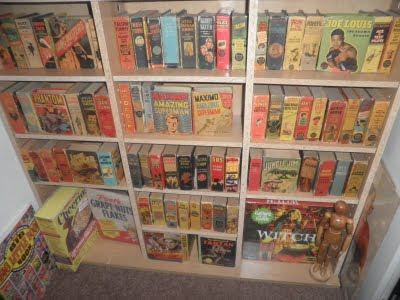 A boxed Marx Super Circus set is barely squeezed into the space between the top of this bookcase and the ceiling -- it needs a larger shelf somewhere for better display. Below it we have my carnival sideshow sculpts, Nancy and Sluggo dolls in their original packaging, rare Gasoline Alley soap figures, amazingly holding most of their original paint, bisque Pinocchio figures and some Li'l Abner items that were crowded out of the Abner shelf in another bookcase. A recent Robby the Robot bobble head remains in his box. The little plastic robots were a gift from my dad -- the snowmen from a friend in Minneapolis. 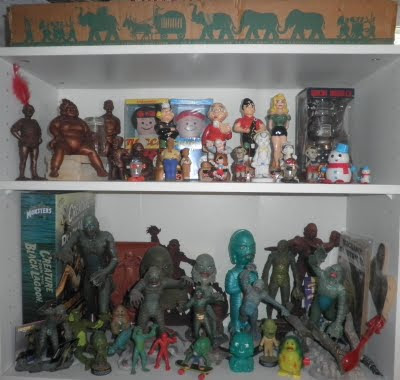 The Universal Monster most represented in my collection is the Creature from the Black Lagoon -- or Gillman as he's sometimes called. This mixture of vintage and recent items fills this shelf, and anything new that I might add will have to find somewhere else to lurk -- I've run out of space here! I love the design of the Gillman -- still effective, despite being more than 50 years old.
Lots and lots of Tintin overload the next couple shelves -- along with the Famous Artists School's Painting and Commercial Art courses. 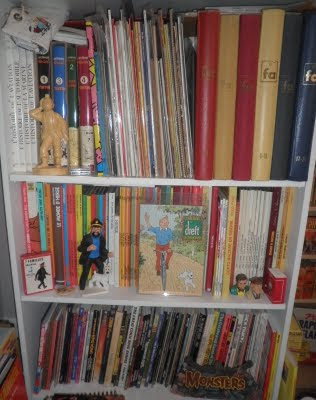 Mitch O'Connell's pencil prelim for the cover of Johnny Dynamite #1 -- a gift from Mitch. I'd like to own the painting -- but I can't afford it! 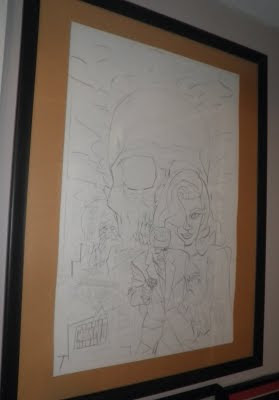 A William Campbell Silly Surfer painting and a signed pic of Mickey Spillane. 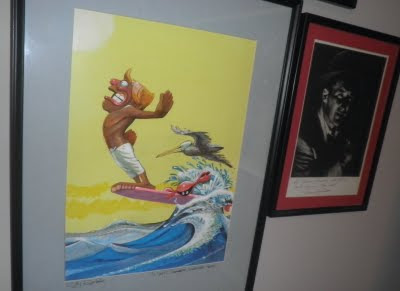 Signed pics of Denise Nickerson (Dark Shadows and Willy Wonka) and Van Williams (Green Hornet) hang next to my Will Eisner nomination certificate from '92. Max Collins and I were nominated as best writer/artist team. Peter David and Todd McFarlane won the award. But the certificate still looks cool, doesn't it?

And last, but certainly not least, autographs from Ray Harryhausen, Anne Francis and Forry Ackerman -- the later on an Aurora/FM model contest certificate. The first two were gotten in person at Wonderfest in Louisville -- the latter at Forry's "Ackermansion" on a California trip many moons ago.

You have a really nice collection.