I'm sorting through my art files, looking for pieces to include in a "sketchbook" I'm putting together -- and also to sell on eBay. Here's a batch I've just put up for grabs (seller ID: beattylee) -- and I thought I'd share them here on my blog as well.

The first three pieces were done at a Twin Cities Dr. Sketchy's session. The first two drawn rather quickly, as these were short poses -- but I think they turned out nicely -- and the whole roller derby fight thing is amusing. The third in this set is a more finished piece in pencil and ink -- and is one of two drawings from this session done in that method (the other not shown here). The loose ink line here was the inspiration for the "sketchy" drawing style I later used in drawing the Return to Perdition graphic novel (now set for publication in November of this year).

As always, you can click on the pics for a larger view. 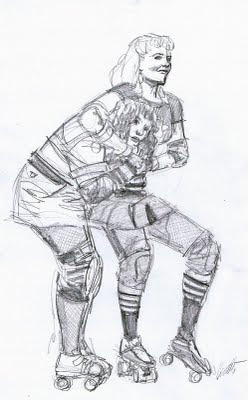 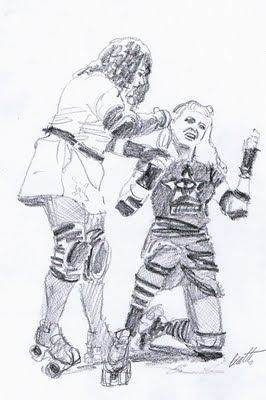 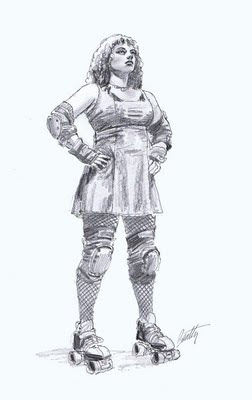 Also from Dr. Sketchy's is this series of quick poses of a belly dancer model. I enjoy capturing the gesture/pose quickly in these sessions -- and often am quite pleased with how the multiple images work together on one piece of paper. 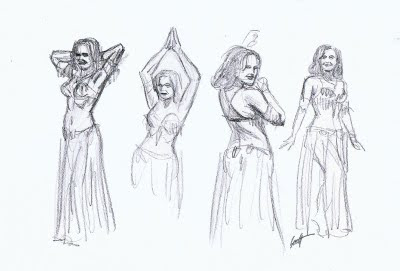 Here's a page of preliminary pencil sketches for the Monsterwax Shock Stories trading cards. I drew these prelims at print size and enlarged them for inking. Of these nine cards, three saw considerable changes before print. The others are very close to the final images. 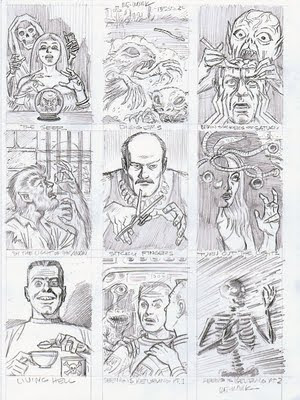 This is the pencil prelim for the miniature sideshow banner print that was included with my boxed sets of resin "Freaks and Oddities" figures. Again, this was done print size, and then enlarged for the final painted version. I'd wanted to do a second (and maybe third) set of these, but have not had enough of a response to justify the hefty investment of time, work and money -- darn it. I do still have a few boxed sets and some individual figures, should anyone want them. 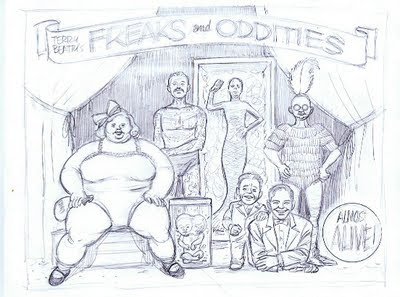 Vampirella was supposed to be a commission -- but the buyer had to back out before finalizing the purchase. I usually take the money up front before beginning the work -- but for some reason, I'd pencilled this before getting payment. I recently inked and colored the piece, as I just couldn't leave it unfinished. 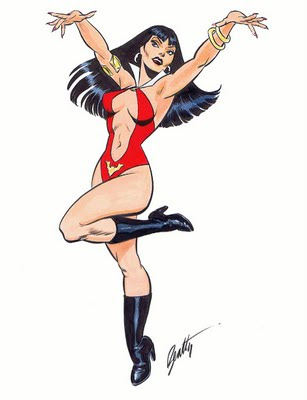 In the early 1980's, I drew several dozen covers for Alan Light's weekly fanzine, The Buyers Guide for Comic Fandom. Most of those originals were sold long ago -- but I'd held on to these three as they were particular favorites. But the time has come to let them go -- and in fact, the Halloween cover is already sold.

The 3D cover was done the old-fashioned way -- just as 3D comics were done in the 1950's. There are four layers of inked art on acetate, with the back of the images whited out with paint. The deepest level, the background, is on standard bristol board. Each of these layers were shifted a bit to the right -- or left -- to create the red and green plates needed for print. The print version turned out quite well -- though it wouldn't have, had I not supervised the printing myself -- as the printers had not trusted my notes, and were set to use a deep blue ink, instead of the blue/green that works much better for 3D. 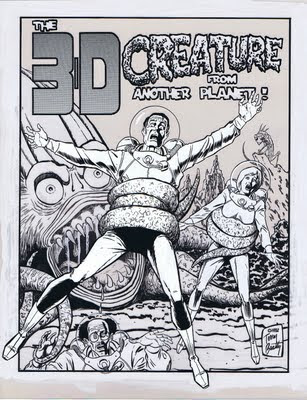 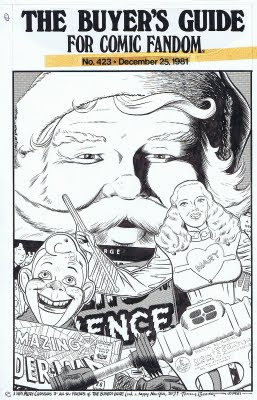 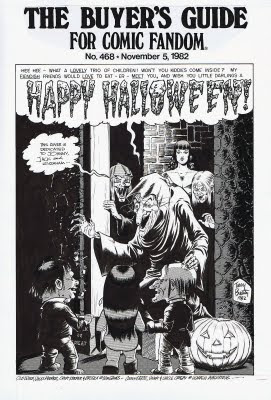 Thanks for stopping by. I hope you enjoyed this little look through my art files. I'll be posting more eventually, so please do come back soon!

I never get tired of viewing your work!
Diane Vander Linden