Here's something I was playing with last night after finishing up pencils for several Return to Perdition pages. This splash panel by Russ Heath (from Atlas Comics' Menace #2, 1952) is one gorgeous piece of work -- but, as with most vintage comics, the printing leaves much to be desired. The blacks are spotty and faded -- the color is off register -- and all of that hurts the image. So I decided to play around a bit with Photoshop and see if I could come up with a version that was easier on the eyes. 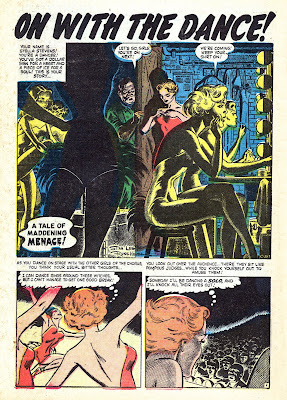 First things first, I switched from RGB mode to CMYK. Then using the channel mixer, I dropped out all the colors, leaving just the black. I then boosted the intensity of the black and touched up the solid areas. To me, this shows off Heath's drawing to much better advantage. But the color does add something... 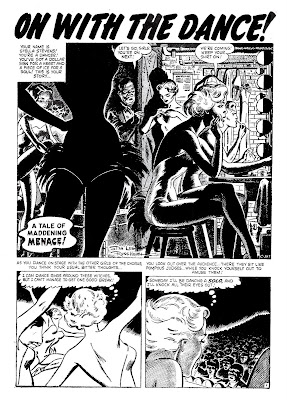 So, sampling the original color choices, I re-colored the page, making a few corrections, and eliminating all that off register mess. Given a higher resolution scan and some more time, this could be sharper and slicker -- but for viewing on the web, I think this is still a vast improvement. And it was a fun experiment for me. If time allows, I may clean up the rest of the story, if only so I can see Heath's lovely line work without the terribly off register reds that plague the pages (worse on the rest of the story than this splash). 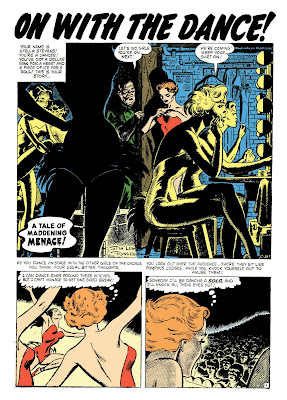 The story itself may not be Stan Lee's finest hour. (Spoiler alert!) I don't know how many '50s and '60s suspense/horror comic book stories ended with a dancer cursed to dance until she/he dies -- but I do know it's a "shock" ending that loses it's ability to shock the fifth or sixth time one stumbles upon it! And how odd is it that the protagonist of this tale is named "Stella Stevens?" The actress Stella Stevens (Appassionata Von Climax in the film version of Li'l Abner and Stella Purdy opposite Jerry Lewis' The Nutty Professor) didn't begin her film career until 1959, seven years after this comic was published. Did Estelle Eggleston (Miss Stevens' birth name) take her stage name from this comic? Seems far fetched -- but who knows?
Posted by Terry Beatty at 8/19/2010 09:32:00 AM