The other day, I posted an Uncle Fuddly story from Quality's All Humor Comics. The Paul Gustavson-drawn feature is one of the highlights of the series -- but there's plenty more worth seeing in the pages of the comic. Ten issues of the 17-issue series are available for viewing at the Fury Comics website -- and for download at the Digital Comic Museum.
Below are a few select pages that I hope will send you to one or the other of those sites to check out this little-known but remarkably fun comic.
Check out this amazing splash page from Klaus Nordling's Odd Jobs Inc. As far as I'm concerned, that's as cool a splash page as anything Eisner or Cole ever drew. I love this sort of cartooning, and think it's a shame that there's pretty much no market in which to do this kind of work these days. We really need to do something about that.... 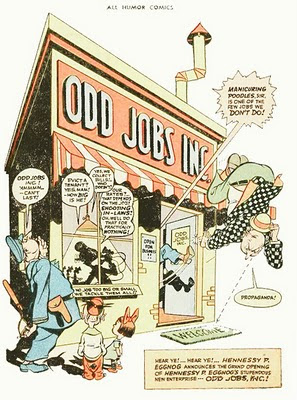 Kelly Poole is the lead feature in most issues of All Humor. Most are signed "Bart Tumey," an artist I'd never heard of before. Very little information about him can be found on the web. The most detailed info I could find was in this Lambiek entry -- just a list of a few features he drew. The splash page below has a funky Wolverton/Elder feel to some of it -- but mostly, Tumey looks to me like someone who might have spent some time working for Al Capp on Li'l Abner. Seriously -- look at that 3/4 rear view face in the foreground of panel four in the story age below the splash. Could that be any more a stock Abner character? At the very least, there's a strong Capp influence here. 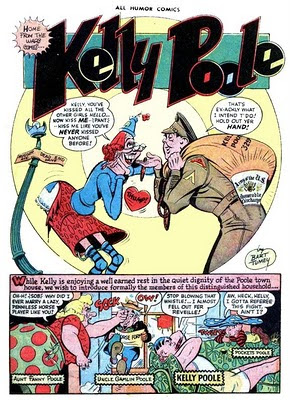 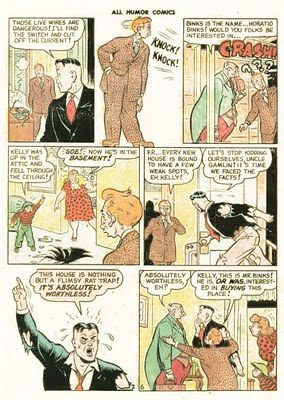 Harry Sahle contributes a feature called Hickory (originally Acorn Acres) to All Humor. There's some really great cartooning from Sahle here. The rough and tumble rural-based humor of Hickory proved popular enough that it eventually led to him getting his own comic book. 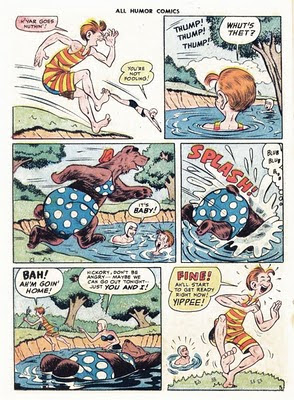 Even the lesser features in the comic are a lot of fun. Take a gander at the simple, appealing cartooning of Al Stahl on Bozo the Hobo. 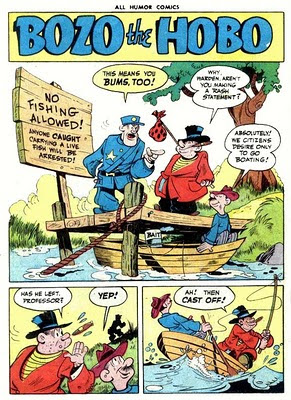 And then there's the flat out weirdness that is Atomictot! Some Atomictot stories are drawn by Gill Fox -- others (in a truly odd drawing style) are clearly by another hand (Ernie Hart?). 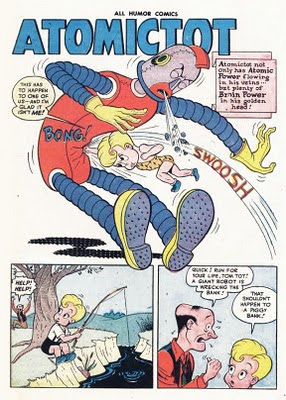 If you like what you see here, check out the links I posted earlier to see more. In the meantime, I'm just going to wish we had comics of this sort (as well as the horror anthologies I've been posting from) on the market now. I would so much rather read well-drawn wacky, goofball humor stories and over the top horror/suspense tales the likes of which I've been posting here, than the turgid, overly serious super hero books dominating the market today.
A truly healthy comics market would have room for the modern equivalent of All Humor or Web of Evil. We've got to bring back cartooning to comics, folks. There is a market out there that's not being served. Kids still love good comics -- when they are exposed to them. We have to work on that last part.
Posted by Terry Beatty at 2/04/2011 05:59:00 PM

The Odd Jobs story has been credited to Jack Cole himself. Check the Cole website Cole's Comics. Bill Tumey was indeed an Al Abner assistent. I checked that out when I came across him in a Dick Tracy parody in one of the Mad imitations of 1954...