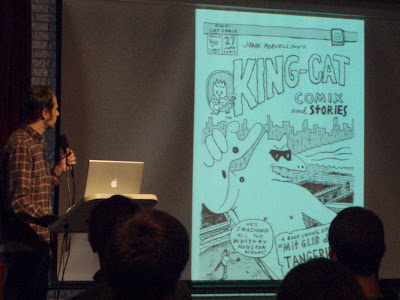 "King-Cat" cartoonist John Porcellino stopped by MCAD yesterday to speak to a group of comics students. He's on tour, promoting a hardcover collection of the best of the early years of his comics zine, "King-Cat." Check it out at www.king-cat.net.

Here's a shot of John and his tribute to the Kirby/Ayers giant monster comics -- which, surprisingly enough, he says were a big influence on him and his work!
Posted by Terry Beatty at 10/12/2007 10:21:00 AM