After the four issue Wild Dog mini-series appeared, Max Collins and I did several serialized Wild Dog stories for Action Comics Weekly. Wild Dog appeared on some of the covers -- but none of those covers were drawn by me. Below is the cover of #615, penciled by Barry Crain and inked by Rick Magyar. Recently a client approached me about recreating the cover, to see what it would have looked like had I inked it -- so, with Barry Crain's OK, I did just that. 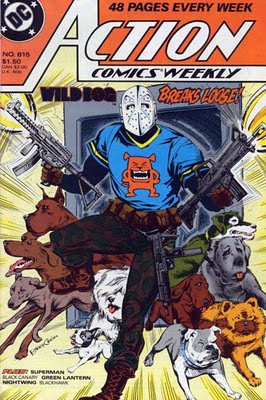 I scanned and enlarged the printed cover, dropping out the color to get a black and white version of the logo and DC bullet, etc. But the end result needed a lot of cleanup work. I replaced much of the type in Photoshop, and dropped in a cleaner version of the Wild Dog logo from a scan of one of my covers from the original mini-series. When I had all the copy cleaned up, I printed that onto a blank sheet of bristol board.
The next step was to use a lightbox to roughly trace the artwork in pencil. I then tightened up the pencils, using the printed cover as a guide. I did make some minor changes -- but mostly stayed faithful to what had gone before. I then inked the piece -- mostly with brush -- but also some pen work on the guns, crosshatching, etc. Rick's original inks were great -- and I don't think mine are better or worse -- just a little different. Barry certainly went to town with all those different breeds of dogs -- and the extra guns for our masked vigilante! All in all, this was a fun project, and a treat to revisit the character. Despite having had a fairly short run at DC, quite some time ago, Wild Dog's fans just won't let him die. 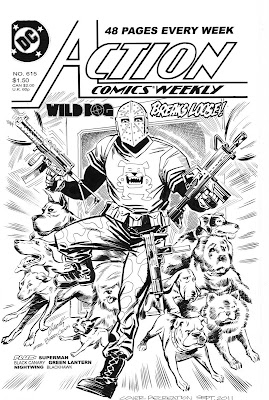 For further evidence of this -- here's a pic of me with an attendee at the recent Free State Comicon in Lawrence, Kansas. 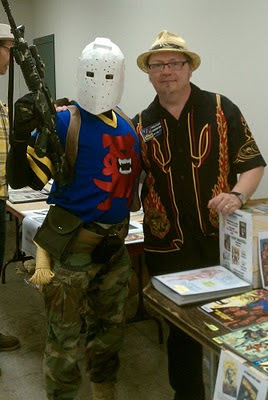 I have those issues! Good stuff. I love your work.

Love that guys Wild Dog costume. I am one of those wacky fans that want to see a reprint.