A current project has me working in a faux "Silver Age" style -- at times emulating '60s Marvel-style Jack Kirby. So for a warm up -- and some fun -- I decided to try inking a little Kirby art.
Like many of my fellow cartoonists, I've collected images of original comic art off the web. A certain auction house regularly posts great scans that are fantastic for study. But there's a limited amount of pencil art to be found -- it's mostly the finished inked product. Though there's plenty of Kirby pencil art to be found in the pages of The Jack Kirby Collector, I had a specific piece in mind. In this case I decided to try re-inking this Tales of Asgard splash, penciled by Kirby and inked by Vince Colletta. I had two disadvantages here -- no access to the original pencils -- and due to limitations of my printer, working on a 10 x 15 image as opposed to the larger "twice up" size this would have originally been drawn. The original page as inked by Colletta is shown below -- a scan taken from the original artwork.
(New content added 6/10/10): The first image is the scan I began with. In order to have a clean image for printing a blueline and reusing the lettering, I dropped out the yellowed tone of the aging paper. This caused a bit of fading to the thinner lines (see second image) -- but since I wasn't planning to reproduce Colletta's inks, but rather rework the piece in my own way, this would suffice as a working copy. I was not trying to stack the deck here by showing a lesser quality scan of Colleta's inks -- but rather show you what my process was and how I created my version. I've added this unedited original art scan in response to the charge of "foul" from the anonymous complainer in the comments.
I will add that I am not a rabid "Colletta hater," and find some of his inks on Kirby (especially early in the run of the Fourth World books) surprisingly nice. But he's far from my favorite Kirby inker (Frank Giacoia wins that honor) -- undeniably, he often did "hack out" the work and take shortcuts -- and in this case, made artistic decisions that don't make sense to me. That said, I think his version of Rinda's face is superior to mine -- and as previously noted there are other things I do like about his version as well.
Ultimately, I did this to have some fun -- and recharge my artistic batteries. Blueline or lightbox inking a Kirby piece has always been something I just flat out enjoy -- and as I've been pushing myself and fighting deadlines on several big projects lately, doing this served as a nice break and a fun experiment -- something I did in two and a half hours (a half hour longer than Dick Ayers told me he took to ink a Kirby page!) one night when I was having trouble sleeping.
No intent to play "foul" here at all. 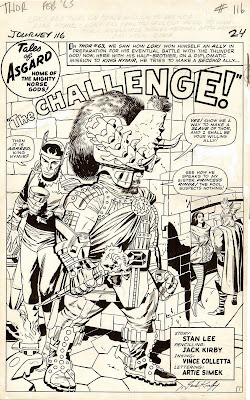 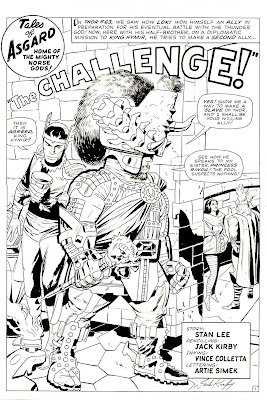 With Photoshop, I made a "blueline" (all cyan) version of the image -- then cut and pasted the black and white lettering back into the image. Since I was going to be inking this, I removed Colletta's credit (sorry, Vinnie!) -- and using existing letters from the credits box, added my name. I must admit, just seeing my name in Art Simek's lettering style was a kick well worth the trouble.
Now this has always been one of my favorite Kirby pieces. I love that crazy big helmet King Hymir is wearing -- how did Jack come up with this stuff!?! But, while I love the image, Colletta's linework fails to please me (though I must admit, his dry-brush "hairy" effect on the fur/feathers/whatevertheheckthatis on the helmet is kinda nifty). So I took my shot at re-working the inks in my style.
I did take a different approach to the line weights. Colletta uses an almost "coloring book" outline on Hymir's foreground shoulder/arm that I don't care for, and that's one thing I changed. In general, I tried for "slick" where Vince was "scratchy." Whether this version is better, worse or not changed enough to make a difference, I'll leave up to you to decide. I will say, this was a great deal of fun and helped remind me of just what it is about comics that made me fall in love with the form in the first place. I truly enjoyed "The Challenge!"
You can click on these pics for a larger image. Until next time, "Face front, True Believer!" 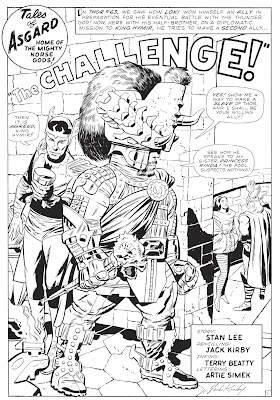 Nice experiment!
And Princess Rinda even looks slightly more
repulsed in yours...

Foul! The Kirby-Colletta scan you posted looks like crap. Even a good scan of the comic page would look 100% better than your example.

Anonymous: The scan is taken directly from the original Kirby/Colletta art -- the only major change I made was dropping out the yellowed tone of the aging paper in order to have a clean B&W version to work from. That did make the thinner lines fade a little -- but (in my opinion) not to the point that the scan looks like "crap," or that it invalidates the experiment.

Thanks for the larger images for viewing. Kudos!

It's definitely better. It's a shame Kirby's depression-era ethics kept Coletta on his pencils for so long (especially the Fourth World books).

Jack just couldn't bear to be responsible for putting a man out of a job.

I'd like to see Marvel have you reink his entire Thor run (except the Bill Everett issues)!

And you're right. Best hat ever.

Thanks, Paul. I doubt Marvel would foot the bill to have me re-ink the whole run -- but it's sure a fun notion to consider!