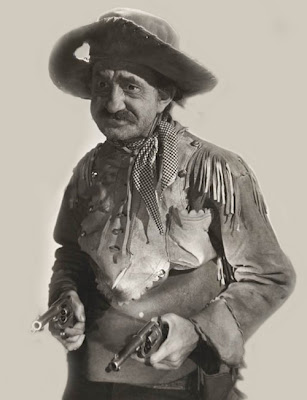 Emmett was born in Muscatine, Iowa on Valentine's Day in 1897 and passed away in Hollywood in October of '58 (I was nine months old then). He was an actor who played the comic relief in many Republic Studios Westerns, was in nine episodes of The Lone Ranger TV show, and made his last appearance in 1956's The Ten Commandments (unbilled as an old slave in the golden calf scene). Variety credits him with over 500 films! if that's correct, the imdb list must be incomplete at 164 (including TV shows).
Characters credited include: hobo, town drunk, saloon drunk, drunken stage driver, barfly, old panhandler, old timer, old timer in bathtub (!), old codger, bum, hermit and hillbilly -- some character names: Leatherface (!), Jackpot MacGraw, Fiddlefoot, Tombstone Boggs, Pancake Comstock, Grubstake Higginbothom, Elmer, Mr. Fuddy, Coonskin, Blizzard, Gumdrop, Paydirt, Twitchy -- and multiple appearances as characters named Ezra and Whopper.
I say the town should erect a statue of the guy - complete with beard stubble.
Other notable Muscatine natives include Ellis Parker Butler (author of "Pigs is Pigs"), my comics collaborator and novelist, Max Allan Collins, "Veggie Tales" creator, Phil Vischer, and my classmate and fellow artist, Kerry Grady -- and while he wasn't born there, a young Samuel Langhorne Clemens lived in the town for a while -- his brother Orion editing the local newspaper. None of them ever played "old timer in bathtub," though.
Posted by Terry Beatty at 5/28/2010 11:48:00 AM

I beg to differ.

I play oldtimer in the bathtub every day.

I just watched an episode of the Lone Ranger on Netflix. It was Legion of Old Timers.
Emmett Lynn played Banty Bishop. The reason I am posting here is because while watching the episode there was a scene in which Emmett jump from the ground directly into the stirrup with one foot and galloped off at full speed. I was astounded and started to pay more attentions to the character. I thought he was maybe 70 or so. If my math is correct he was closer to 52. Later I see him coming full gallop again into town turns a rides off. This was not a stunt man doing this, it was Emmett. So I became curious “who the hell is this guy” and found my way to this web site. On IMDB I fully expected to see references to his horsemanship skills but there was none. I agree. You should put up a statue to Emmett, but mount him on a horse going full gallop. Happy trails Emmett.