Sample art and a letter from Dick Giordano

In 1980 I prepared several sample superhero pages in an attempt at getting work from DC Comics. The Batman page below is one of them. I also drew a Superman and a Wonder Woman page, but haven't seen them lately. The inking is better than the drawing here, and the storytelling is a little clumsy. Details in the background of the second panel came from my parents' living room! I still kind of like the Robbins-influenced Batman in the first panel and the extreme Joker close-up in the middle of the page (gun is too small, though). 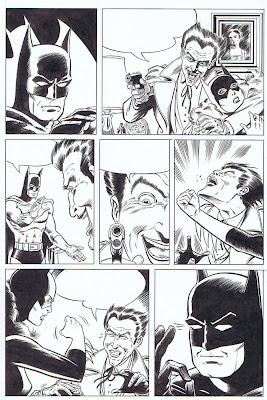 I'm not surprised this didn't get me work -- but I did get a nice hand-written letter from the late Dick Giordano in response. The positive tone of it was encouraging, and while I didn't send more samples to DC right away, I plugged away at my own projects -- notably my collaboration with Max Allan Collins, Ms. Tree. 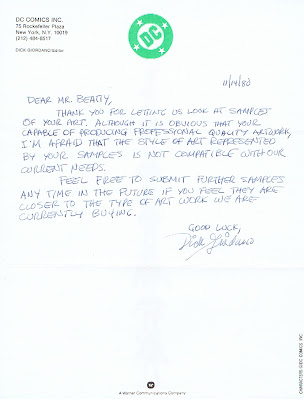 A few years later, thanks to Batman editor Denny O'Neil taking notice of Ms. Tree (and me taking the time to introduce myself to him at a DC sponsored party at the San Diego Con), I was invited to pencil something for an anniversary issue of Detective. Dick Giordano inked my pencils. I was thrilled with the results. 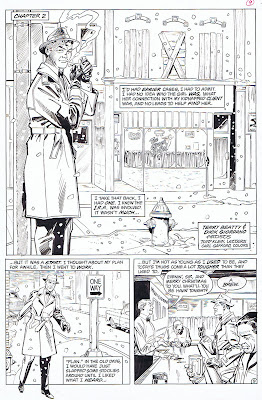 Ms. Tree eventually ended up at DC as well, for a ten-issue quarterly run. When that ended, I drew some more superhero samples, since I'd been drawing crime comics for over a decade, and wanted editors to know I could do more. The Superman sample below was part of a promo package I put together -- I did an inked version as well. Like my first samples, it didn't get me any more work from DC, and I spent a few years working for Warp Graphics, Tekno-Comix and others. DC would later invite me back, but that's another story. 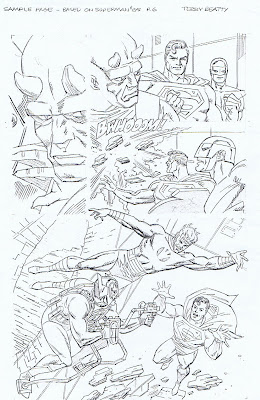 The Spider-Man page below is one of two I did for the promo package (pencils and inks -- this is scanned from a photocopy of the pencils prior to inks) -- there was an Avengers/Iron Man page, too. It also, got me nowhere with Marvel (my total output for them, in my three decades in comics, is one spot illustration and five pages of inks) -- but resulted in a very nice phone call from John Romita, Sr. -- who told me he wished they could publish comics that looked like this. At the time, the "Image look" was all the rage, and I was bucking the trend by being too traditional, I suppose. 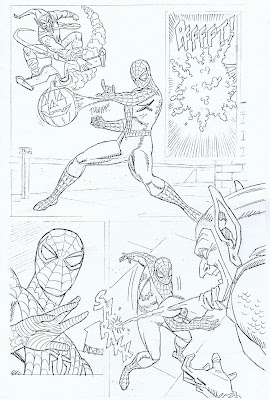 Man that Spider-Man is awesome.