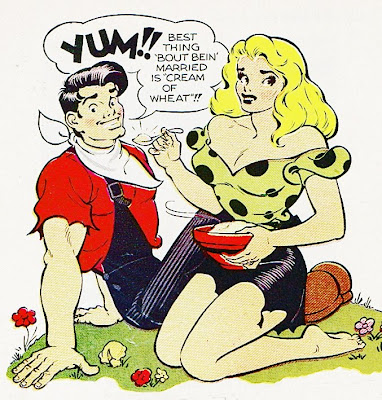 It's a testament to the popularity of Al Capp's comic strip, Li'l Abner, that clients must've been falling all over themselves to use Abner as pitchman for their products.  Have a look at the variety of ads shown here.  As always, click on the images for larger versions.
Abner and family want us to buy Fruit of the Loom underwear -- Abner seems to prefer boxers, while the next generation is sporting briefs. 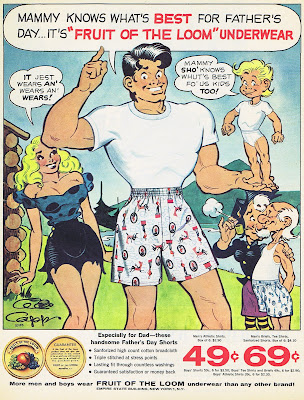 Abner is knocking back Kraft caramels in this ad.  A previous blogpost on comic ads featured the Daisy Mae version of this advertisement. 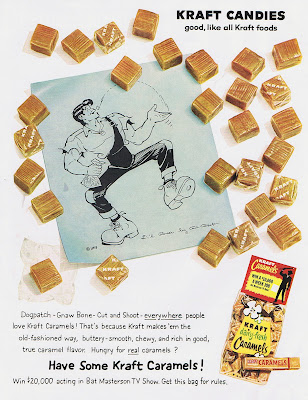 Abner hawks laundry soap, while urging you to name this Shmoo!  Heck, I'll name a Shmoo for 20 grand! 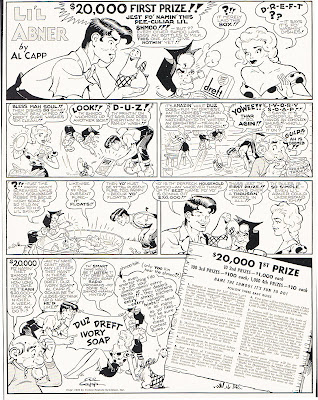 Abner plugs the Bob Hope movie, That Certain Feeling -- which, not so coincidentally, features a cameo by Al Capp! 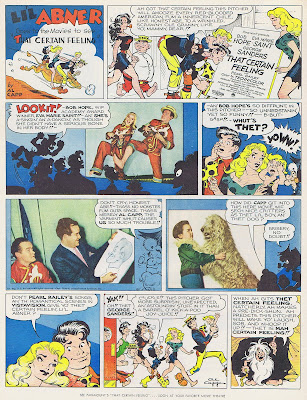 And now we come to the cream of the crop -- literally!  Cream of Wheat ran an ad campaign featuring Li'l Abner for over a decade -- from the early '40s into the '50s. The two full page ads directly below are not typical of the campaign.  Most of the ads were of the comic strip variety -- keep scrolling down to see three examples of those. 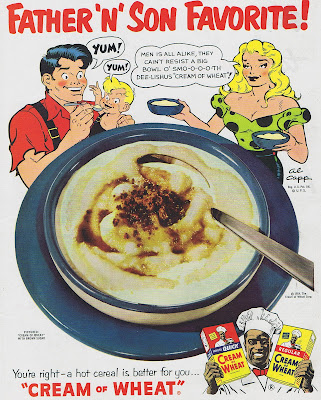 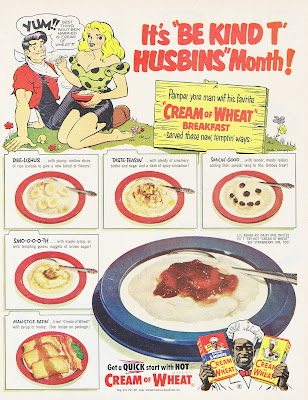 The first comic strip ad is an early one -- from 1941.  Early examples all have this "long shot" look to them, but it wasn't long before someone figured out the format allowed for a big top panel - and that panel could feature a big sexy shot of Daisy Mae (or Wolf Gal, on a few occasions) -- and the strips started looking more graphically pleasing (in more ways than one).   Ads usually ran in black and white or two color -- I've only seen a very few full color examples.  I have dozens of these -- and if you folks like them, I'll scan and post more -- just ask.

Alas, all good things come to an end.  After a decade of  selling their product with comic strips featuring a lunkheaded hillbilly and (more importantly) his gorgeous backwoods gal, Cream of Wheat retired the Li'l Abner campaign and brought in a rambunctious kid to pitch their cereal.  Here's Dennis the Menace taking Abner's place.  Dennis' mom is kinda cute -- but I must admit -- she's no Daisy Mae.

Now before anyone takes me to task for forgetting the Fearless Fosdick Wildroot Cream Oil ads -- I do have a few -- and will scan and post them soon.  In the meantime, please let me know if you'd like to see more of these comic strip ads!
Posted by Terry Beatty at 11/15/2009 03:08:00 PM