For the past several years I've been teaching in the comics program at the Minneapolis School of Art and Design (MCAD). It's been a while since I've posted any of my students' work, and I thought it'd be fun to look at some of what my most recent crew turned out last semester. The work that follows was done for a class called "Materials and Techniques," formerly known as "Pen and Ink." It was, essentially, a class on inking techniques.

For the early assignments, I wanted to focus entirely on the use of the tools, mark making, line quality, etc. I didn't want the students to be concerned about the underdrawing at all -- so I had them ink pencils other than their own. I also wanted them to understand the level of work a true professional does -- so for their first major assignment, I had them ink over blue-line printouts of already inked comic art. I chose a Jack Davis Crypt Keeper piece and a Jack Kirby & Joe Sinnott Fantastic Four page. The following are some of the more successful examples of the students' results.  First up is Davis re-inked by Salina Trevino, followed by Cat Hajek Harris' take on the piece. Click on the pictures for more detailed views. 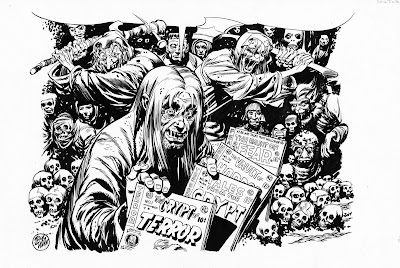 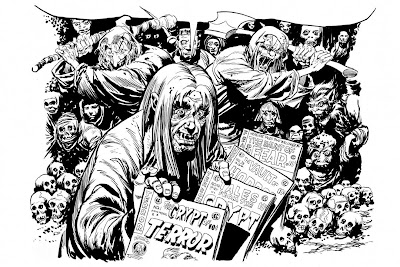 Now we have Sam Boyd's copy of Kirby/Sinnott, followed by Salina  and Cat's versions 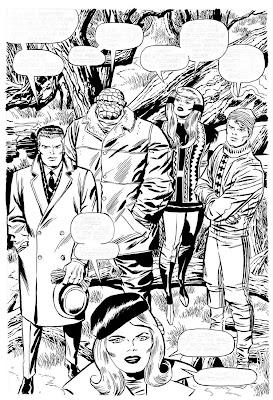 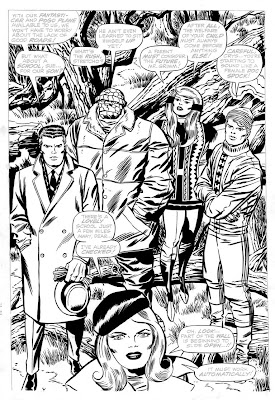 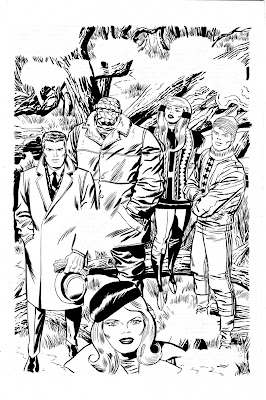 Another challenge I tossed at them was to take several vintage black and white movie stills, and ink over blue-lines of those -- turning them into drawings.  The first example is by Cat, followed by Courtney Billadeau's version of the same photo -- and her inks on pics of Boris Karloff and Veronica Lake. Caitlin Skaalrud's version of that unlikely pair follows. 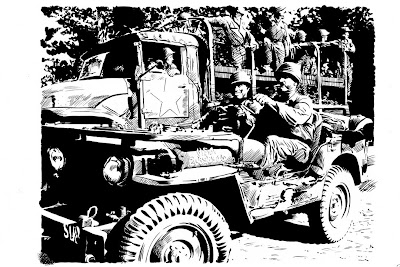 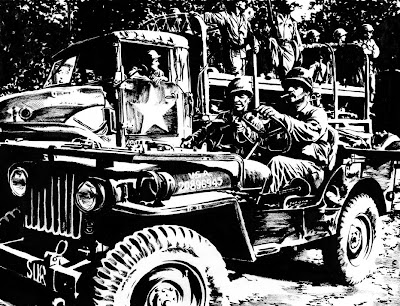 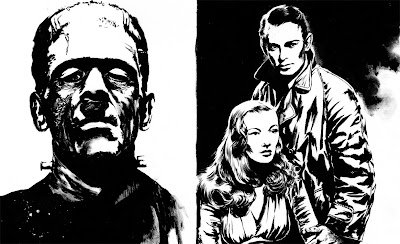 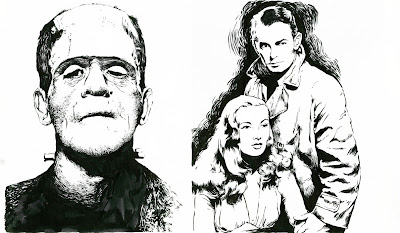 Eventually I gave them copies of pencils by pro cartoonists to ink.  Here's Salina and Courtney inking in a slick cartoon style. 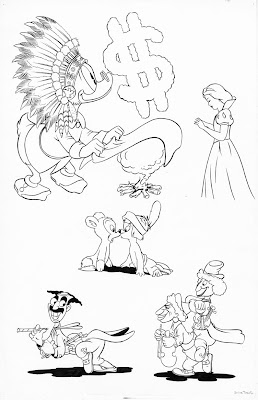 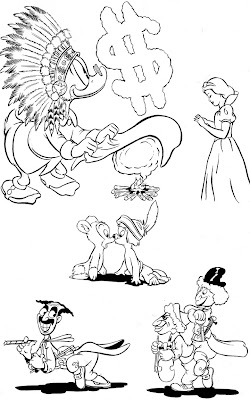 And to finish up this first post on this subject, here's Hedwig Vinson's inks over bluelines of a John Buscema  Tarzan pencil drawing.  As with a lot of Buscema's pencils, this was a bit rough and left a lot of room for interpretation.  As you can see, Hedwig finished the piece with a lot of style. 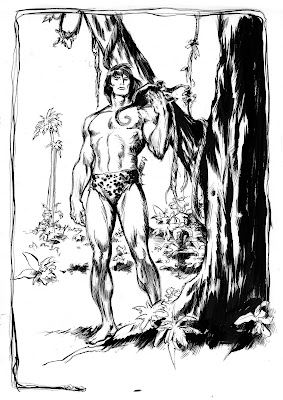 These were early assignments in this class -- eventually these students were inking their own pencils, with a few more attempts at inking the work of other pros in the mix.  I'll be posting some of those later assignments another day.
If you're one of my students and you'd like to see your work included, please note I can only post what I have on file -- so if you'd like to get additional scans to me, please do so.
If you're a comics publisher, editor or fan.  I suggest you keep an eye on these talented young folks.

Love the inking samples. They all showed the ability to jump in and not make the stuff too delicate. With the Kirby piece, I liked how all of them were able to capture the faces, and and still go in heavy for texture on the trees, and clothing. Sinnott is a great inker/finisher to study, because he was a great penciller who knew where to improve upon the pencils if needed. Good work all around!

They're all very impressive. Even when they are essentially traced work, that's not easy and you learn a lot!
People have been copying the masters of fine arts forever for that reason.
When I was in high school and college age I would sketch from other comic artists all the time to learn movement, composition, and inking.

I wish I had had a great teacher like Terry!

Thanks guys! You should know these students saw plenty of your work as examples of how it's done.