THE BUYER'S GUIDE FOR COMICS FANDOM -- a whole lot of covers!

The news that The Comics Buyer's Guide has ceased publication got me all nostalgic for the early days of the publication, when it was called The Buyer's Guide for Comic Fandom -- and I was a regular contributor.  I drew comic strips, wrote columns -- but mainly, drew covers. A few of those images can be found on line -- but I did a lot of covers.  So I went digging in my storage boxes -- and discovered that I only seem to have about two thirds of the tear sheets I should have.  My Spider-Man, Fantastic Four, Zorro, SHIELD covers -- and several more are nowhere to be found.  I'm hoping they are in some box I simply haven't thought to look in -- but I suspect they went missing several moves ago.  The original art for them has long been in the hands of various collectors. My Halloween and Christmas covers have been posted on the blog previously, so I did not include them here.

The worse news, is that in the process of sorting through my storage boxes, I discovered I can only find a handful of the oversized originals for the very first Ms. Tree story (from Eclipse magazine) -- and I'm fairly well convinced the missing pages are gone -- left behind in the attic of a previous home or accidentally tossed in some long-ago trash purge.  I know I'd decided not to ever sell any of them -- and they are not in the box they should be in. Sigh....

Oh well, it's only lines on paper, right?

Anyhow, let's look at my TBG covers (what I have of them, at least).

My first cover -- drawn long before I had any professional association with Batman. I drew that TBG logo, too -- as it's not the standard paste-up you'll see on the following covers. 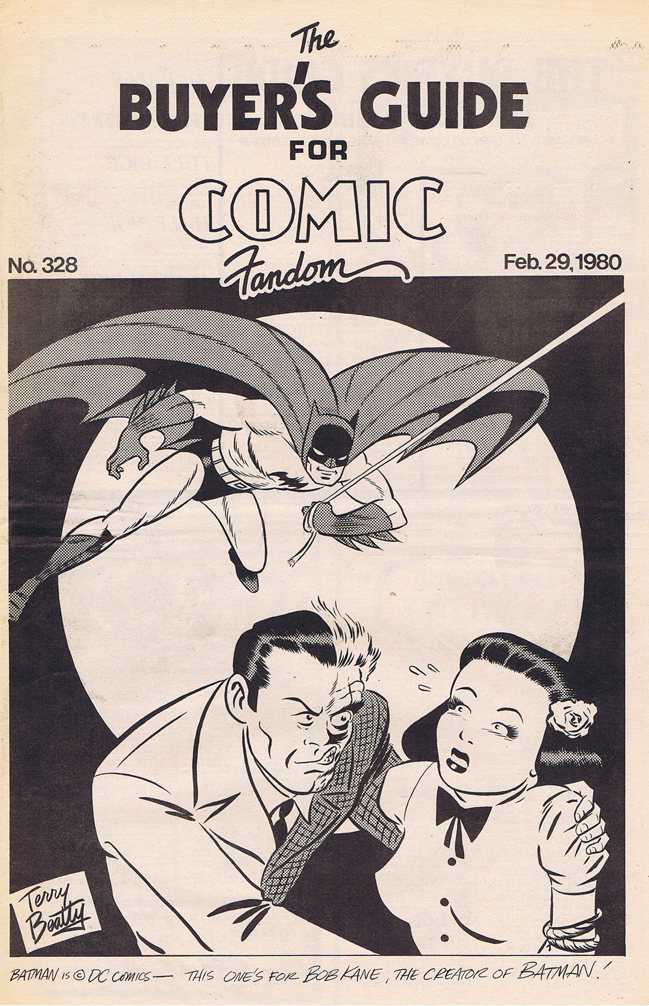 Most of my covers were tributes to cartoonists I admired.  I'd been reading reprints of Zack Mosely's Smilin' Jack comic strip when I drew this.  Zack contacted me after it saw print and we started a brief correspondence -- even called on the phone once -- I wasn't home, so he and my mom chatted a while! 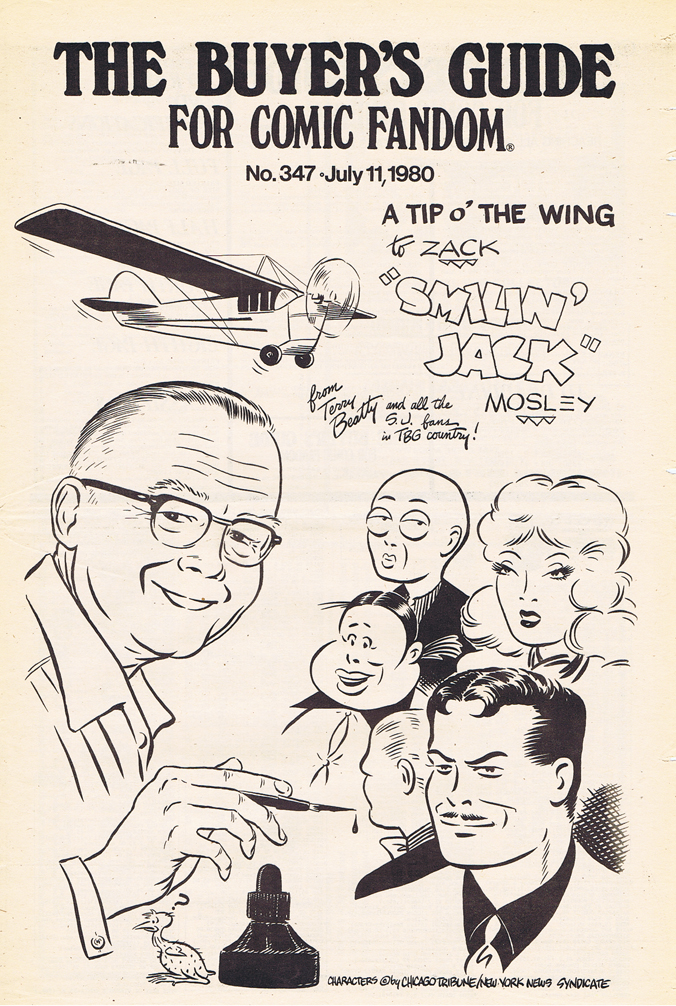 I'd been an underground comics fan since my early teens, scoring the forbidden mags by fudging my age on the order forms. My apologies to the mail order dealers I hoodwinked way back then!  But geez, I had to have my comics -- and once I'd seen Corben, Crumb, Deitch, etc. there was no turning back. 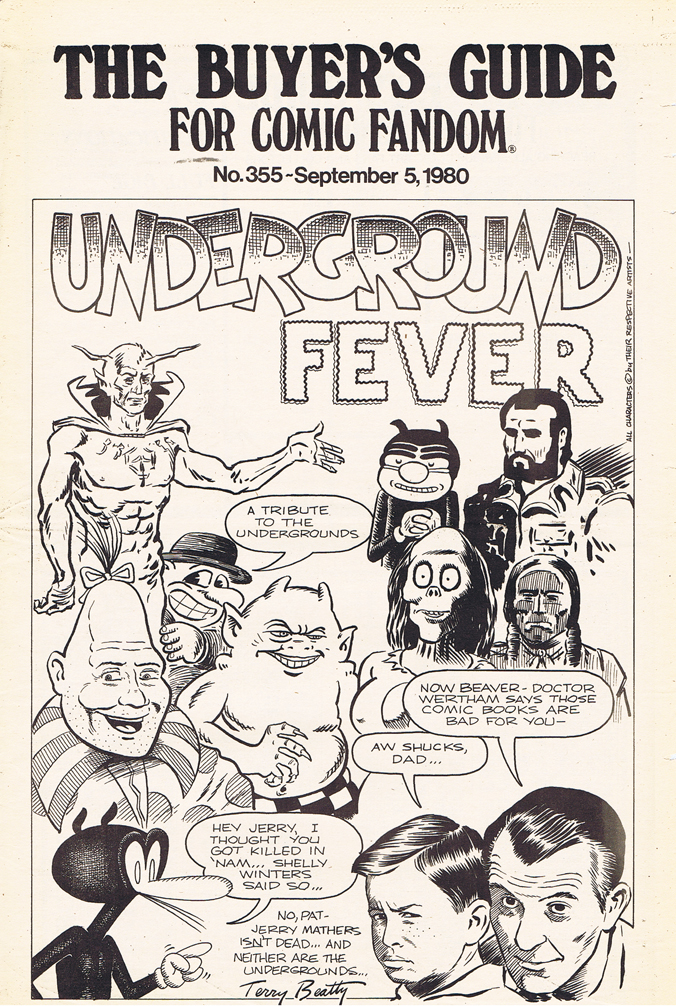 The EC Comics line was a favorite since the Christmas my parents gifted me the Nostalgia press oversized hardcover collection of EC Horror Comics.  Here, as usual, I'm aping the artists I'm tipping my hat to -- and spouting off in the word balloon. 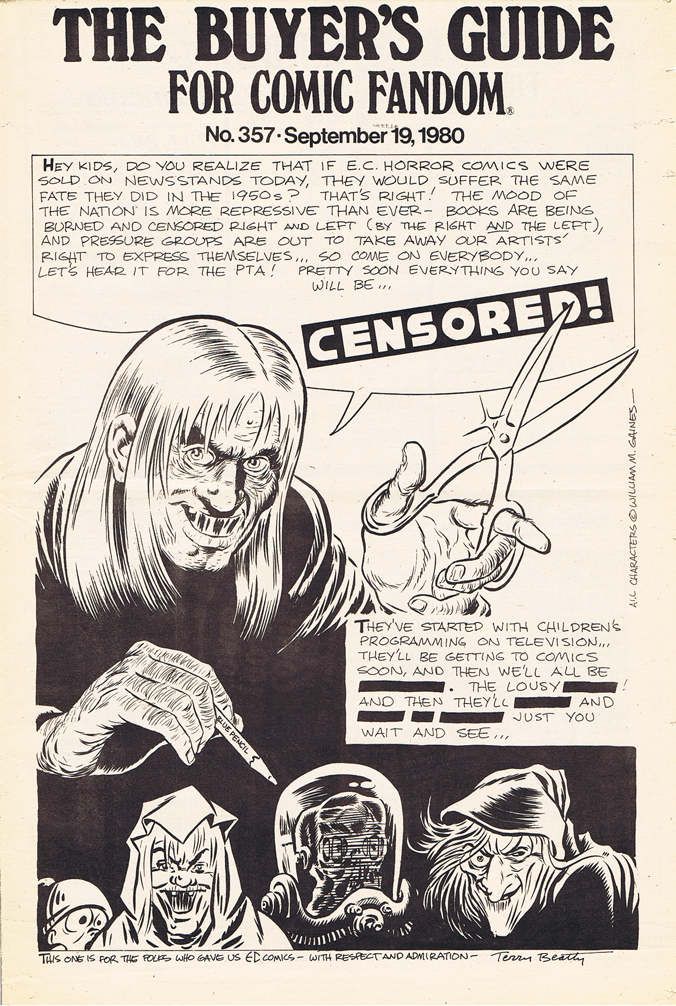 Will Eisner tribute -- where those white spots in the gray tones came from, I still don't know. 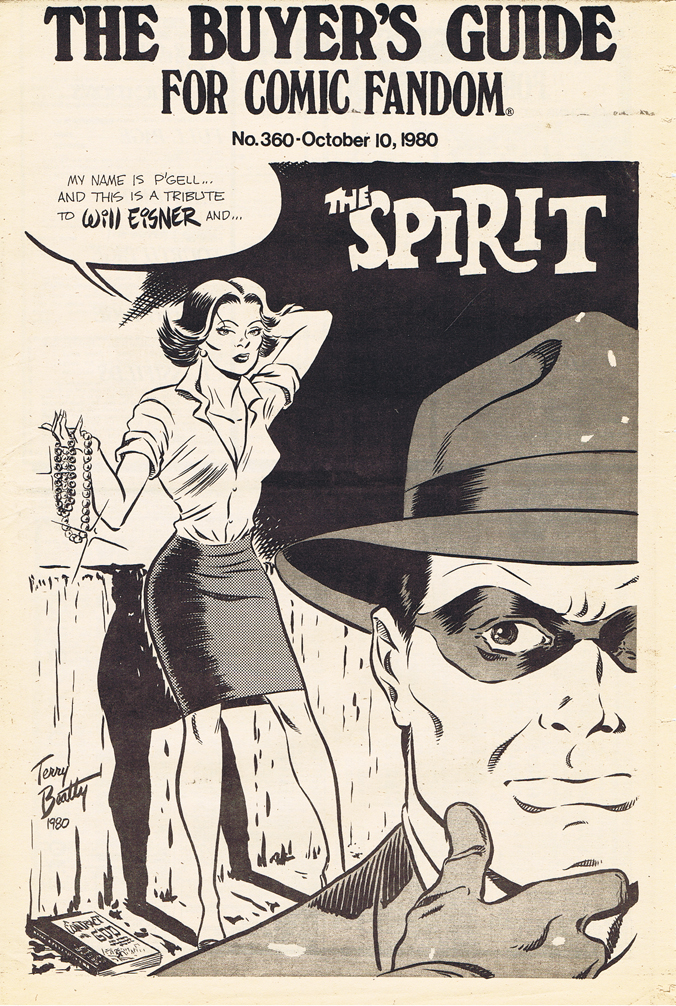 At this point, my friend, and frequent collaborator, Max Allan Collins was writing the Dick Tracy newspaper strip.  This piece was done in celebration of the 50th anniversary of the strip.  I'd started experimenting with color now on these TBG covers -- using mylar overlays, rubylith film and markers -- and cutting zip-a-tone for the dot patterns! 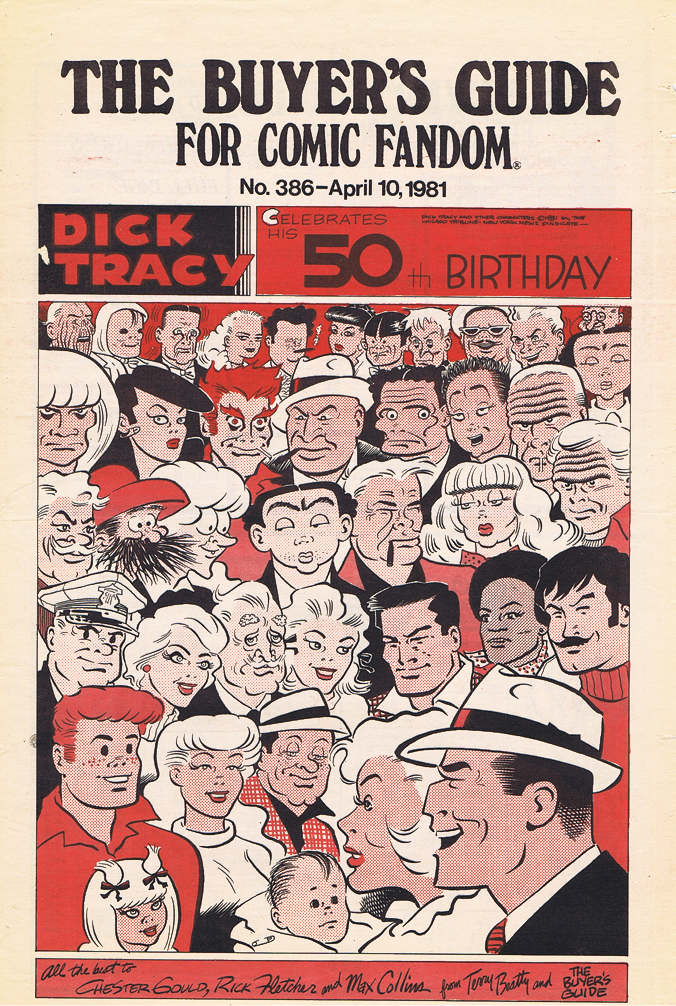 Max and I were doing the Ms. Tree and Mike Mist comics by '81  -- and, being all about self-promotion,  here they are on a TBG cover.  Ms. Tree is unfortunately long-necked here, and Mike is rather pinch-faced -- but hey -- early days.  That's me, playing dead on the floor -- and the background is my bedroom/studio of the period. I wish I still had that Chet Gould Dick Tracy Sunday original that's shown framed on the wall here....

The TBG cover Mike is holding shows a previous cover by me -- the Adam West Batman and my "new wave" character Marilyn Monrobot (yeah -- it was the '80s) doing the Batusi! 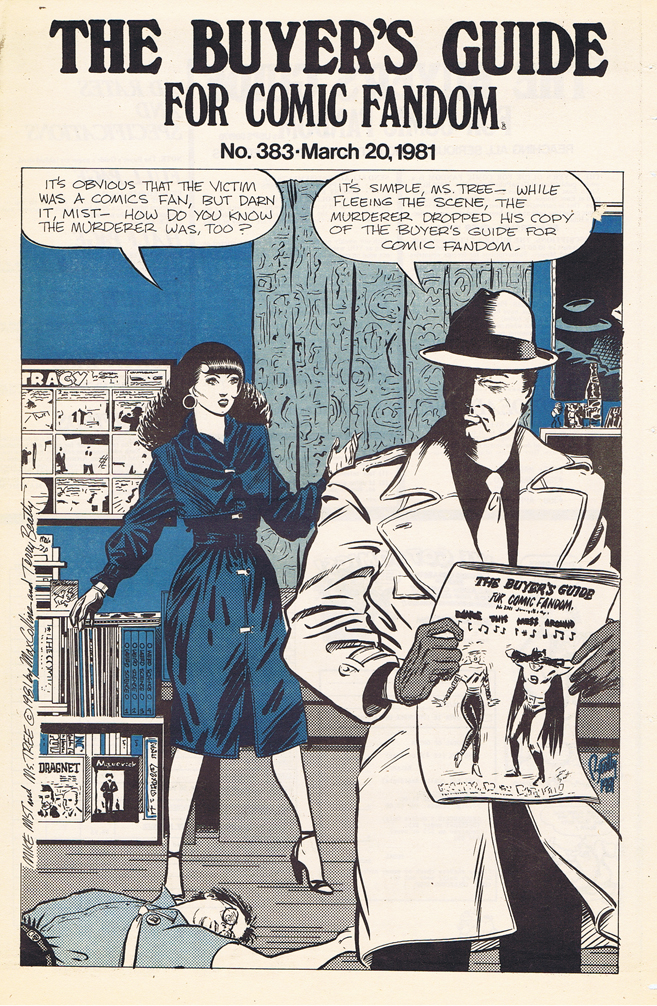 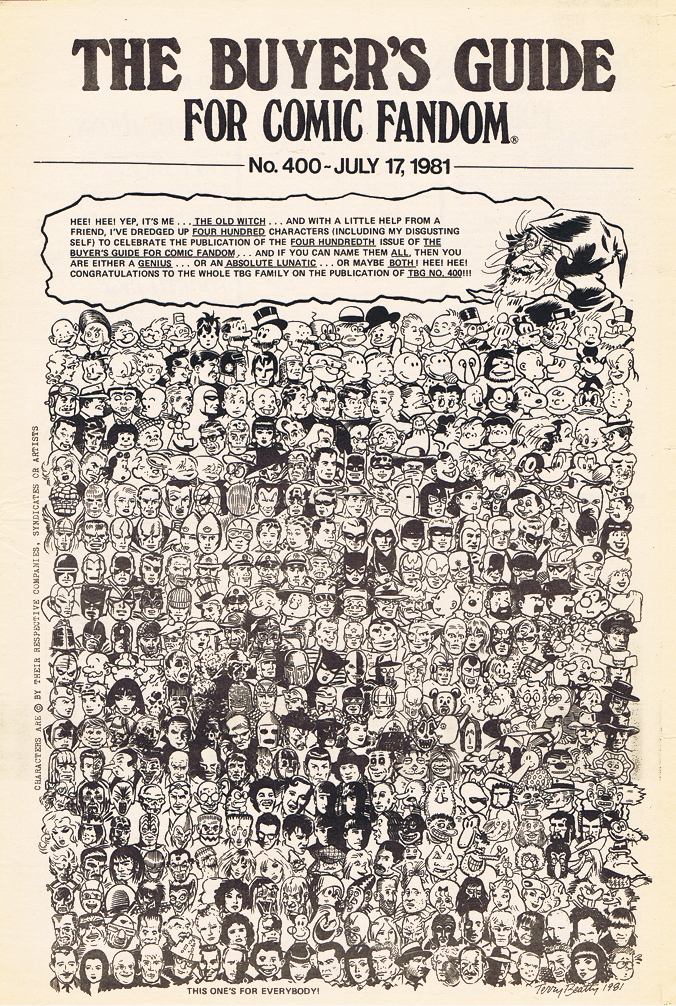 Showing some love for Steve Ditko in this Dr. Strange homage. 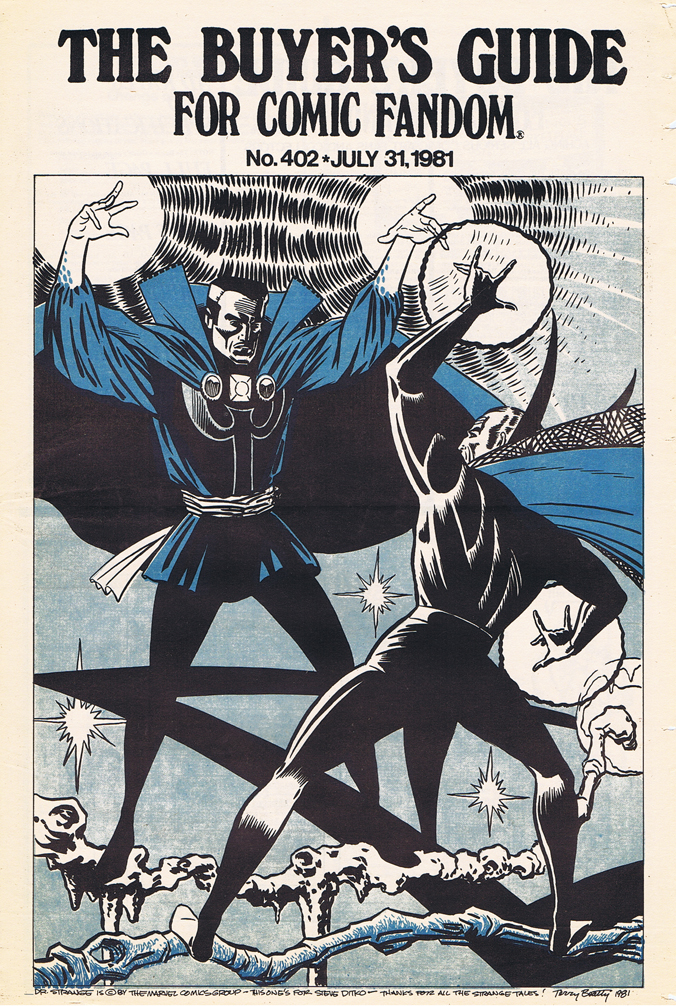 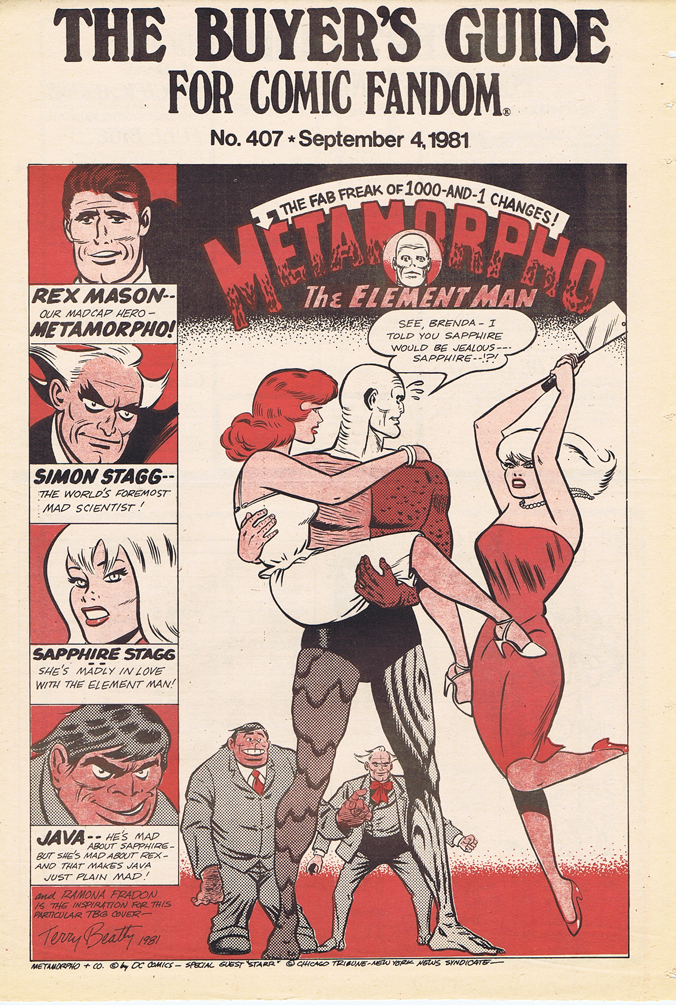 A plug for Max Collins' Nolan and Jon crime novels -- "sidekick" Jon was a would-be cartoonist and comic book fan. ECs and undergrounds were often mentioned in the books. 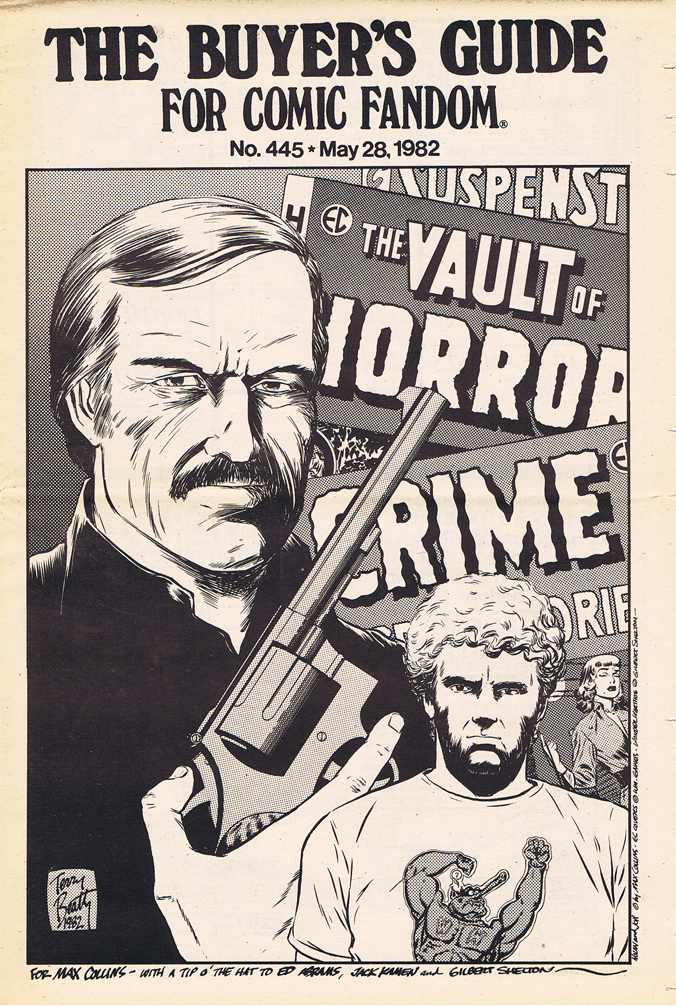 My first attempt at a TBG cover featured Shang-Chi, Master of Kung Fu.  Long lost, that drawing was submitted to publisher Alan Light several years before my first published cover. Thankfully, he had the good sense to reject it -- but I revisited the subject here -- using a photo of Bruce Lee as my model for the hero -- and Boris Karloff as villain, Fu Manchu. The Japanese sword is completely out of place, of course. 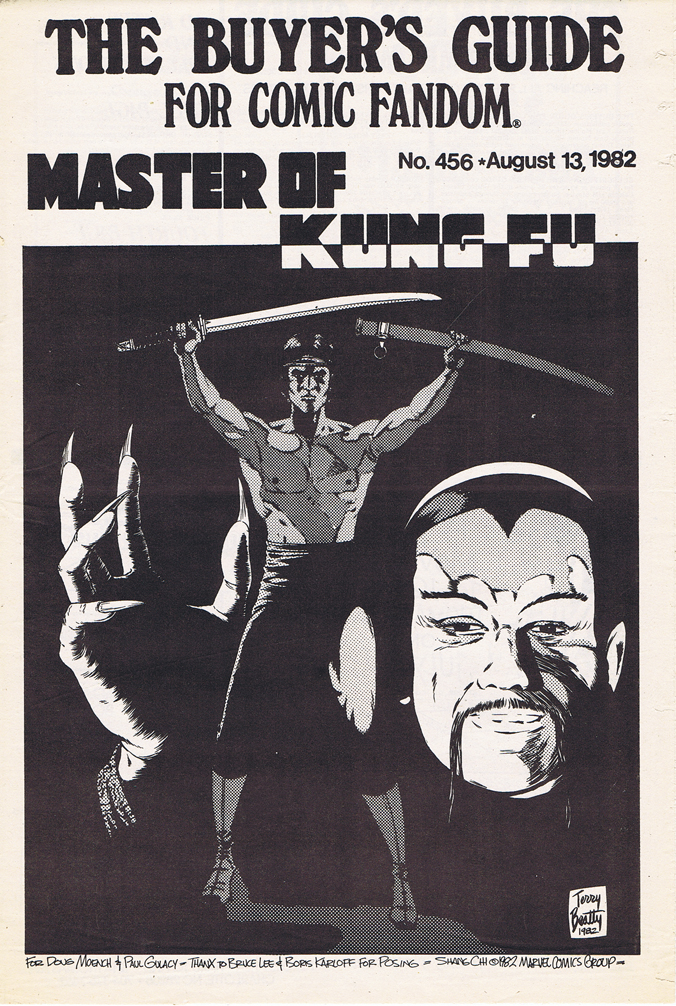 Two favorite characters at the time -- seemed to me they'd make an interesting team up. 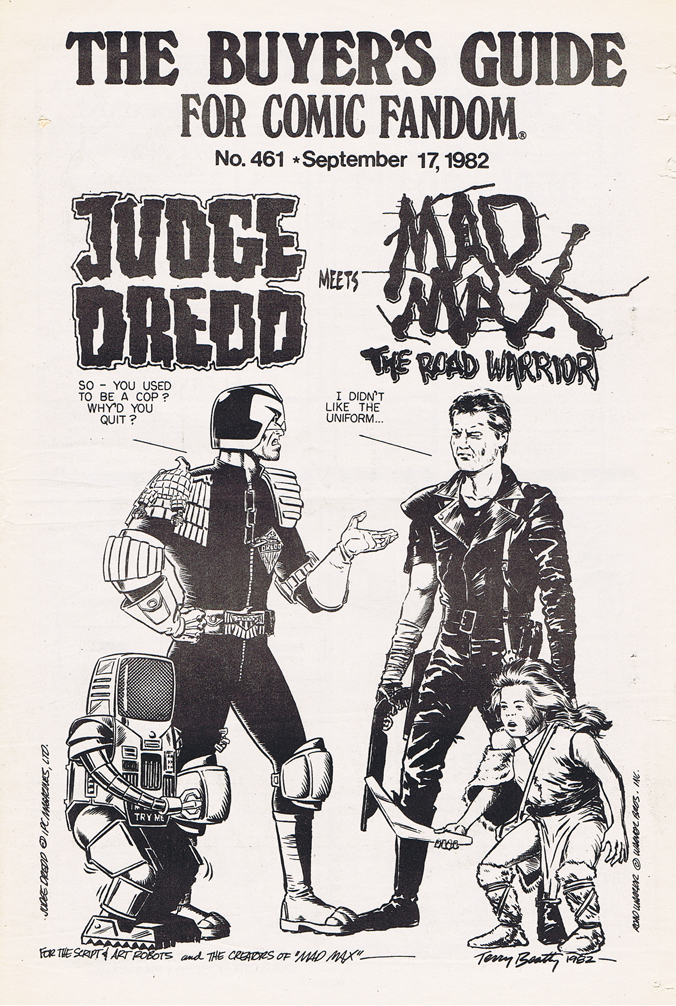 Jonah Hex -- one of two Western-themed covers I did for TBG -- the other teamed up E.R. Kinstler's Zorro and Silvertip. 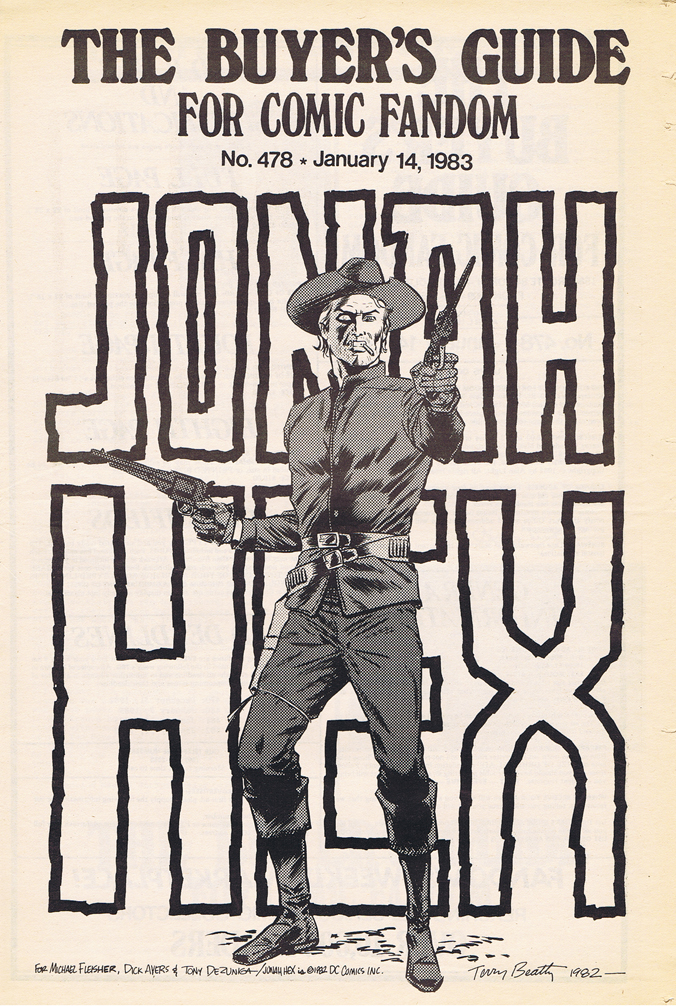 The final TBG cover, showing Alan and his mother Lavon wishing good luck to new editors Don and Maggie Thompson. Superman is holding a copy of the first issue of TBG -- and I obviously didn't know the "new TBG" would be "CBG" with the next issue. 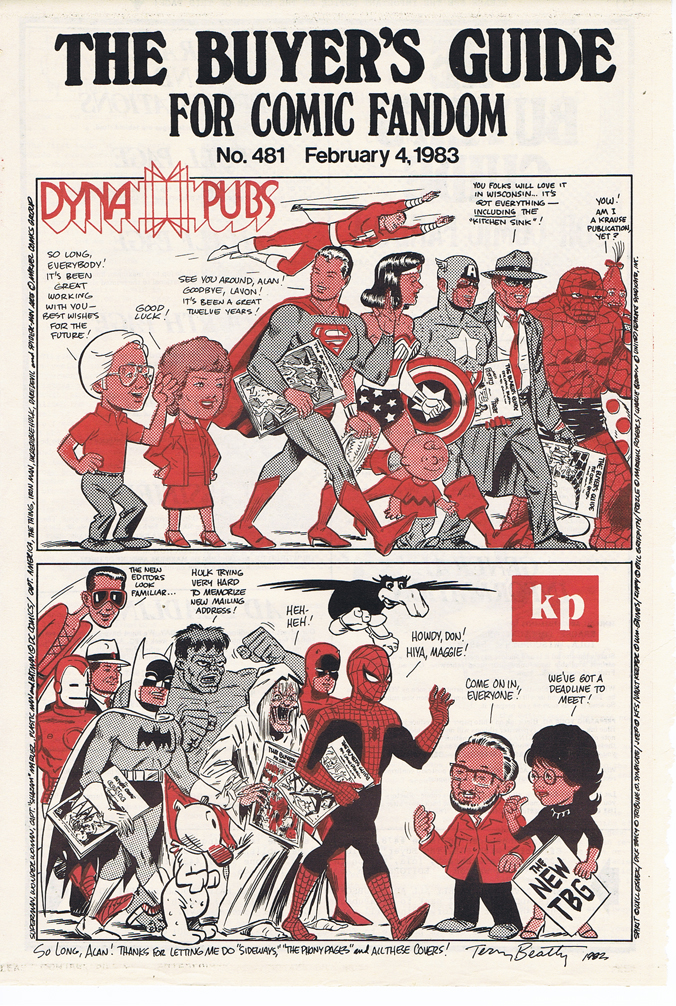 Out of order here -- but considering the subject, I thought I'd save it for (almost) last.  My tribute to Bud Sagendorf's Popeye. 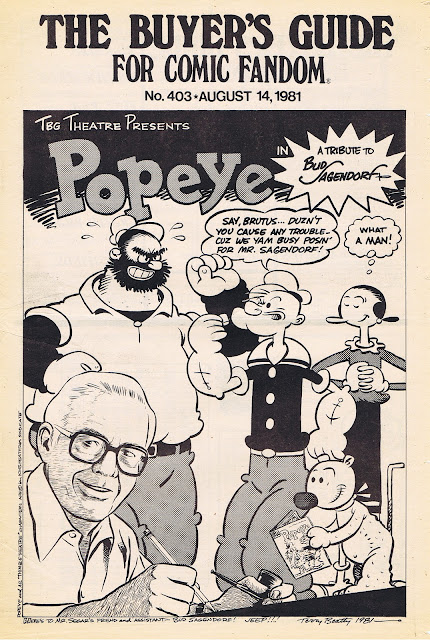 And a rarity here -- this Bizarro image was intended to be a TBG cover -- but never used.  The original art is still in my files. 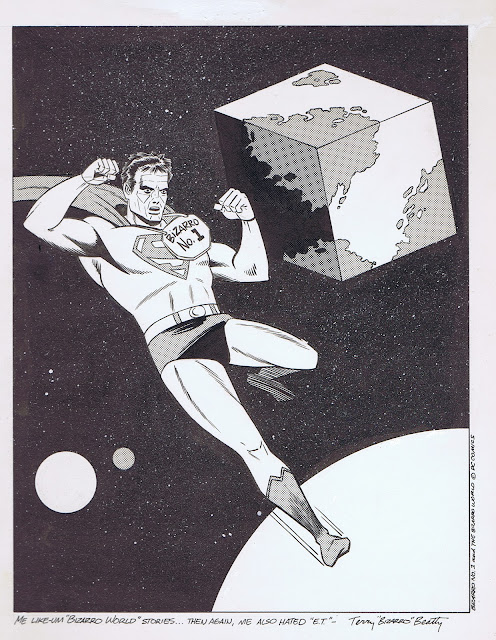 That's all for now.  If I turn up the other covers, I'll do a follow-up post.  Otherwise, if anyone out there has the missing covers in their files and could send me scans, I'd be mighty grateful.

When I had to eventually downsize my TBG collection, I kept many of the covers I liked and a majority are by you. Just last week I tried to scan the Spirit and Metamorpho covers above but couldn't get enough of them onto the scanner.

Great stuff. Thanks so much for all of them!

I have found the rest of my TBG cover tear sheets! I'll scan and post them as time allows.