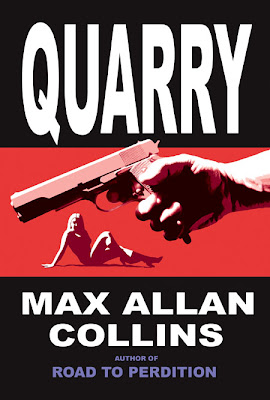 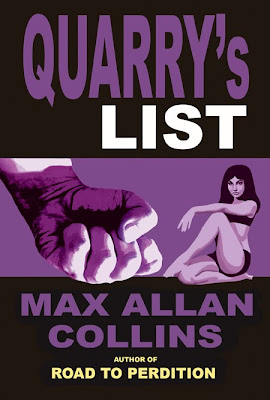 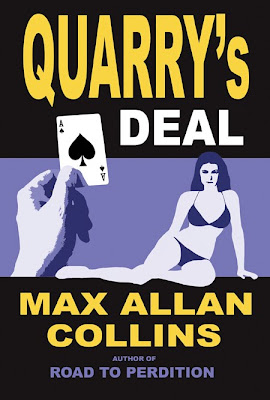 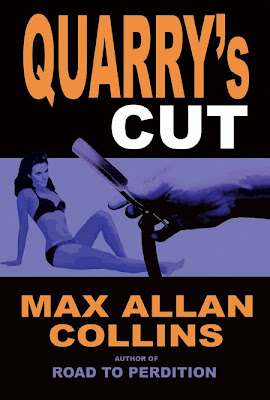 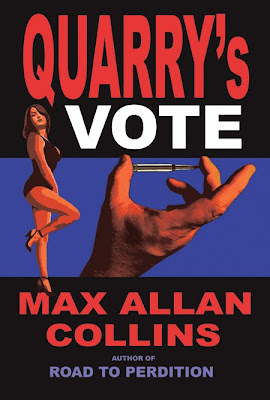 Those of you following my blog have certainly noticed I've not been posting much lately. I'd intended to post a few more vintage horror comics before Halloween -- but that never happened. I've been so busy at the drawing board -- and raising my son -- that the blog has been on the back burner for a bit.
In the news department -- The Adventures of Unemployed Man has been getting a crazy amount of press. Authors Gan and Erich even appeared on CNN (in costume!) for an interview.
Another comics project I'm involved with, Bela Lugosi's Tales from the Grave, has been similarly embraced by the media -- with positive reviews appearing all over the web and in print. Both titles are in stores now for you buy, should you so choose.
I'm also happy to announce that Max Allan Collins' first five Quarry novels are back in print, thanks to Perfect Crime Books -- all with new cover designs/illos by me (and new titles in most cases) -- all shown above. You can order then HERE.
I have a few commissions in the works -- just finished a website illustration -- did a little something for a model kit company (can't say what, so don't ask!) -- and am working my way through Return to Perdition (I'm about half way into its 180 pages). Oh -- there's another Scary Monsters cover waiting to be created, too. Don't stop checking this blog, though -- I will still be posting here -- but probably not as often as I had been (for now).
Oh, I do want to give a plug to Netflix's streaming video service. We recently dropped our cable TV subscription and switched to on-air viewing (mostly PBS kids' shows for the youngster) and Netflix. With a DVD player that's Netflix ready, I've been able to catch up on a lot of the movies I've missed in the theater since the youngster came along. I recently enjoyed Let the Right One In, Survival of the Dead, Red Cliff, OSS 117: Lost in Rio, Big Man Japan -- as well as documentaries about Henry Darger and Ron English. I'm getting my wife hooked on the mid-'70s BBC mini-series, Poldark (it's as good as I remembered it) and checking out Slings and Arrows, thanks to a friend's recommendation. For the price, it's a heck of a great deal, and a boon to a freelancer/stay at home dad like me. End of plug!
Posted by Terry Beatty at 11/12/2010 09:17:00 AM

And just to follow up on Terry's words on the Lugosi comic book (in shops now; if out, tell your shop to back-order it from Diamond!) -Sam

The Bela Lugosi horror comic was the lead feature online at USA TODAY.

"Finally, I reviewed BELA LUGOSI’S TALES FROM THE GRAVE #1 in this week’s AICN COMICS REVIEWS Indie Jones section and it’s a comic you horror-fiends may want to check out. The book was released from Monsterverse this week. You can read my full review of this fantastic horror anthology starring everyone’s favorite classic vampire written and drawn by some extremely talented folks by clicking here."
http://www.aintitcool.com/node/47312#11

"After much anticipation, BELA LUGOSI'S TALES FROM THE GRAVE has arrived in comic shops and is stunning!" http://tinyurl.com/2wps5l4

"Do you know what book you have been waiting for the most this year? ...it's this one" -COMIC RELATED http://tinyurl.com/2bj9fdx

"BELA LUGOSI'S TALES FROM THE GRAVE is the Best Anthology Comic Book I've read and review-blogged so far in 2010!" -M D Hamersky, MAKE IT SO MARKETING
http://makeitsomarketing.tripod.com/popularcultureblog/index.blog/2078875/my-take-on-bela-lugosis-tales-from-the-grave/

Here is link to a PREVIEW web page with eight pages of artwork.
http://monsterverse.com/lugosi-01_preview8.jpg

MONSTERVERSE ENTERTAINMENT is a transmedia company headed by its publisher and editor, the comic book and film design artist, Kerry Gammill.

Keith Wilson, formerly of DC Comics, is an editor and writer/artist.

Producer/screenwriter Sam F. Park is the west coast editor and a writer/artist.

LOVE the Quarry trade dress. Clean, well-balanced layouts with simple, striking images and an admirably restrained type treatment. Good, classy design, which is all too rare these days.