One of the reasons I love living in the Twin Cities is its vibrant music scene. There's not a night of the week that I can't go see some great live music -- often for little or no cover charge. Two bands I've seen a lot lately are pictured here. 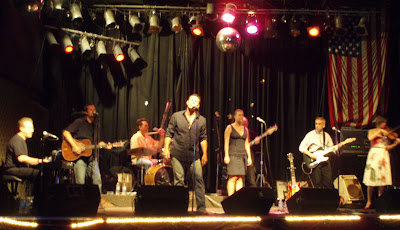 Memphis and the Meantimes (John Hiatt fans will get the refererence) play most every Sunday night at the Minnesota Music Cafe in St. Paul. It's an "all star" band that features Mick Sterling (vocals), Tony Sims (vocals & guitar - missing the night this pic was taken), Lisa Wenger (vocals), Dan Neale (guitar), John Wright (bass), Lisi Wright (fiddle), Dave Burkart (guitar), Peter Guertin (piano) and Bobby Vandell (drums). Song choices are mostly roots country, with a lot of Sun Records artists thrown into the mix -- if you like Carl Perkins, Wanda Jackson, Roy Orbison and such, you'll like this. They get an early start (7:30-ish) and when done, a few band members stick around for an open mic set by the bar. All in all, a great night of music for a five buck cover. If you go see 'em, request that Dan sings "Hot Rod Lincoln."
More info: http://www.myspace.com/memphisandthemeantimesband 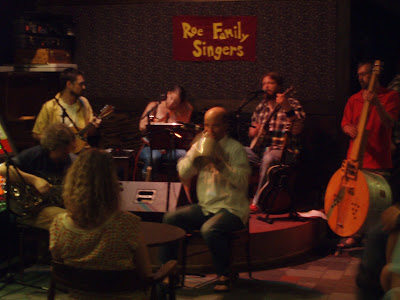 Monday nights find The Roe Family Singers at the 331 Club in "Nordeast" Minneapolis. A formerly notorious biker bar, the 331 has been refurbished and remade into a classy nightspot with music darn near every night -- and no cover charge. The Roe family (only two of 'em are really family -- it just sounds good as a band name) have been playing Mondays there for two years solid. Starting around 9:00 and ending at 10:30, it's a sweet, short musical set -- and a great way to cap off a Monday night, even if you have to work in the morning. This bluegrass/folk/jug/roots country band has a set list that includes numbers by The Carter Family and Hank Sr. -- so if that's your thing, you'll like this crew. The "family" varies week to week -- they recently lost their broom player (yes, broom player!) -- and guitarist Dan Gaarder and saw player (yes, saw player!) Adam Wirtzfeld were missing the night this pic was taken. More here: http://www.myspace.com/roefamilysingers
Posted by Terry Beatty at 7/03/2007 12:31:00 PM